After weeklong outage, Ocracoke and Hatteras islands get power back 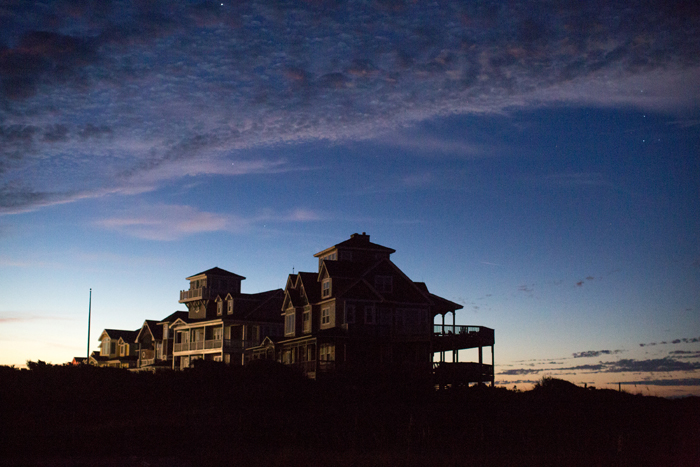 Homes along the coastline of Hatteras Island in North Carolina sit in darkness as the sun rises on Tuesday. A power outage has left several towns in the Outer Banks without their vibrant tourism industry as crews try to restore electrical service. MUST CREDIT: Photo by Logan Cyrus for The Washington Post.

RALEIGH — Power was restored Thursday to two North Carolina islands after a weeklong outage that hit the local economy at the height of the lucrative summer vacation season.

Cape Hatteras Electric Cooperative announced that transmission lines were pumping electricity to all of Hatteras and Ocracoke islands.

Visitors will have access to both islands starting at noon Friday, according to a statement from the governor.

“Residents and businesses on Hatteras and Ocracoke are ready to welcome visitors back to share their beautiful beaches and unique history and culture,” Gov. Roy Cooper said.

Robin Jennette, a manager at Conner’s Supermarket in Buxton on Hatteras Island, said the grocery store is stocked and ready for tourists to return.

The store stayed open on generator power during the outage, but business dropped sharply after thousands of visitors were ordered to evacuate.

“We have to depend on our summer visitors to get us through the rest of the year, so we’re just sorry that it happened at all,” she said.
Power was cut to both islands a week ago when construction crews working on a new bridge plunged a steel casing into underground transmission lines. The accident happened as workers were moving the tube-like casing between uses and stuck it in the ground temporarily, state transportation officials said. The casing is used to ensure the concrete pilings supporting the bridge are the proper angle and depth.

The outage forced an estimated 50,000 visitors to leave Hatteras and Ocracoke islands, and others never made it to the popular vacation spots because of evacuation orders for the two islands.

Visitors whose vacations were shortened or canceled are working with travel insurance providers and property owners to recoup lost money.

Local businesses, meanwhile, have filed at least four lawsuits against the construction company, PCL Construction. Many seasonal businesses close for a third of the year, so the summer months are crucial to their bottom lines.

“PCL understands the inconvenience caused by the outage,” the statement said. “We are working to provide assistance to those affected and more information will be available shortly.”

Utility crews worked to evaluate the damage and ultimately decided to erect new overhead cables to connect the island power grids to transmission lines that run along the bridge. In the days after the outage started, officials estimated it could take weeks for power to be restored.

After learning power was restored Jennette, the supermarket manager, said: “We’re really glad that it didn’t take as long as they originally thought.”