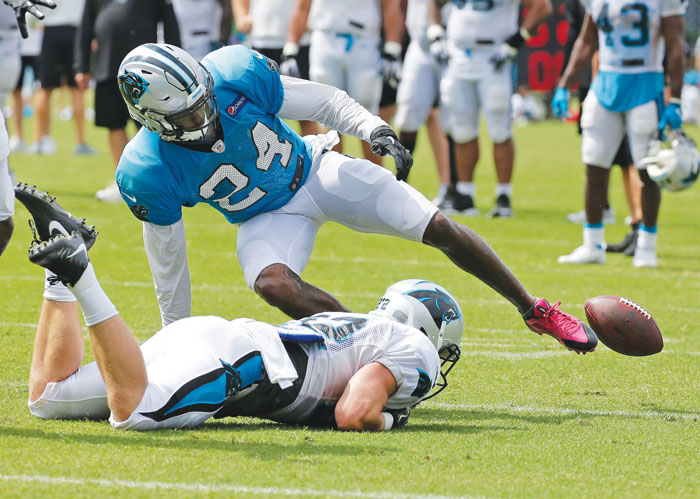 SPARTANBURG, S.C. (AP) — Panthers coach Ron Rivera endured a rough season in 2016 after being forced to start two rookies at cornerback following the release of Josh Norman and the retirement of Charles Tillman.

This year he’s looking forward to having James Bradberry and Daryl Worley in the starting lineup.

Both battled through early season rookie growing pains but clearly got better as the season went along. Now the 6-foot-1 cornerbacks are viewed as building blocks on a Carolina defense loaded with veteran talent like Luke Kuechly, Thomas Davis, Julius Peppers and Kawann Short.

“Based on how the season ended, I’d say it was a bad thing” they were forced to start as rookies, Rivera said. “But now looking forward, you could say it’s a good thing because they’ve gotten an awful lot of experience. And when you watch them now they don’t practice like second-year guys. They practice like pros.”

It was hard to justify former general manager Dave Gettleman’s decision to release Norman last offseason coming off an NFC championship, especially when Matt Ryan and Drew Brees combined to light up Carolina’s defense for more than 950 yards passing in two early season games. But Bradberry and Worley are thankful they were thrown into the fire right away.

“I think it was well worth it,” Worley said. “I feel like I’m a better player for it just knowing what to expect now.”

The Panthers have made it easier this year on Bradberry and Worley.

They’ve added two veteran free agents in nickel back Captain Munnerlyn and safety Mike Adams to help bring the young CBs along even faster. Rivera acknowledged he was trying to steal a page from 2015 when the Panthers had Tillman and safety Roman Harper guiding a young group of defensive backs and wound up reaching the Super Bowl.

Adams, who is entering his 14th seasons in the NFL, said he’s amazed at how far along the Bradberry and Worley are for second-year cornerbacks.

“The way they grew and the way they developed — they’re smart, fast, tough, they compete,” Adams said. “And that’s the main thing. They compete and practice hard every day. I mean, everybody makes their mistakes but one thing about them they come back and make a play after that mistake.”

Bradberry, the team’s first-round pick in 2016, is viewed as the budding star of the secondary and a potential shutdown cornerback in the mold of Norman. Munnerlyn, who returned to Carolina after a stint with the Minnesota Vikings, said Bradberry is “the real deal.”

“He is big. He is physical. He knows how to cover,” Munnerlyn said. “And he can go get the ball.”

Worley is almost as big as Bradberry but a little rawer in terms of talent and relies more on his speed.

He likes to gamble a little more than Bradberry on defense.

Worley is known for being a little more vocal and social, often seen hanging out with his teammates at training camp. Bradberry is more cerebral and teammates refer to him as the “silent assassin.” He can often be found retreating to his dorm room after practice for a nap.

Together, they work well together on the field and have forged a good friendship — one that Worley hopes will last for the next decade or so in Carolina.

“We want to compete as hard as we can and if that keeps us together for 10 to 12 years in Carolina then that will be amazing,” Worley said. “I would love it. As long as they want us here and we are making plays, then that would be great.”

NOTES: QB Cam Newton only threw two passes as practice on Wednesday as he continues to battle back from soreness in his shoulder … Rivera said he hopes to get LT Matt Kalil (groin) back at practice, but isn’t sure when DT Kawann Short (back), WR Curtis Samuel (hamstring) and CB Corn Elder (knee) will return to work. … Carolina signed CB Devonte Johnson after waiving WR Cameron Posey.