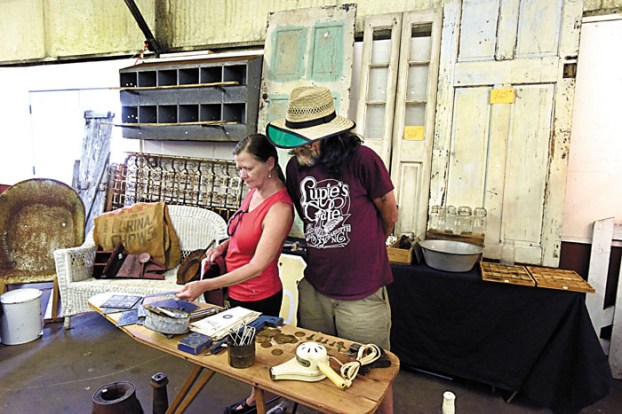 Sharon Ghant and Scott Walter from Weddington look over items on a wooden ironing board at the Carolina Pickers Festival. Vintage wooden doors and panels are behind the couple. They are "pickers" themselves. photo by Wayne HInshaw, for the Salisbury Post

Carolina Pickers Festival: One man’s junk is another man’s treasure

SALISBURY — Well, what is a picker anyway?

Now you have the starting clue to what the Carolina Picker Festival is.

Shane Benfield and his father, George, organized the first Pickers Festival at the Rowan County Fairground last weekend. Walking around the grounds, Shane and his dad posed for a photo beside an old horse-drawn hayrack on display.

Shane was able to gather 70 vendors who shared his idea that pickers could show, sell and trade their valuable items and the crowds would come to buy, sell and trade with the vendors. Shane hopes that the festival will be an annual one or just maybe twice a year based on the turnout and interest.

Pickers like to “bargain” with the buyers. Price tags are rare at a pickers show. Many sales start with the vendor saying, “Make me an offer” or “What will you give me for this?” and always, “Maybe we can work out a trade.”

Shane vetted the vendors hoping that the items they showed would predate the 1970s and be of good quality. He stressed that he did not want flea-market or yard-sale type of goods.

“Pickers want something old and unique,” he said.

Hundreds came to the fairgrounds for the two-day festival. Vendors and buyers came from as far away as New York and Florida and places in between like Georgia, Tennessee, South Carolina and Kentucky.

Shane said he wanted the show to be a pickers event and not a craft show. However, he did invite Salisbury’s Matt Hatley to sell and demonstrate his “chainsaw carvings craft.” Shane said the craft is an old folk art associated with the mountains, as well as the Piedmont, and he wanted Hatley at the show.

Hatley was carving on a red cedar piece called “Mushroom Grinning.” He explained that Native Americans had a special feeling about red cedar trees and the items from the wood contain spirits that were to be respected.

Mike Whitaker of Mocksville offered a handmade electric train large enough for children to ride for $6,500 or for trade. He said the train was constructed in the 1930s in Mocksville and it ran at the park there until the 1990s. It was stored then, and slowly its shiny bright yellow, green and red paint started turning to rust. But it can be saved and have a new life with a new home and owner.

Remember the old saying, “One man’s junk is another man’s treasure.”

Pickers Shanon Ghant and Scott Walter of Weddington were looking at items assembled on an old wooden ironing board with a background of wooden house doors and windows,

Chuck and Yvonne of Statesville were interested in a metal well bucket that someone else purchased right from under them. Chuck did get a “smoke stack wind preventer,” as he described it. It was a metal device that attached to top of your chimney to keep the rain out with a top that turns with the wind. Chuck was told that it might have been made in France.

Desiree Brooks of Greensboro had some fun with an old ophthalmologist set of lens from an “eye doctor.” Trying out the glasses, she was sure that they would create more headaches than they would ever prevent for her.

If you needed a 1960-70s Standard Oil Service Station electric Bennett 4000 gas pump, well, you missed your change. An Augusta, Georgia, vendor had to take that beauty back home with him.

Walking out the gate at midafternoon, I spied a slightly rusted 1954 Chevy still available for purchase to be used as “yard art. ” It was available for $ 1,500.

Maybe we are all pickers. There must be many “valuable items” in your attic that you have collected over the years. Shame on those of you who thought these valuable items were junk.

CHINA GROVE — A goal that was difficult to imagine just one year ago is inching closer to becoming reality... read more