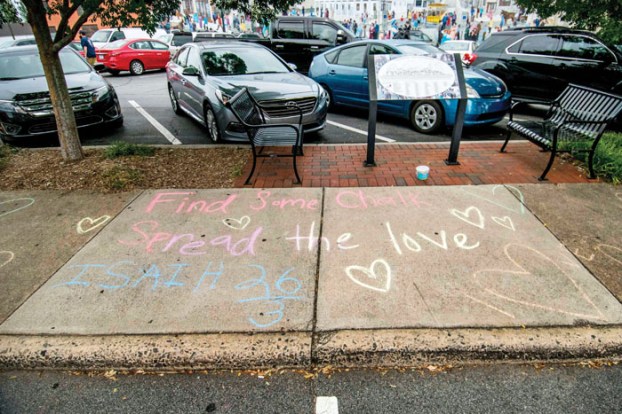 The sidewalks and street in front of Go Burrito on West Fisher Street in Salisbury were covered with chalk hearts, a bible verse, pleas for love. Last Saturday morning, two people were killed, and several injured just outside the restaurant. 7, in Salisbury, N.C. Jon C. Lakey/Salisbury Post

William Clark: Shootings are tragic wherever they happen William Clark is a student of American Studies at the University of North Carolina at Chapel Hill and a proud resident of Salisbury.

Following the recent and tragic altercation of the morning of July 29, I have born (digital) witness to both the moving onslaught of emotion from the family and friends of the victims and the necessary reciprocation of support from the community. My heart goes out to the first category, and, to the second, my praise. This is what’s called for.

But not everyone in this city I love has answered the call. More than a few, in fact, have stuck their head out from the proverbial woodwork and safety of their untouched suburbia to express their fear that “this-might-happen-to-me,” their disdain for this “violent” city.

There is an awful and insurmountable violence here, obviously, but we can rightly call this kind of coding (“high crime-rate,” “violent”) a racist coding, a second violence that actively allows for this first to persist.

These people should want to get out of dodge, abandon Salisbury to bar the violence that will, I remind you, never reach them. They are protected by this city and its law in ways that the young black men who died and who were hospitalized are, infuriatingly and embarrassingly, not.

It is this unnecessary, programmatic, and white self-interest that has killed these young men as much as the bullets. What is needed here is a serious attitude correction.

One person responded to the event in the WBTV press release: “It’s shocking to be in this area, because it’s always been in a community, or apartments or things like that. But when you come out in the open near a church, hey that’s showing no respect at all.”

I’m sorry you were disrespected, sir, but, hey, at least you’re not dead.

As that man and, I should say, a great many others in this city would have it, this kind of violence, should be confined to the privacy of the apartment. I can only guess at what he is projecting here, but murder is murder, pal; dead (black) bodies, still dead (black) bodies.

Why is it that this outcry is only heard when the violence comes to White Downtown? I dare say the pain of this tragedy should infect every public zone, every church, every sacred space and disrespect it, profane it; we should feel this pain with our brothers and sisters who are affected most specifically, most painfully (the victims and families), and it should hurt.

Lest we forget, here are the facts: Da’Quan Robinson, 23, and Anthony Eugene Gill, 22, are dead. We are all responsible and owe it to the deceased, their families, and this city to stick around and think on our sins.

William Clark is a student of American Studies at the University of North Carolina at Chapel Hill and a proud resident of Salisbury.

Mollie Ruf: Stand up for Salisbury and get involved

By Mollie Ruf Special to the Salisbury Post Back in the spring I was invited to attend a training session... read more