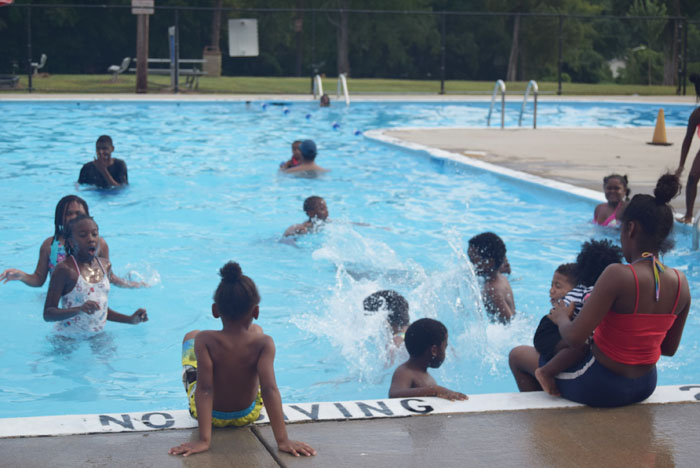 Families of all shapes and sizes came out Tuesday for a free swim at the Fred Evans pool as part of National Night Out. Those who attended said the celebration helped ease tensions from a violent weekend. Rebecca Rider/Salisbury Post

SALISBURY — The sound of music and the smell of hot dogs on the grill filled the grounds of the Fred M. Evans Pool on Tuesday night.

The community was invited out for a free swim, food and games as part of a National Night Out celebration.

It was a party that was also under way at 19 other locations across Salisbury.

National Night Out, which typically is observed the first Tuesday in August throughout the country, was founded in 1984 to promote police-community partnerships and build neighborhood camaraderie.

The nighttime observance also increases awareness of law enforcement programs such as neighborhood watch and other anti-crime initiatives.

Teri Shaw of the Salisbury Parks and Recreation Department said the pool at Old Concord Road and East Monroe Street has hosted a National Night Out event for years, but it was amped up for 2017.

“We made it a true National Night Out block party,” Shaw said.

Parks and Recreation employees grilled hot dogs and served Cheerwine while guests bounced to the beat blasting from a DJ’s speakers. Music was sponsored by Anasa Lattimore with Spoken Angels, Shaw said. The Salisbury Police Department provided the Cheerwine and several promotional banners.

Pool admission was free from 6 to 8 p.m. The clear blue water filled up quickly with children, parents and those seeking a care-free evening.

For many in Salisbury, the observances broke tensions that had built up over the weekend and helped restore a sense of normalcy.

Many residents have been on edge after a bloody three days that saw the violent deaths of three young people. An early-morning shooting in the 100 block of West Fisher Street on Saturday left Salisbury natives Da’Quan Robertson, 23, and Anthony Eugene Gill, 22, dead, as well as two others wounded. Monday morning, Shawn Alexander Spry, 21, also of Salisbury, was found dead from an apparent gunshot wound on South Link Avenue.

But tensions were forgotten — or at least put on the back burner — for Tuesday’s celebrations.

“It kind of lightens that sense of uneasiness,” Shaw said.

“I think the community needs to have something like this,” Claudette Allen said.

Allen was at the pool with her two grandchildren, ages 6 and 2, and said it was a good chance to get out of the house.

For Salisbury native Vanessa Lowe, it was a chance to meet others who live in the area. Lowe used to participate in National Night Out  when she lived at Laurel Pointe. She didn’t realize there was an observance at Evans pool until she and her daughter were driving by and saw banners advertising it.

The swimming was free, but Lowe said she thought it would be worth charging a dollar or two if it means the community could have more gatherings like it. It was great for families, she said. Lowe was accompanied Tuesday by five grandchildren.

She said she thinks such events would help strengthen community ties and that, in turn, might have an effect on violence in the community.

“I think if we did have more community gatherings, things wouldn’t be so hush-hush,” she said. “…People would start speaking out.”

Albert Shaver said the celebrations are “a way for the city to come together” and emphasized that more community gatherings could help keep kids on the right path and lessen fears.

“Kids can play, eat and not have to worry about violence,” he said.

For many who were shell-shocked by the past few days, Tuesday was a reminder of what Salisbury could be.

“I know what Salisbury’s all about,” Shaw said, “and it’s a family feeling.”