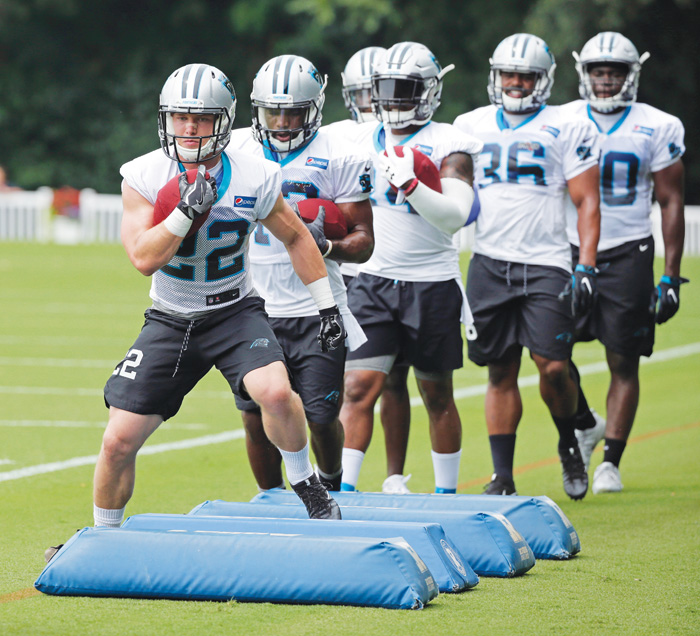 SPARTANBURG, S.C. (AP) — Christian McCaffrey remembers running around his backyard as a young boy playing tackle football, dodging his brothers while pretending to be Barry Sanders.

All of those moves have paid off for the Panthers rookie running back.

McCaffrey created quite a buzz during his first week of training camp with veteran players and coaches raving about his athleticism and ability to make people miss. There hasn’t been this much anticipation from fans over a Panthers rookie since 2011 when quarterback Cam Newton was drafted No. 1 overall.

Panthers veteran running back Jonathan Stewart, who rarely heaps praise on anyone — said McCaffrey is “pretty unstoppable” as a receiver coming out of the backfield.

“I can tell you now there’s not going to be anybody in this league that can cover him one-on-one,” Stewart said. “He’s a special player.”

But McCaffrey, who is no stranger to this setting — his father Ed played 12 seasons in the NFL mostly with the Denver Broncos and won three Super Bowls — seems at home on the football field and is taking the attention in stride.

He’s looked plenty comfortable despite missing almost all of OTAs and minicamp due to an NFL Collective Bargaining Agreement rule preventing college players from participating in those practices until their school has completed its final exams. Stanford finished later than most schools.

McCaffrey already has shown a good grasp of the playbook and displayed what Stewart called a “deadly” first step.

While running a route over the middle McCaffrey put one foot in the ground, then shifted in the other direction in one fluid motion, creating immediate separation to break free for a reception. Kuechly fell for the move, stumbled briefly and then frantically raced to try to close the gap.

Cornerback James Bradberry said he let out an “ooh ahh” when he watched it on tape.

“He got me,” Kuechly acknowledged with a wide smile.

He’s gotten others, too.

The next day in practice McCaffrey headed outside in the flat on a route, then put his foot down and quickly broke up the field leaving outside linebacker Shaq Thompson grasping at air. He caught a pass 5 yards ahead of Thompson.

Added Kuechly: “He’s got shake. … He’s very precise with his movements. He is in an out of breaks quick.”

Panthers coach Ron Rivera said McCaffrey’s first move is to set up a defender and then “where he goes from there, it’s up to him.”

It’s a move that McCaffrey said came naturally to him while playing with his three brothers in a small backyard growing up in the Denver area. There was only a little patch of grass there, making things more difficult to get around his siblings before being tackled.

“I had to find different ways to make my older brother miss,” McCaffrey said.

“A lot of that quickness and setting people up and being able to jab one way and go the other way and explode off that first step — that’s where I did a lot of that stuff,” McCaffrey said.

Several players have approached Rivera during training camp to tell him they’re excited about what McCaffrey brings to the table.

“Guys come up and tell you, ‘This guy can be special, coach,’” Rivera said. “We’re seeing it, and hopefully you continue to see it.”

Stewart said McCaffrey prepares like an NFL veteran, and that includes a long stretching routine as well as a strict eating and workout regimen. He said the rookie’s focus never seems to waver.

“His approach to the game, the mental part of the craft is a 10,” Stewart said.