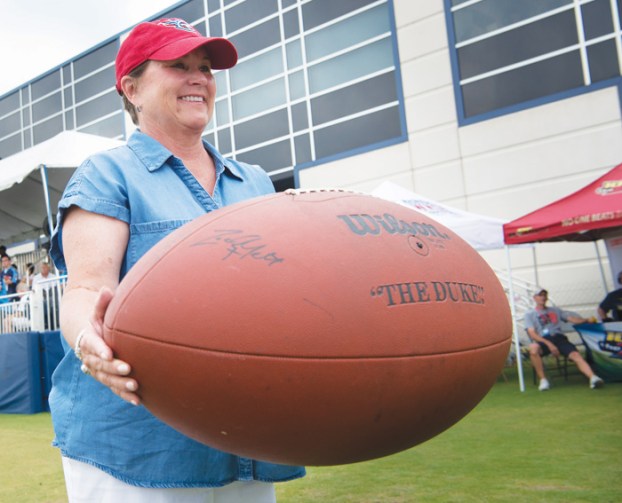 Tennessee Titans NFL football team owner Amy Adams Strunk holds a fan's giant football at the teams training camp in Nashville, Tuesday, Aug. 1, 2017. Amy Adams Strunk says all her moves since taking over as controlling owner of the NFL franchise her late father started have been designed too turn the Tennessee Titans back into winners. She also is much more comfortable as the face of ownership, taking photos with fans and talking with reporters Tuesday. (George Walker IV/The Tennessean via AP)

Amy Adams Strunk, who took over the NFL franchise her father founded in 1960, spent time Tuesday signing autographs and posing for photos. Becoming comfortable as the face of Tennessee ownership took some time for a woman who calls herself a country girl at heart. Fans were demanding to know more about her before trusting the Titans with their hard-earned cash.

“It was daunting in the beginning,” Strunk said. “There was a lot to do, a lot to fix. We had to get the team going in the right direction again, so I laid low for a while. I guess you could say I’m out now.”

Bud Adams died in October 2013 at the age of 90 , leaving the Titans to his family. Tommy Smith, married to Strunk’s sister Susie, was named Titans’ president and chief executive officer later that same month. But Smith fired coach Mike Munchak after a 7-9 season in 2013 and hired Ken Whisenhunt, who went 2-14 in his first year on the job in 2014.

Smith retired as team president in March 2015, and after growing up watching her father conduct football business at the breakfast table, Strunk took over as controlling owner and as co-chair of the board of directors with her sister. She also owns a farm and oil and gas company in Texas.

“I didn’t see myself ever in this position,” Strunk said. “I just had my opinions, kept them to myself as a smart daughter does at times. I don’t want to say you learn by osmosis. That’s silly. But being around this your entire life, this just wasn’t like a new thing to me.”

Strunk watched as the Titans drafted Marcus Mariota at No. 2 overall only to stumble to a 1-6 start. After the Titans gave up seven sacks in Houston where this franchise spent so many decades, Strunk fired Whisenhunt on Nov. 3 and made tight ends coach Mike Mularkey interim coach.

When the season ended, Strunk interviewed Mularkey along with three other candidates. She then decided to keep Mularkey two days after hiring Tennessee native Jon Robinson as a first-time general manager. Her decision to keep Mularkey was not a popular choice as coach considering his 18-39 coaching record.

“I’m sure my dad wishes there were times he did or didn’t do what he did,” Strunk said. “But you learn from that. That’s why it just didn’t make sense to pull the trigger. Mike seemed the choice. I liked what he said, and I knew Jon was going to get those pieces we needed.”

Strunk didn’t stop there. She agreed with renovating the team’s headquarters with a new locker room finished for training camp a year ago, and the Titans followed by expanding the building itself this offseason for bigger weight and training rooms.

The NFL fined the Titans in September 2016 for their ownership structure . Strunk says hopefully that’s been put to rest with the Titans going in the right direction.

Linebacker Derrick Morgan, the longest-tenured position player on the roster, said Strunk has been very hands-on — introducing herself to players and investing in both the team’s headquarters and roster. That has helped spark a turnaround for the Titans, who went from having the NFL’s worst record (5-27 combined in 2014 and 2015) to 9-7 last season.

“Look up where we were a year ago and just where we are now, it’s night and day,” Morgan said. “We’re nowhere near where we need to be. We still have a lot to accomplish, and guys are still hungry.

That’s exactly what Strunk is expecting.

“The sooner we can get there,” she said, “the better.”