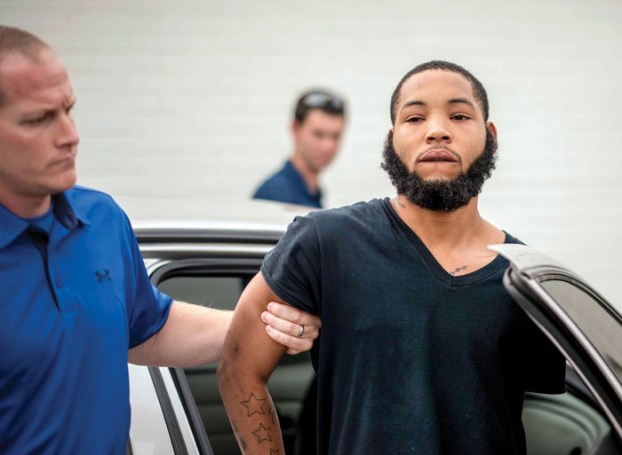 Cook’s arrest came after a brief chase that started at 642 Williams St., according to a news release. Duren turned himself in at the Salisbury Police Department after learning of a warrant for his arrest.

Cook and Duren said they are innocent as police officers escorted them to jail on Tuesday.

Duren was booked into jail first and said he lost two of his “brothers” on Saturday. He said his bond was set at $75,000 and asked family members to bail him out.

Cook said he wasn’t involved in the Saturday shootings and did not answer further questions. He is in jail under no bond.

Both men face charges that stem from the Saturday shooting in the 100 block of West Fisher Street. Da’Quan Robertson, 23, and Anthony Eugene Gill, 22, were shot and killed. Two other people were injured.

The shootings occurred at about 2 a.m. Saturday. Salisbury police officers and Rowan County sheriff’s deputies responded to a 911 call about numerous shots being fired, police said.

The motives and circumstances of the shootings have not been fully revealed, but police said an argument preceded the murders.

Stokes said detectives obtained warrants on Monday for the arrests of Cook and Duren.

The latest charges add to a lengthy criminal record for both men.

In 2014, Cook was charged in connection with a Rockwell home invasion that landed him on the Rowan County Sheriff’s Office most-wanted list. Charges stemming from that incident include assault with a deadly weapon with intent to kill, cruelty to animals, first-degree burglary and robbery with a dangerous weapon.

Officers arrested Cook in connection with the home invasion in September 2015. He was in jail for less than a month. Those charges are still pending, according to court records.

Duren’s record includes charges of possession of marijuana, assault, resisting a public officer and traffic citations, according to court records.

More suspects could be named and more charges could be filed in connection with Saturday’s murders, Stokes said.

The arrests of Cook and Duren came Tuesday afternoon, just hours after police held a news conference to identify the suspects in the weekend shooting. During the news conference, Stokes also addressed ongoing gun violence in Salisbury.

“I could certainly sit here and say this is a wake-up call, but we should have had a wake-up call a long time ago, particularly with the 7-year-old that was killed last year,” he said, referring to the death of A’yanna Allen in December. “People in our community need to work toward resolving some of these issues that are leading to this gang activity and firearms violence that we are experiencing.”

He said Salisbury cannot “arrest our way or imprison our way out of a problem like this.”

Stokes said police officers are still investigating the killing of Shawn Spry, who was found dead with a gunshot wound on Link Avenue on Monday. He said that shooting is not connected to Saturday’s double murder.

Anyone with information in either case should call the Salisbury Police Department at 704-638-5333 or CrimeStoppers at 866-639-5345. Tips may be submitted online at tips.salisburyrowancrimestoppers.org/.

By Shavonne Walker shavonne.walker@salisburypost.com SALISBURY — Although Shon Barnes has been with the Salisbury Police Department as deputy chief about... read more