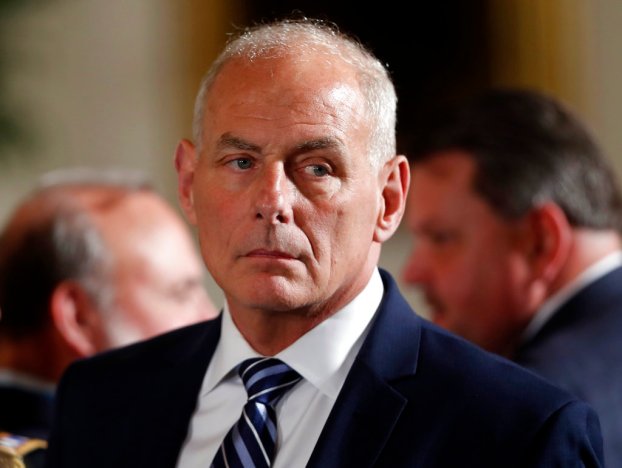 White House Chief of Staff John Kelly appears at event where President Donald Trump was to bestow the Medal of Honor to retired Army medic James McCloughan during a ceremony in the East Room of the White House in Washington, Monday, July 31, 2017.(AP Photo/Pablo Martinez Monsivais)

Ed Rogers is a contributor to the PostPartisan blog, a political consultant and a veteran of the Ronald Reagan and George H.W. Bush White Houses and several national campaigns. He is the chairman of the lobbying and communications firm BGR Group, which he founded with former Mississippi governor Haley Barbour in 1991.

Bear with me, but I am one of those Republicans who have always thought that something would happen or a threshold would be crossed and Donald Trump would pivot to become a better leader. Starting when he won the New Hampshire primary through at least a dozen other points, I thought Trump would see the value of doing things, large and small, differently. I hoped he would behave more rationally.

So, after witnessing President Donald Trump’s first six months in office and the debacle that was last week, what do I think now?

I still hold some hope that things could change. Maybe there is something about John Kelly’s gravitas that will compel Trump to behave as a president should.

The anti-Trumpers say nothing about how this president can change, but just hear me out.

Perhaps the appointment of the former four-star Marine Corps general as the White House chief of staff is Trump’s cry for help.

Perhaps, at some level, Trump knows the problem with this White House is himself, and since he can’t control himself, maybe a guy like Kelly can. Letting Kelly get rid of Anthony Scaramucci was an acknowledgment by the president that the hiring of Scaramucci was a mistake that needed to be remedied immediately. There are few examples of Trump ever admitting error, so, with Scaramucci’s near-immediate ouster, I see a glimmer of hope that maybe the president realizes he needs to be protected from himself and, in his mind, only someone with Kelly’s stature is worthy of such responsibility.

Perhaps naming Kelly as chief of staff shows more self-awareness on the part of Trump than many ever thought possible.

Anyway, some have suggested that Kelly just doesn’t fit the precise mold of a White House chief of staff given the job’s immense political responsibilities. But I think that criticism misses the point. What Trump needs is not a more subtle, ambidextrous hand to artfully navigate the political waters of Washington, what he needs is someone who can bring some semblance of basic order to this careening, imploding presidency.

Time and again, Kelly has proved himself capable of managing complex organizations at the highest levels of government — from serving as commander of United States Southern Command during the Obama years to leading the Department of Homeland Security under Trump.

His task at the White House is urgent. And hey, so far, so good. In almost 24 hours since Kelly was sworn in, there haven’t been any disasters, the president hasn’t tweeted anything crazy and Scaramucci is out. So, by Trump’s standards, they are on a roll.

And now, a word about the latest twist in the Trump-Russia story that greeted Kelly this morning.

The president’s political enemies and the usual media critics will pounce on The Post’s article, breathlessly declaring that Trump, himself, is responsible for some of the initially false statements about the infamous June meeting between Donald Trump Jr., Jared Kushner, Russian lawyer Natalia Veselnitskaya and others. They will say this piece is further proof of the scandal’s depth and potency.

The Post’s article is problematic for the president, but nothing about it suggests there was any collusion between the Trump campaign and Russia. This is just another example of the White House mismanaging and overreacting to the non-scandal. But, we are reminded of the dangerous political and legal environment in which this White House is operating — now under the direction of Kelly.

As I have written before, the frenzy surrounding talks of collusion has created a scandal without a crime. But given the special counsel’s intense investigation of every possible accusation, the media’s desperation to move the story and congressional committees issuing subpoenas, this is the perfect environment for an otherwise innocent person to wander into a crime.

The easiest way to come close to a crime would be to lie about any matter associated with the subject of the underlying investigation. And that appears to be exactly what happened. The lies in this instance don’t appear to be criminal since there is no law against lying to the public or the media, but this latest revelation puts another falsehood into play that some in Trump’s universe will think has to be defended. And that is what could turn the non-scandal into a fatal cancer.

Thankfully, Kelly has a reputation for being able to bring order to difficult situations.

Regarding all matters associated with the Russia collusion story, the White House should be quiet. They should rely on precise lawyering and full compliance. If they leave it alone, the collusion story and all the attendant investigations will run their course, no one will serve any time and this faux-scandal won’t become Trump’s Watergate.

Ed Rogers is a political consultant and a veteran of the Ronald Reagan and George H.W. Bush White Houses and several national campaigns.

Letter: Speakers for Aug. 6 event will be here as guests

It is not surprising that some people have expressed resistance to the events scheduled on the Aug. 6 anniversary of... read more