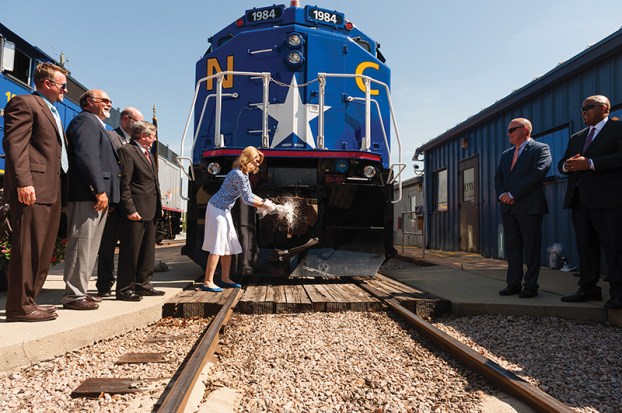 RALEIGH — North Carolina first lady Kristin Cooper joined state and local officials Tuesday to christen the No. 1984 City of Kannapolis commuter locomotive for use in the daily Piedmont passenger service.

The christening was held at the N.C. Department of Transportation’s locomotive maintenance facility in Raleigh.

The locomotive named for Kannapolis was built in 1990 for Toronto’s GoTransit system. As part of DOT’s Piedmont Improvement Program funded through the federal American Recovery and Reinvestment Act, the locomotive was rebuilt mechanically, upgraded electrically and had car body repairs.

All rebuild work was completed at the Norfolk Southern Juanita shops in Altoona, Pennsylvania.  The cost of purchasing and rebuilding the locomotive was $2.15 million, far less than the $6 million to $7 million cost of a comparable new passenger locomotive.

“We are pleased to christen one of our newly rebuilt locomotives in honor of the town of (Kannapolis) and its long association with rail service in North Carolina,” said DOT Secretary Jim Trogdon. “Rail improvements like this are essential to providing a comprehensive transportation system to move people safely and efficiently.”

Kannapolis Mayor Darrell Hinnant said trains played an important role in the development of the city.

“It is a pleasure to have this locomotive named after Kannapolis and to honor the accomplishments that have been achieved by our residents since we became an incorporated city in 1984,” Hinnant said.

DOT names its locomotives for cities along the Charlotte-to-Raleigh passenger rail corridor. Each locomotive’s number corresponds to the incorporation or charter date of the city after which it is named.

“City of Kannapolis” is painted in the DOT Piedmont paint scheme, which incorporates the colors and symbols of the state flag.

Through the Piedmont Improvement Program, DOT is investing more than $500 million in rail improvements between Raleigh and Charlotte. The program also paid for construction of a canopy at the Kannapolis train station to protect passengers from bad weather.

The station served more than 18,000 passengers in 2016 and also provides a space for community functions.