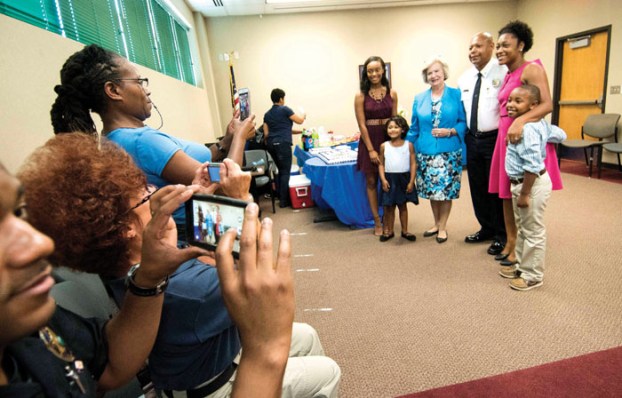 Major Shon Barnes was sworn in as the deputy chief of the Salisbury Police Department in a brief ceremony at the Shuler Law Enforcement Center on Monday afternoon. Deputy Chief Barnes poses for a group photo with his family and Mayor Karen Alexander. Jon C. Lakey/Salisbury Post

SALISBURY — Although Shon Barnes has been with the Salisbury Police Department as deputy chief about two and a half months, he was joined Monday by his family, colleagues, city officials and residents as he was officially sworn in to office.

Barnes, who was hired to direct the department’s community-oriented policing initiative and neighborhood problem-solving, began with the department May 15.

Barnes’ wife, Stephanie Barnes, and their children — Ashlee, 21; Aeiden, 8; and Addison, 6 — as well as his brother, Asheville police Officer Torian Boone, joined him at the ceremony.

Barnes said his pedigree is not what might be expected of a police officer but what is in his background is “someone who was raised by great parents who trusted in my abilities and taught me the service above everything else is the true measure of a man.”

He thanked his colleagues.

“Our goal is to reduce crime and improve citizen satisfaction with police services. That’s what policing is all about. There’s been a lot of talk recently about community policing,” he said.

He thanked Police Chief Jerry Stokes for giving him this opportunity.

Stokes said he is as excited as a coach who had signed a star player in hiring Barnes.

“I was really impressed with your abilities from the first time I met you, and I’ve been even more impressed since you’ve been here for these weeks that you’ve been with us,” Stokes said.

Stephanie Barnes said she’s excited for the knowledge that her husband can bring to the Salisbury Police Department.

“We’re just so proud of him. We are happy to be a part of the Salisbury police family,” she said.

Barnes’ daughter Ashlee said she too is proud of her father.

Sue McHugh, who attended the ceremony, said she is excited to have Barnes at the Police Department.

Sgt. Corey Brooks said Barnes has knowledge that he’s able to pass along to officers.

“He’s a great asset to this department,” Brooks said.

“We know he will continue to help this police department become a better department,” Lingle said.

Master Police Officer Chris Schenk said he is happy to have Barnes join the department.

SALISBURY — Kaye Brown Hirst recalled going to breakfast one morning at Trinity Oaks Health and Rehab, where her mom had lived for... read more