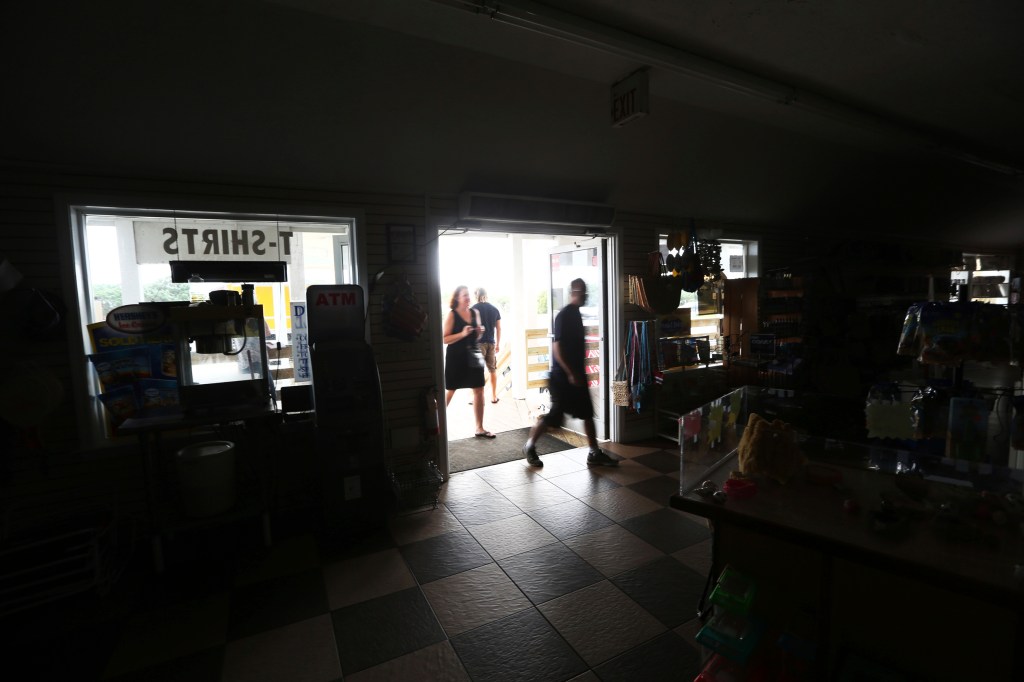 Customers enter the darkened Island Convenience Store in Rodanthe on Hatteras Island, N.C., on Friday, July 28, 2017. An estimated 10,000 tourists face a noon deadline Friday for evacuating the island on North Carolina's Outer Banks after a construction company caused a power outage, leaving people searching for a place to eat, stay cool or to resume interrupted vacations. (Steve Earley /The Virginian-Pilot via AP)

SALISBURY — Local law firm Wallace and Graham on Monday night said it has filed a lawsuit on behalf of people and businesses affected by an ongoing power outage on the Outer Banks.

The company drove a steel casing into an underground transmission cable while working on the Bonner Bridge, according to news reports, interrupting power to Ocracoke and Hatteras islands.

The lawsuit alleges that PCL claimed it could save $60 million and work on an accelerated schedule to win a contract to replace the Bonner Bridge. It says that power lines were cut during construction work on the bridge, which crosses the Oregon Inlet from Bodie Island to Hatteras Island.

As a result of the cut cable, Hatteras and Ocracoke islands lost power and utility companies have used generators to provide power to the islands. The generators were not enough to provide sustained power to all of both islands, resulting in rolling blackouts. In a news release, Wallace and Graham said “tens of thousands” of residents and tourists have been forced to evacuate the islands since Friday.

Wallace and Graham, located on North Main Street in Salisbury, said it is bringing the lawsuit on behalf of plaintiffs who include Briggs McEwan, who runs a pizza and home rental business in Rodanthe, and Tami Lynette Gray, who says her charter boat business has suffered losses.

“For people in the Hatteras and Ocracoke areas, this outage is causing significant harm,” said attorney Mona Lisa Wallace of Wallace and Graham. “We have moved quickly to seek to make our clients’ voices heard in this ongoing crisis and obtain judicial relief.”

Dennis Rose, an attorney assisting in the case, said the power outage could not have happened at a worse time — the height of the summer tourist season. Rose, whose firm is located in Kill Devil Hills, said his firm has received calls from residents and business owners who have been damaged in a variety of ways.