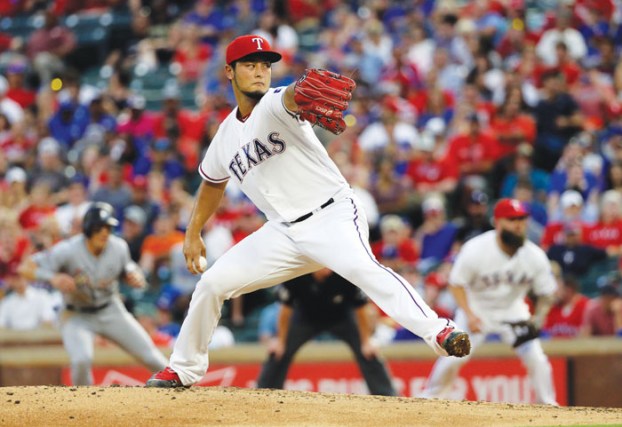 AP FILE PHOTOS Texas Rangers’ Yu Darvish was traded to the Los Angeles Dodgers just before the 4 p.m. trade deadline on Monday. Almost as last minute, Oakland’s Sonny Gray was traded to the New York Yankees. The trades spiced up what had been a fairly pedestrian stretch of deals.

Yu Darvish and Sonny Gray headed a parade of prized arms on the move Monday, leaving little doubt on trade deadline day: Top teams made a big pitch for the playoffs.

All-Star Brandon Kintzler, Addison Reed and Justin Wilson were among the many relievers swapped before the cutoff. There were 14 deals involving major leaguers — all six division leaders got someone new.

The Yankees bolstered their rotation by getting Gray from Oakland for three minor leaguers. That swap came a day after the AL East leaders acquired starter Jaime Garcia from Minnesota.

The Los Angeles Dodgers, owners of the best record in the majors and the top payroll, gave up three minor leaguers for Darvish. The Texas ace will join three-time Cy Young Award winner Clayton Kershaw, currently on the disabled list, as the Dodgers try to reach the World Series for the first time since their 1988 title.

“We’re not going to be lining up our playoff rotation quite yet,” general manager Farhan Zaidi said.

“We just didn’t line up at this time,” Padres GM A.J. Preller said, adding there was “no rush” to make a move right now.

Teams had until 4 p.m. EDT to make trades without waivers. For the rest of the season, players can be dealt only if every other club passes on a chance to claim them.

A year after the champion Chicago Cubs and Cleveland used deep bullpens to reach the World Series, several teams boosted their relief corps. As did the Cubs and Indians.

Chicago got Wilson, a valuable lefty, along with backup catcher Alex Avila from Detroit. Avila was traded away by his dad, Tigers general manager Al Avila.

“Obviously you think, well, he’s your son so you probably feel even worse. Not really. Nobody likes to go through trades,” the Detroit GM said.

“Actually, the person that’s going to be really worse off, it’s not so much my wife, it’s my mom — Alex’s grandmother. She’s the one that might be the most angry,” he said.

Joe Smith, who relieved for Cleveland from 2009-13, was sent from Toronto to the Indians.

“A lot of fans of Smitty in this organization, so getting him back will be a lot of fun,” Cleveland manager Terry Francona said.

The contending Boston Red Sox added Reed, who had been serving as the New York Mets’ closer. Reed is 1-2 with a 2.57 ERA and 19 saves in 21 chances, and he joins a bullpen that includes dominant closer Craig Kimbrel.

Like a lot of other executives, Red Sox president of baseball operations Dave Dombrowski was on the prowl for pitching.

Dombrowski reached into the left pocket of his suit jacket and pulled out an 8×11-inch piece of paper. He then counted — by ones — “20 right-handed relievers that were on our list at one time or another, and a lot of lefties, too.”