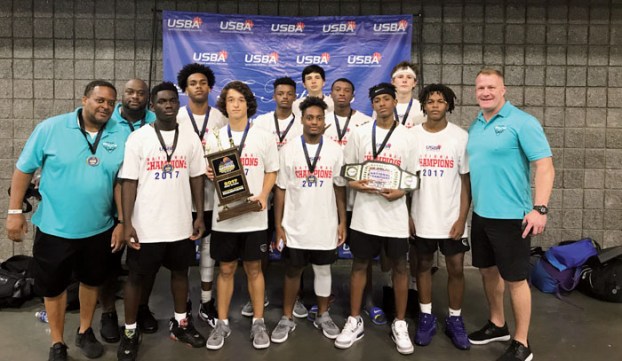 Staff report
Team F.L.Y. was the 10th-grade champion in the 12th annual United States Basketball Association Boys National Championship held at the Charlotte Convention Center on July 18-22.
The team is made up of players from Salisbury, North Rowan, East Rowan, Carson, West Davidson and Northwest Cabarrus high schools.
Team F.L.Y. (For Love of Youth) went 3-o in pool play, winning 67-56 against the Rock Hill Ballers; 61-41 against the Carolina Basketball Club Shockers (Charlotte), and 66-44 over the Gate City Grizzlies (Greensboro).
In bracket play, Team F.L.Y. won in the quarterfinals, 58-35, against Team Heat of Jackson, N.C. Team F.L.Y. won in the semifinals against the G2G Elite team from Pennsylvania.
In the championship game, Team F.L.Y. won, 54-43, against the Hardwood Warriors from Summerville, S.C., to finish 6-0.
The tournament, played on 21 courts, attracted about 500 teams in all and crowned champions from second grade up to 11th/12th grade.
LeBron James’ sons (4th-grade and 6th-grade) participated in the tournament and attracted large crowds.

Lucille O’Neal, mother of Shaquille O’Neal, and the Miami Heat’s Justise Winslow were speakers for the tournament.