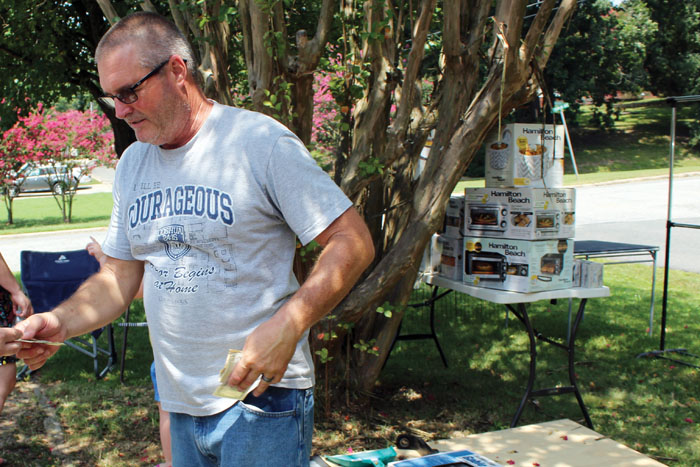 Andie Foley / Salisbury Post - Dave Mathis braves the July heat for a two-day yard sale. The sale features products that he sells at festivals and knife and gun shows across the county.

SPENCER – On a hot July weekend, Dave Mathis can be found in his front yard surrounded by potential deals for passersby. From decorative tin signs to small appliances, from fidget spinners to large generators, the man has a little bit of everything.

Yet, this is no standard Saturday yard sale. It’s a biannual purge of the surplus from Mathis’ full-time business, now three years in the making. Together with his wife, Mathis travels the country to peddle his wares at festivals, flea markets and gun and knife shows.

“If it’s a good deal and I know that I can make money off of it, then I buy it,” he said. His passions, however, are knives and gun accessories: items that do best at shows rather than places people go seeking bottom dollar prices.

At gun and knife shows, Mathis and his wife sell concealed carry handbags, body armor, pocket knives, targets and other gun-related paraphernalia. Business has been great, though it’s slowed down following the election.

“Right now, everyone thinks they’re safe because the election went Republican,” said Mathis. “It’ll pick back up in about two years. Maybe a little less.”

Mathis’ interest in knives and guns goes beyond his business endeavors. He is an outspoken proponent of a citizen’s right and need to carry protection, provided they are safe and educated.

“I’m not an advocate for someone just buying a gun. With a gun, you have to have knowledge. You need to go learn how to shoot. Take a safety class. It’s all good information; there’s good information at concealed carry class.” His stance is influenced by a lifelong exposure to weaponry through hunting and fishing endeavors. He was raised between the Ocala National Forest and the Florida Panhandle and got his first gun at age 5: a 22 rifle.

The knives Mathis sells reflect this more outdoorsman-type of usage. He sells Old Timer and Old Henry pocket knives, those practical pieces of equipment found on many a Southern gentleman’s person.

These treasures are not to be found during his twice-a-year yard sales – and neither are his favorite things to offer his customers at these national shows.

His favorite thing? Offering patrons and potential-patrons a copy of the Bible, free-of-charge.

“Everywhere we go we put Bibles on the table. I really would rather give away a Bible than sell something,” Mathis said candidly.  He feels this effort has been a large part of what has gotten his business off the ground.

“That’s just a small thing, giving out Bibles, but the reward? I know that’s why we’re successful.”