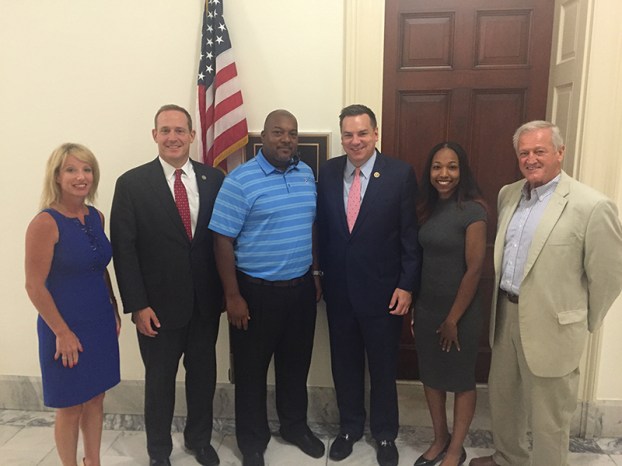 One local group made stops in Virginia and the U.S. Capitol last week as part of a trip focused on an annual underage drinking program.

The group, which included representatives from the Rowan-Kannapolis Alcoholic Beverage Control Board and organizers of the annual Game Plan for Life Program, had meetings in Richmond, Virginia and Alexandria, Virginia before talking with a pair of North Carolina congressmen. Members of the group included: Terry Osborne, Nanette Dillon, Chris Sifford and Courtney Powell.

Osborne, the general manager of the local ABC board, said the trip included meetings with the Virginia ABC Commission and the National Alcohol Beverage Control Association. Finally, the group of four met with Reps. Ted Budd, R-13, and Richard Hudson, R-8, to talk about the Game Plan for Life program and other issues, Osborne said.

Between Richmond and the U.S. Capitol, the local group stopped at the National Alcohol Beverage Control Association in Alexandria, Virginia.

The meeting with Hudson and Budd was the final stop in the trio of meetings, Osborne said.

In a statement, Budd said he was encouraged to hear that the Rowan Kannapolis ABC Board’s efforts to curb underage drinking have been so successful that other states are adopting similar models.

Hudson said the local ABC board does “fantastic work” and he plans to work with them and other to confront issues such as underage drinking and the opioid epidemic.

By Josh Bergeron josh.bergeron@salisburypost.com If statements by North Carolina congressmen are any indication, an effort to repeal the Affordable Care Act... read more