Little League softball: Rowan back in the World Series 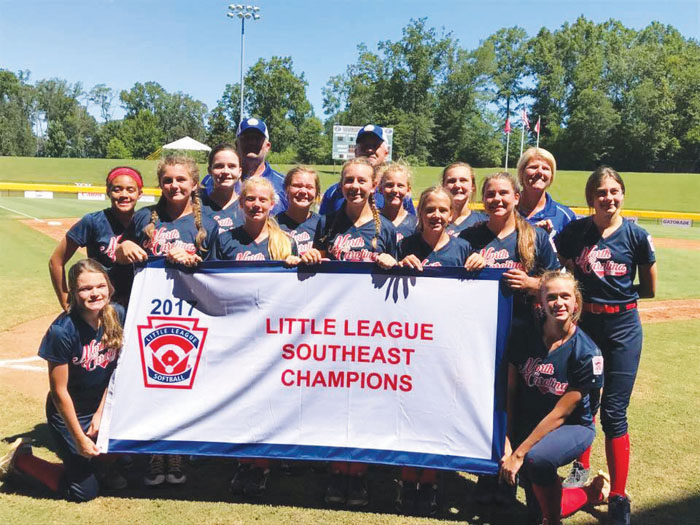 Facebook photo The Rowan Little League Softball 12U team won the Southeast Regional on Monday, July 31, 2017, in Warner Robins, Ga., by defeating Tennessee, 8-0. The team will return to the LLSB World Series in Portland, Ore. The Rowan won the World Series in 2015 and was runner-up in 2016.

WARNER ROBINS, Ga. — Rowan Little League’s  12U softball team is heading to the World Series in Portland, Oregon, for the third year in a row.

“Three in a row … that’s crazy,” said manager Johnny Meadows. “The girls made it look easy today, but it’s not easy doing this. They played hard, and I’m very excited for them.”

Rowan won emphatically in Tuesday morning’s championship game, rolling to an 8-0 victory against Clarksville, Tenn., to finish the Southeast Regional with a 3-0 record. Rowan had roughed up the Tennessee champs, 16-2, earlier in the seven-team tournament.

“We were a whole different team today than we were on Sunday against West Virginia (an ugly 10-8 win in extra innings),” Meadows said. “I didn’t know what to expect, but we played some great defense.”

Rowan was playing its third game of the tournament, while Tennessee was playing its sixth, so Rowan had a rest advantage as well as a pitching advantage. Tennessee’s top pitcher was out of innings before the final.

Rowan led, 5-0, after three innings, and pitchers Kendall Robinson and Karsen Simpson never let Tennessee get back in the game. Robinson struck out three and allowed three hits in four innings. Simpson struck out two and threw two hitless innings. Meadows also praised the work behind the plate of catcher Brooke Kennerly.

“She didn’t let anyone run on us,” Meadows said. “Her defense was so important.”

Sproul had eight hits in Rowan’s three tournament games. Piper went 6-for-7 in the tournament.

After a ride of six hours, Rowan’s team arrived back at Salisbury Community Park late Tuesday night with a police escort.

Meadows said the team will head to Oregon on Sunday or Monday. Rowan’s first game in Portland is scheduled for Wednesday at 11 p.m. EST, against Cedar Valley, Utah. Meadows has quite a bit of experience. He coached the Rowan Junior girls (ages 13-14) who played in the World Series last summer in Kirkland, Washington.

Rowan will play four pool games. The top four teams from each pool will advance to a seeded, eight-team, single-elimination tournament, although teams still will play consolation games after they’re eliminated from the championship hunt. Meadows expects all seven of the winners bracket games to be televised.