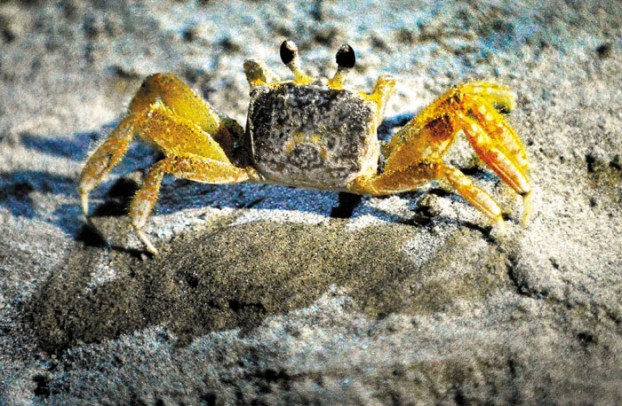 Crabbing on the beach on Kiawah Island is fun to search for the Ghost Crabs (Sand Crabs) as they go to the ocean for food. Putting a flashlight on a crab makes him visible. Two flashlights can give you a front light and a backlight that casts the shadow in front of the crab. photo by Wayne HInshaw, for the Salisbury Post

Here’s another one. Quick — turn the flashlight over here. Boy, he is fast.

Wow! He is a big one. Look at his eyes. They stick up out of his head.”

Such is the conversation of a group of flashlight-bearing people moving up and down a beach in South Carolina in the pitch dark of night.

I must have discovered a new sport, if you are ever on the hard-packed sand of the beaches on Kiawah Island, S.C. Well, truly, it is not a sport at all, but a fun-filled pastime on the beach at night. All you need is a very good, bright flashlight and very quick reflexes. I don’t know if it will work on all beaches, but the Kiawah Island beaches are known for this simple activity of ghost crab crabbing.

Once darkness has consumed the beach, beachgoers young and old make their way in the dark,  avoiding tripping over sand castles built earlier in the day or stepping into the remains of a hole where someone buried a willing friend in the damp sand.

You are are about to chase the elusive ghost crabs (some know them as sand crabs) as they come up out of their burrows and head to the ocean nightly for their evening meal. The little crustaceans have five legs on each side of their shell with a pincher on one of the legs on each side. Their legs appear white, maybe transparent and ghost-like, with a tint of yellow. Their two eyes protrude up out of their head and turn and follow the beam from the flashlight. Their little beady black eyes can see 360 degrees, but they are not so good at looking straight up. They blend in perfectly with the gray color of the wet sand. The beam of light from the flashlight does seem, for a moment, to paralyze them into sitting still.

During the day, they dig burrows the size of golf balls three or four feet deep into the sand and wait for darkness to come out for a meal. They don’t go into the ocean but to the water’s edge in search of other crabs, clams, lizards and insects to settle their hunger. Actually, they cannot swim, but they need the shallow water to feed and replenish their oxygen supply.

The fun of this sport is not to catch, hurt, or eat the little crabs, but just get to see them. As far as I know, they are not edible, but a lot of fun to watch. They can come out by the hundreds or only a few at a time.

In the winter, they bury into their burrows and hibernate up to 6 weeks at a time.

They can hold their breath up to 6 weeks in their burrows. Don’t go looking for ghost crabs in the winter because the wait will be long.