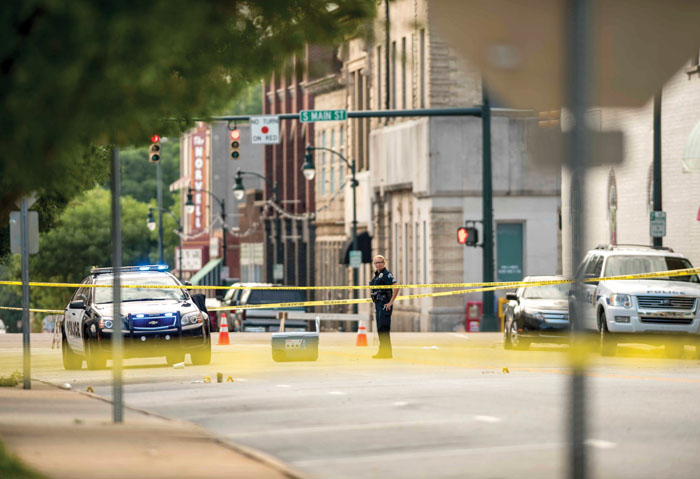 JON C. LAKEY / SALISBURY POST Two men are dead following a shooting in the 100 block of West Fisher Street early Saturday morning. Police crime scene tape cordoned off most of the block with evidence markers scattered about the parking lot next to the historic downtown mural.

SALISBURY — Two people were killed and two others were hospitalized after an early Saturday morning shooting in the 100 block of West Fisher Street. Police are still trying to determine if a fifth person who arrived at a Lexington hospital was involved as well.

The incident occurred at 2:13 a.m. and began with a 911 call about numerous shots being fired. Members of the Salisbury Police Department and Rowan County Sheriff’s Department arrived in the area and began a preliminary investigation, authorities said.

Police said an argument preceded the early morning shooting. The motive and circumstances surrounding the events are still being investigated. No arrest has been made at this time.

A large number of shell casings and other pieces of evidence littered the entire 100 block of West Fisher Street in the Wells Fargo parking lot where the downtown mural is located.

Police said Gill was taken to Novant Health Rowan Medical Center with gunshot wounds. He later died as a result of his injuries at the hospital. Robertson was found dead at the scene in front of First United Methodist Church, located at the corner of South Church and West Fisher streets.

Davis was taken to Novant Health Rowan Medical Center with gunshot wounds. He was treated and released. Family confirmed Davis was shot in the arm.

Police say McCullers was taken to Novant Health Rowan Medical Center with gunshot wounds and was subsequently taken to an area trauma hospital.

Sharon Matthews’ grandson, Da’Quan Robertson, was one of those killed.

Matthews’ son, Reggie Burke, was murdered a year ago Saturday. Burke, 30, was found dead at Zion Hills Apartment complex. His murder remains unsolved. Her son Rico Baker was killed April 2008. He was shot and killed in front of a home on East Cemetery Street. His murder also remains unsolved.

“It’s not right, us parents got to suffer,” Matthews said crying.

She said she just looked at her son Reggie Burke’s obituary the other day and now her grandson was killed. She received a phone call telling her of his death.

She feels as though her family is being targeted. Matthews said the shootings of her sons and grandson could be connected.

The last time Matthews spoke with her grandson was about a month ago when he was on his way to Go Burrito to get something to eat. She said he often frequented the downtown restaurant.

Matthews said if nothing is investigated by law enforcement then the killings will continue.

Downtown streets, including parts of West Fisher and South Church, remained blocked for much of the day as the investigation continued. Crime scene tape could be seen throughout the area of the shooting and officers were still on the scene.

During the same time period that the victims arrived at Novant, a fifth person went to Lexington Memorial Hospital with gunshot wounds. Investigators are still trying to determine if this person is connected to the Salisbury shooting.

The SBI was contacted to assist the police department with the investigation and spent much of the day on the scene with investigators.

According to Go Burrito’s Facebook page, they informed customers of the shooting, saying the employees and few lingering customers at the restaurant were kept safe as they locked the doors and barricaded themselves upstairs until the police came.

“Needless to say, people were scared and rattled. We’re thankful for the actions of people and the police that kept everyone safe after the incident,” the Facebook post said.

“Senseless violence like this is a plague to communities both small and large. Please pray for the victims, for justice, and for the police to be able to keep the community safe,” the Facebook post also said.

The restaurant stayed closed all day Saturday, but expects to open today.

Police officials said the investigation is still in the early stages of development and information is limited.