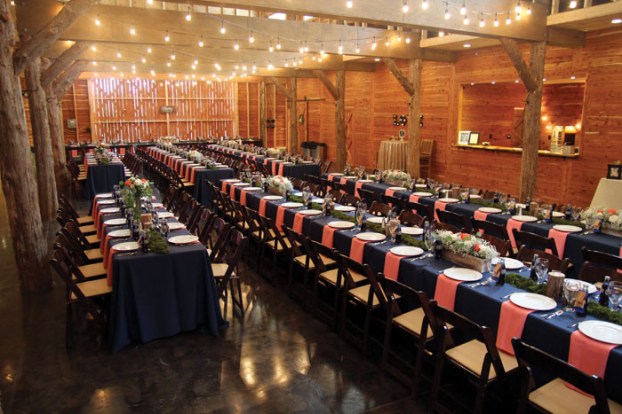 Examples of what the inside of the barn could look like, when decorated for a reception. Lisa said their venue is one of the few that lets wedding parties bring in their own decorations, vendors and photographers. (Ben Samelak)

A wedding on the hill: The Barn at Cedar Hill became an instant success among brides

SALISBURY — When you first approach The Barn at Cedar Hill from Clark Road, all that you can see are cedar trees.

Tall and thin, the well-manicured trees line the narrow country road that leads to the barn, which sits just behind a large gravel parking lot.

The barn is made entirely of cedar, as are many of the features that occupy other parts of the venue. That’s an effect that Lisa Hill; her father, Terry Hill; and her husband, Ben Samelak, worked hard to create.

“We started in probably February of ’16,” said Terry. “We started dragging the logs out, in the mud, and getting everything ready and leveling off the pad.”

“(Lisa) was up there putting them 2-by-12s up there on top. Her and the 65-year-old carpenter was up there. And I had the skid steer lifting things up,” Terry said.

Lisa said that it would have taken them much longer to build if they didn’t have a deadline to adhere to — the day of her wedding, Oct. 15. Lisa had decided early on that she wanted to have her wedding reception in the barn.

“I think when you have a deadline like that, it makes you get things done. (My dad’s) wanted a barn for a while, but I guess my wedding kind of gave us that little push that we needed to get it done,” Lisa said.

But, even so, the Hill family wasn’t sure what would happen to the barn after Lisa and Ben’s wedding. Terry had originally wanted a barn so that he would have a place to store his antiques and his tractors, and thought that maybe it would become his.

But then, during Lisa and Ben’s honeymoon, the Facebook messages started coming in.

“The wedding was in October and then a lot of people came and they took pictures of everything and they were posting it online,” Lisa said. “And then, while I was away on my honeymoon … all of these friends on Facebook just started messaging me and they were getting married and they were like, ‘Are you going to rent out the barn? Are you going to have other weddings there?’ And we were just like, ‘Well, it’s an idea. Why not?’”

From there, Lisa said things “just kind of went crazy.”

“When we first had a couple of people contact about the weddings, I was like, ‘Well, OK, what, like, two weddings next year?’ You know? And then, ‘If we want to grow it from this, it’ll be slow, right? It’ll be steady.’ And then that just didn’t happen,” Lisa said. “It took off way faster than I ever thought.”

So far, The Barn has had nine weddings — including Lisa and Ben’s — and it is scheduled to have 30 more before 2017 ends. Lisa said that it is already booked for 50 weddings in 2018.

“I did not anticipate this,” she said, laughing.

Lisa thinks one of the reasons the venue has taken off so quickly is because there aren’t many places like it in the area.

“I went to go talk to more of my friends that got married and you know, basically, if they could list one thing about their venue that they didn’t like, it was that they were kind of forced into using certain people. Or forced into not being able to bring in their decorations and make their wedding their own,” Lisa said. “And then they would send me their contracts from these other places and I would see these crazy rules.”

Some of those rules included only being able to use venue-recommended caterers, photographers and bands.

“So that’s one of the things we decided going in — we don’t want to force people to do certain things. We want them to be able to come in and make their wedding their own,” Lisa said.

Lisa is working on a list of vendors that she has worked with and would recommend to other brides, but she said that people are not required to use them.

She said that, since she and Ben got married late last year, the pitfalls of planning are still fresh in their minds.

“And be overwhelmed and not even know where to start,” Ben added.

The venue — located at 450 Clark Road in Salisbury — is still growing. As of now, it includes a ceremony space next to a nearby pond, the barn and a cedar forest entrance, where many couples have taken their wedding photos.

If you are interested in having your wedding at The Barn at Cedar Hill, you can go to their website — thebarnatcedarhill.com.

AARP to feature ice cream and Meals on Wheels

The Salisbury-Rowan Chapter 4314 of AARP will hold its annual Ice Cream Social on Thursday, Aug. 3, at Rufty-Holmes Senior... read more