‘A labor of love:’ School system feeds thousands over summer 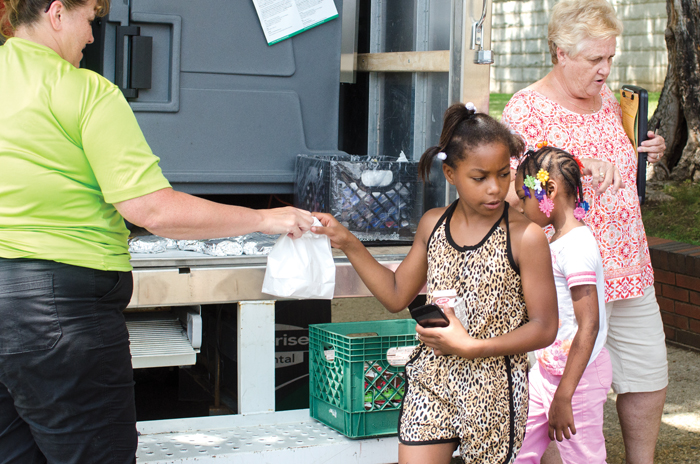 KRISTI CRAVEN/ SALISBURY POST Shakyia Leach, 9, gets her food from the food truck at a Summer Feeding Program in Spencer on July 12, 2017.

SPENCER — It’s still early when a young girl rides up Third Street on a child’s motorized scooter, whipping around the corner onto Yadkin Avenue in a lavender blur. She swings the scooter up onto the sidewalk, sending swirls of pink and purple petals from the crape myrtle trees flying behind her as she putters past a row of houses.

“It’s almost time for the truck!” she yells.

A group of children come spilling out of a house on the corner, running across the street to the yard of Central United Methodist Church.

A few moments later, the truck appears — a non-descript white moving van with a magnetized Rowan-Salisbury Schools sticker slapped on the side.

Linda Miller, site supervisor, herds the group into a line while food service workers open the back of the truck and pull out plastic crates of food. The white lunch bags are snatched up while Miller keeps a headcount with a clipboard.

“We may have 25 one day and ten the next,” volunteer Marsha Wood said. “You just never know.”

Rowan-Salisbury’s Summer Feeding Program falls under the umbrella of the USDA’s Summer Food Service program, and is federally funded. In Rowan County, the program has experienced exponential growth in recent years, and feeds thousands each summer — providing 135,999 meals to local children during the summer of 2016.

But organizers say they haven’t even scratched the surface.

“I don’t think we’ve even reached, I don’t think, half,” Lisa Altmann, Rowan-Salisbury Schools director of food and nutrition said.

An estimated 62 percent of Rowan-Salisbury students receive free or reduced lunch, and 11 area schools serve universal lunch and breakfast to all students.

This year, the program partnered with Food For Thought, sending bags of food home with students over the weekend. According to the non-profit organization, more than 8,900 county children in 2013 were food insecure — meaning they didn’t have a reliable next meal.

The summer pilot program has had mixed success, food and nutrition assistant Meredith Honeycutt said. But it’s taught them how to streamline it next year.

“Sometimes you learn from failures,” she said.

In June, trucks rolled out to deliver food to 130 sites — though not all of those sites are available to all children. Some are at summer camps, which may run only a week or a few days and just serve registered campers. But many are open to any child, aged 3 to 18, at breakfast and lunch. The USDA requires that each site have shelter, supervision and that all food be eaten onsite.

In just 12 days of operation in June, food service workers handed out 19,621 lunches. However, that number is down from last year, Honeycutt said. The program provided 22,694 meals in a 14-day period in June 2016.

It’s hard not to get discouraged — but Honeycutt, and others, are searching for the good.

“We need to declare small victories,” she said.

Numbers are down, in part, because funding was cut from several organizations that usually provide summer camp vouchers to kids in need, Honeycutt said. But she also pointed out the program’s recent spike in growth.

“We grew so fast in two years. … So if we can maintain and sustain, I’ll be happy with that,” she said.

And the numbers are always growing. Staff keep a constant eye out for areas that may have been overlooked.

“It hasn’t curbed our enthusiasm,” Altmann said, of the drop.

Central United Methodist Church is the only open site to bear a Spencer address. Miller said she sees the program as something that helps parents stretch summer budgets further.

“It really gets expensive for parents during the summer, I think, to make sure their kids are getting three meals a day,” she said.

But she, and others who volunteer to oversee the rowdy group of kids, hope to feed them more than just food.

“We’d love to try to feed their hearts, but first you’ve got to establish those relationships with them,” she said.

It’s something that’s not easy when most of the volunteers are the same age as the children’s parents or grandparents. Miller said that in the past the church tried to offer programming, as well, but it fell through.

But it hasn’t diminished the volunteers’ desire to reach out. As lunch begins in the basement fellowship hall — with bowed heads and a sung blessing — Miller and other volunteers ask students how their day was, help them open packages of food or sit and talk with them while they eat.

“It’s nice for them to get some exposure to — to love with no strings attached,” Central United Methodist pastor McKenzie Sefa said.

Children at Summer Feeding Program sites come from all backgrounds — from those who depend on the trucks for their daily bread to those who drop by for a chance to get out of the house.

For many students, the meal sites are a chance to catch up with friends during the summer and to hang out with people their own age. At Central United Methodist, groups of children come more than an hour early, greeting each other with bright smiles before springing into a game.

Some simply sit on the low brick wall in patches of shade cast from a maple tree, talking and trying to escape the July heat.

Melissa Secreast, a teacher at North Rowan Middle, brings her son with her when she volunteers at the site. He’s in second grade, but she said she’s seen him playing with seventh graders.

Though the children are of different ages and in different grades, there’s a camaraderie that blossoms as they race each other in the street, climb the church sign, twirl cartwheels down the sidewalk or take turns plucking on a guitar.

For most of the wait, there are no parents in sight — but the kids look after their own, making sure younger children get in line first, keeping them occupied in the heat or picking them up and carrying them across the street.

“Some of them I think have to grow up too fast,” volunteer Sue Schultz said, watching the kids play.

But seeing their teachers at sites also helps provide a sense of stability.

This year, Central United Methodist reached out to local schools and asked teachers to volunteer. The call attracted people like Secreast, who has been a teacher at North Rowan Middle for 20 years.

“Most of them are my kids,” she said, looking down the sidewalk towards the vibrant group of children. “I know all of them.”

But more than that, she knows their families. When one of the students gets too rambunctious on a Friday afternoon, Secreast calls him over and asks him to sit next to her. The two chat about school and the boy’s family.

“I know your granddad,” she tells him. “…He was one my favorite students. …I know your whole family. You come from good people.”

Central United Methodist also formed a partnership with the Town of Spencer, requesting that a Spencer police officer be present whenever possible to help keep peace with the often mischievous group, offer a sense of security and to provide positive role models.

Officers aren’t able to make it every day, but when they do, they, too, reach out. One Thursday, Officer D.W. Ward moves to sit with a young girl who’s off by herself. He asks her about her life, and her interests. As the fellowship room clears, he promises to talk to her the next day.

Ward said he hadn’t heard of anything like the Summer Feeding Program until he started working in Spencer. He had no idea the number of local children going hungry.

“It’s heartbreaking to see that, and know there’s nothing you can do about it,” he said.

But teachers aren’t the only familiar faces students see. The food service workers who ride the trucks are well known from school lunch lines. For many, working the Summer Feeding Program is the highlight of the year.

“It’s so hot, and it’s busy, but they’re just smiling. They can’t wait to get out there,” Altmann said of the staff.

And while interactions at each site are brief, they’re no less meaningful. In previous interviews, Altmann has called the Summer Feeding Program a “bridge” between the end of one school year and the beginning of the next.

“It’s a break for them,” Altmann said of the students.”… They don’t want to leave on Fridays. Because some of them, literally, we are their — we’re their lifeline, so to speak. We’re the ones that they tell their stories to. We’re the ones they talk about their dreams with.”

As the summer — and the years — wear on, the work doesn’t get any easier. But Altman, Honeycutt and volunteers like Miller said they won’t give up until they’ve reached every child.

“It’s a labor of love, but it’s a good labor,” Honeycutt said.