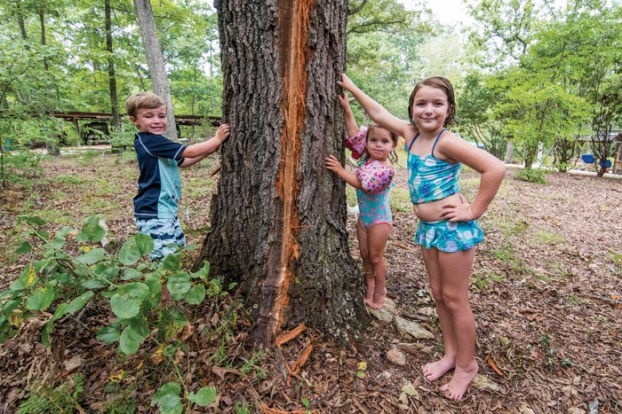 The grandkids take a break from the swimming pool to gather around the tree. Carson Marino and his sisters Paige and Anna Lynne. Randall Smith came home from a funeral recently to discover that large oak tree near his in-ground pool at his home has been struck by lightning. Wednesday in Gold Hill. Jon C. Lakey/Salisbury Post

GOLD HILL — Randall Smith knows he has a life most people would envy.

His property off Old Beatty Ford Road includes a 100-acre tree farm with a good stand of pines. He has some chickens for eggs, bees for honey and a trusty dog named Millie to scare off any prowlers. He’s thinking seriously about getting back into making molasses again.

Smith and his wife, Ann, have lived in this corner of the world for 43 years, long enough to enjoy their in-ground pool and cherish seven grandchildren, with another on the way.

“Well, here’s the tree,” Smith says, his eyes running toward the top of a red oak next to the pool building.

The tree is about 75 feet high and looks as though it has been unzipped of its bark from top to bottom on two sides. Lightning did this – what Smith considers a “superbolt,” unlike anything he has ever seen.

The bark the lightning removed was splintered and scattered everywhere, like onions on an omelet at the Waffle House. Shards of bark were thrown some 50 yards from the tree.

“I suspect that tree is split inside,” Smith says. “It was like dynamite going off.”

The red oak is a dead oak.

One of the splintered projectiles from the tree put a hole in the side of the pool building. The lightning also fried a computer, printer and pool radio that Smith kept in this shed. After the storm and lightning strike, the pool was littered with leaves, limbs and bark.

The pool umbrellas also had blown into the water.

The storm blew through about 4 p.m. July 15. Randall and Ann weren’t home. They were attending a funeral in China Grove.

Driving toward the service that day, Randall saw the storm brewing in the northwest.

“Boy, I hope that cloud goes down to us,” Randall told Ann. He thought their property could stand some rain.

In hindsight, Randall says now, “I didn’t want it that bad.”

Randall’s brother, who lives in the town of Faith, watched the storm cloud’s progress that same afternoon.

“He said it went straight toward Gold Hill,” Randall says.

His daughter and her family heard the lightning hit the red oak from their house, which is a considerable distance across the road.

“They knew it was a really bad one,” Randall says, describing how the storm actually took down a few other trees.

Anna Lynne Marino — Randall’s 7-year-old granddaughter — says her father ran over to the Smiths’ house when the storm was over and took photographs.

From her place across the road, the little girl said, it sounded “like a bomb.”

Smith guesses the red oak was about 80 years old. It stood next to the horseshoe pit, and many of the players used to lean against it before their turns to throw. The oak also provided the best shade for that corner of the pool and patio.

In the near future, Smith will have to call in a professional tree service to have it removed.

Smith knows there wasn’t anything he could have done, even if he had been home.

“Lightning’s going to go where it wants to go,” he says.

But he wonders just how powerful that particular lightning strike was.

“I wish there was some way to measure lightning bolts,” he says.

The story of Superbolt has many silver linings: No one hurt or electrocuted. It didn’t hit the house.

“And at least it didn’t get my chicks,” Smith adds.

ROCKWELL — One by one, all 19 South Rowan High School football players and a few coaches climbed a... read more