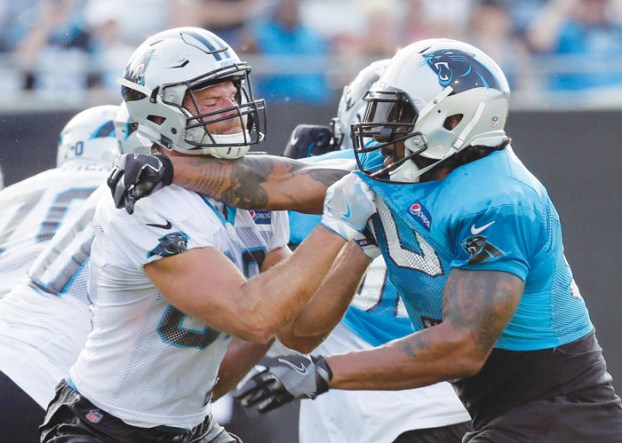 SPARTANBURG, S.C. (AP) — The Carolina Panthers aren’t afraid to say it — they’re going for it all this season.

Whether it’s the window of opportunity closing because of an aging core players or the belief they’re only a few guys away from returning to the Super Bowl for the second time in three seasons, there’s an undeniable sense at Wofford College that the Panthers have pushed all their chips into the pot for 2017.

“We are not bringing people in here to build for two of three years down the line,” Panthers coach Ron Rivera said after Friday’s practice. “I mean we want to win and we want to win now. Our intention is to get back to where we have been in the past and get this team to be that team that is was — and can be.”

The Panthers went 17-2 in 2015 losing to the Denver Broncos in the Super Bowl, but fell on hard times last year finishing 6-10.

This approach to free agency is a big change from the team’s usual blueprint of building through the draft. And the players notice.

The Panthers have several core veterans who are getting on in years, and this may be their best chance to win the franchise’s first Vince Lombardi Trophy in its 23-year existence.

Tight end Greg Olsen, center Ryan Kalil and defensive end Charles Johnson are all 30-something and entering their 11th seasons in the league.

Running back Jonathan Stewart is no spring chicken at age 30 and entering year No. 10, while safety Kurt Coleman is 29 and will be playing his eighth season.

Even seventh-year quarterback Cam Newton has reached middle age by NFL standards, having turned 28 in May.

It’s not that the Panthers have abandoned their practice of building through the draft. They drafted running back Christian McCaffrey in the first round and wide receiver Curtis Samuel and offensive tackle Taylor Moton in the second round to add youthful speed.

But with so many veterans around, it’s not hard to see what’s happening.

“When you bring in veteran guys like we have … it shows that we want to win right now,” wide receiver Brenton Bersin said.

Panthers linebacker Luke Kuechly likes the blend of veterans and rookies, particularly in the secondary. The secondary was young last season, with two starting rookie cornerbacks following the departure of All-Pro cornerback Josh Norman to the Redskins.

“What helps you as a team is if you have good young guys and then you have some older guys that can help with leadership and understanding of football and be a calming presence,” Kuechly said. “We have guys that have been around and done it. Once you mix those guys with guys with the younger guys it’s a good mix.”

The moves announced Friday night came before the Jets hold their first practice of training camp on Saturday.

Gragg spent his first four NFL seasons with Buffalo after being a seventh-round draft pick out of Arkansas in 2013. He has 24 catches for 251 yards and two touchdowns in his career, but missed last season after tearing a knee ligament in a preseason game.

“Been a long 10 1/2 months but im back,” Gragg wrote on Twitter . “Glad to be a part of the NY Jets. #ImBack #thebestisyettocome #nyjets.”

Cannon was claimed off waivers by the Jets in May, less than two weeks after San Francisco signed him as an undrafted free agent out of Baylor.