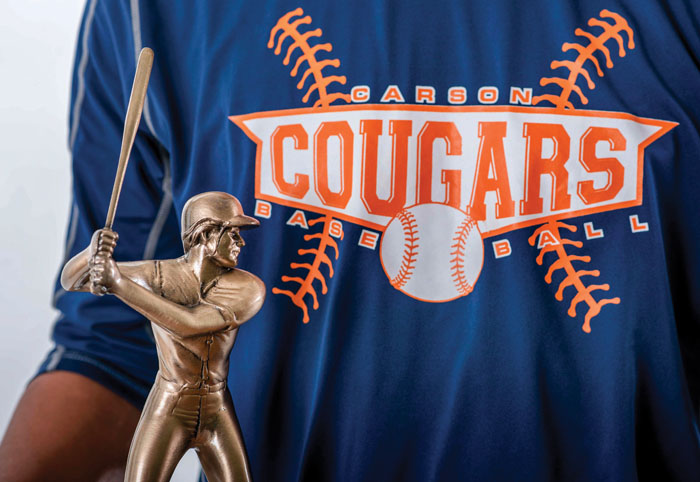 SALISBURY — Forty years of wear and tear have wiggled the foundation and loosened the batter’s bat on the original Mark Norris Memorial Award, but Clai Martin wouldn’t take a thousand dollars for a  trophy that cost the Salisbury High Booster Club $45 back in 1978.

That’s because Martin was friends with the guy the award honors.

Martin has one of those basement/sports rooms. It’s basically a shrine to the athletic accomplishments of his children — Seth, who made enough 3-pointers for West Rowan to score 853 points, and Taylor, who starred for the Falcons in softball, basketball and volleyball and was 2016 Rowan County Female Athlete of the Year.

“In the middle of all those framed articles and pictures of our kids is the Mark Norris Memorial Award,” Martin said. “I’ve always tried to display it properly. It’s always meant the world to me because I played with Mark, and I know how good a player he was and how great a guy he was. The kids that win that award now, I wish they’d had a chance to know him, too.”

Martin is friends with Kevin Ennis, the North Rowan athlete who won the 1990 award. They’re separated by a dozen years in age, but that award connects them. In a lot of their conversations, the Mark Norris Memorial Award comes up.

Mark Norris was a strong athlete at Salisbury High, a guard on the football team and a star catcher on the baseball team. He captained the 1975 and 1976 baseball Hornets.

“Catcher was the perfect position for Mark, both physically and because he was a team leader,” Martin said.

Mark’s parents were involved in Hornet athletics, with his father, Ned, serving as the president of the booster club. His mother, Ilene, put in a lot of hours on the football program committee.

Mark graduated in the spring of 1976 and went on to UNC Pembroke.

He was a sophomore in 1977, home for Christmas break, when he killed in a single-vehicle accident on Majolica Road. A passenger, Mark, was thrown from the car when it overturned. The accident occurred on the night of Dec. 21. Before noon on Dec. 22, Mark died at Winston-Salem’s Baptist Hospital.

Five months after that tragedy, Martin, who batted .345 in 1978 for the SHS Hornets, was surprised at the spring awards banquet by the presentation of the first Mark Norris Memorial Award.

“The award came about through a boosters club project, with the idea being to give an award to the Salisbury baseball team’s MVP and honor Mark’s memory,” explained Eric Norris, Mark’s older brother. “I was asked to make that first presentation at the awards banquet to Clai and to say a few words.”

And so it went.  Eric Norris presented awards to Salisbury MVPs Mike Lippard in 1979 and Coe Brier in 1980. Brier, the greatest slugger in county history, still holds the home run and RBI records for Rowan County American Legion.

“When Coe was inducted into the Salisbury-Rowan Hall of Fame (in 2012), he invited me to be there,” Eric Norris said. “He talked to me about getting that award in high school, how much it meant to him then, and how much it still means to him.”

Change was in the air for Mark Norris Memorial Award by the early 1980s. It really is a splendid trophy, and it was overshadowing smaller plaques and trophies behind handed out to MVPs in other sports. No one had really thought about that angle.

“I remember getting a phone call from Mike Carter (Salisbury’s baseball coach in 1980-81),” Eric Norris said. “He said he had bad news for me, that the school administration didn’t want the award to be given out at the banquet anymore. At first, I couldn’t believe what I was hearing. He explained that the award was too nice. I told him OK, that I’d back out.”

Salisbury’s Tim Kirk, an ace pitcher headed to UNC, was the first two-time winner of the Mark Norris Memorial Award in 1981-82. He also was the last to officially win the award as Salisbury’s team MVP.

“It was actually Tim Kirk’s parents who made the suggestion to me about making it a county-wide award,” Eric said. “The Salisbury Post always announced a county player of the year, so I went to the Post sports department, to Horace Billings and to Ed Dupree, and asked if they’d consider giving the award to the Post’s player of the year. They were all for it.”

For the next two seasons, Salisbury players still won, with Jerry Page taking honors in 1983 and Kris Huffman in 1984.

It wasn’t until 1985 when a player who didn’t go to Salisbury High won. The winner that year was East Rowan catcher Chris Cauble.

The initial booster club fundraising for the award was exhausted decades ago and the cost of trophies has roughly tripled over the last four decades, but the Norris family has continued to donate an annual award. When there’s been a tie in the voting, as was the case in 1995, 2007 and 2010, the Norrises haven’t batted an eye. They’ve just supplied two.

There have been  heartbreaking and heartwarming Mark Norris Memorial Award stories as the years passed.

“I got a call one day from the Trophy House — they made the trophies for us — back when it was still in Granite Quarry,” Eric Norris said. “They’d gotten a call from a man who had inquired about getting his Mark Norris Memorial Award replaced and they were checking with me to see if it that was OK.  The original trophy he had won had been lost in a fire.  I had no objection to him replacing the trophy. I was honored that it meant so much to him that he wanted to.”

In a perfect world, North Rowan’s fine pitcher Patrick Snider might have competed for the Mark Norris Memorial Award in 2010, but instead the courageous teen was fighting a losing struggle with cancer.

He got a visit from Sandy Moore, the North hurler who was co-winner of the Mark Norris Memorial Award in 1995. Moore quietly presented his award to Snider, and there’s probably no gesture that could’ve meant more to either of them.

Rowan County is a relatively small place and baseball is a game handed down from one generation to the next, so it’s not a huge surprise that there are annual connections among presenters and winners.

There were more ties than usual this year when Carson pitcher/shortstop Owen White took home the 40th award.

Cauble, that first non-Salisbury winner, is White’s coach at Carson.

Eric Norris tracks the accomplishments of all the award winners. Once someone wins, he’s an unofficial member of Eric’s extended family.

Salisbury High winners have been rare in recent years, but all are special to Eric Norris. Riley Myers and Brian Bauk came close, but the last Mark Norris Memorial Award from Salisbury was Philip Tonseth in 2011. Tonseth graduated from the United States Military Academy at West Point.

“Something I’ve been extremely proud of over the years is that these awards have gone to fine people and not just to good baseball players,” Eric said.

The Trophy House is located on Faith Road in Salisbury now. Eric said they apologized to him not along ago about the soaring cost of materials for the trophies. A Mark Norris Memorial Award now costs $135.

“All things considered, the cost has been very small indeed,” Eric said. “After 40 years, my brother is remembered in a very positive way because of this award.”

Since there have been three years of co-winners and a pair of two-time winners (Kirk and North Rowan pitcher Daniel Moore),  41 individuals have won a Mark Norris Memorial Award. It’s safe to say more awards are on display than are stored in cardboard boxes in attics.

“My award is right in the middle of everything in our sports room,” Martin said. “When people walk into that room, I want them to see that award first.”
Mark Norris Memorial Award winners