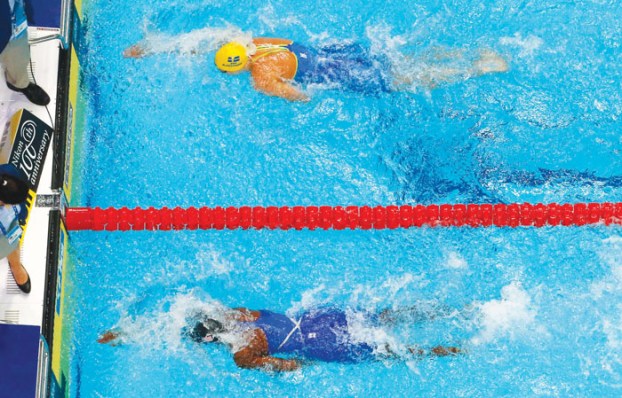 BUDAPEST, Hungary (AP) — Simone Manuel felt the pressure of being an Olympic champion. It sure didn’t bother her at the world championships.

The 20-year-old Texan backed up her historic victory in Rio de Janeiro by rallying to beat Sweden’s world-record holder Sarah Sjostrom in the 100-meter freestyle Friday.

“It’s kind of been ingrained in me,” said Manuel, who edged Sjostrom on the final stroke. “I want to win, and I’ve been training to do that this whole time.”

Last summer, Manuel became the first African-American woman to win an individual swimming gold at the Olympics when she tied Canada’s Penny Oleksiak for the top spot on the podium.

“It was a lot of pressure knowing that I was the Olympic gold medalist in that event,” Manuel said. “I had a lot of nerves.”

Another U.S. Olympic champion came up short in his bid for an individual gold in Budapest.

Ryan Murphy settled for silver in the 200 backstroke behind Russia’s Evgeny Rylov, while another American, Jacob Pebley, took the bronze.

Murphy swept the backstroke events last summer in Rio , but he hasn’t been quite as sharp in Budapest. He took bronze in the 100 and simply couldn’t catch Rylov in the longer event, the Russian finishing in 1 minute, 53.61 second to beat Murphy by a comfortable 0.60 seconds.

It was a huge night for the Russians, who captured two other individual golds and grabbed a silver in the men’s 4×200 free relay behind Britain.

Yulia Efimova bested American rival Lilly King in the women’s 200 breaststroke, easing a bit of the sting from two silvers in Rio and another loss to King in the 100 breast at Budapest .

Efimova pulled away on the final lap to win by more than 2 seconds over another American, Bethany Galat. China’s Shi Jinglin grabbed the bronze over a fading King, who slipped to fourth after setting a blistering pace early in the race as she always does.

But King is a 100 specialist and still struggling to master the longer race. There was no holding off Efimova, whose winning time was 2:19.64.

Unlike King, who has a frosty relationship with Efimova over blunt comments about the Russian’s past doping violations, Galat went over to give the winner a hug.

“I don’t know her personally, but she won a gold medal and I think her time was incredible,” Galat said. “She’s a heck of a swimmer, a heck of a breaststroker. I mean, she won, of course I’m going to congratulate her.”

Sjostrom, who set a world record in the 100 free earlier in the meet while swimming the leadoff leg of the 4×100 relay, jumped out to a quick lead and was under her own record pace when she made the flip.

Manuel was lagging in third but her wind-milling stroke got stronger and stronger on the return lap. Hugging the lane rope to gain some drafting help, she steadily closed the gap and lunged for the wall just ahead of Sjostrom.

“I just wanted to stick to my race plan, and that’s kind of having a comfortable fast first 50,” Manuel said. “My back half has been pretty good this meet on the relays and my prelim and semifinal swims, so I’d a lot of confidence in really coming back that second 50.”

Manuel touched in 52.27 — edging the Swedish star by just four-hundredths of a second.

Sjostrom was kicking herself for a rookie mistake, going out too fast on the opening lap.

She had nothing left for the return.

“It’s so stupid,” Sjostrom said. “The refrigerator on my back was too heavy for me. If it happens when there’s 10 meters left, you can still do it. But with 25 it’s too much. I thought I was un-human the first 50, but I need to understand.”

Pernille Blume of Denmark picked up the bronze.

Manuel claimed her third gold of this meet, having also competed on a pair of winning relay teams, and she’s still got the 50 free.

“It felt pretty good,” she said. “I think I still have room for improvement, which is really exciting.”

James Guy powered the British men to victory in the 4×200 free relay with a brilliant anchor leg, closing out a winning time of 7:01.70. He was joined on the top of the medal stand by Stephen Milne, Nicholas Grainger and Duncan Scott.

Russia was next at 7:02.68, while the United States faded to bronze.