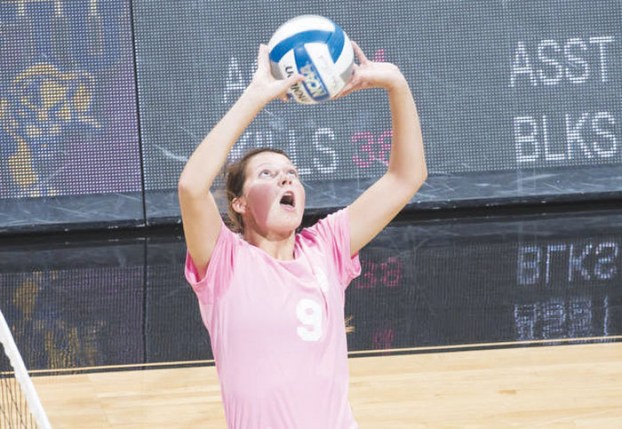 Charlotte Sports Information photo ... Michaela White, shown during a 2014 volleyball match for Charlotte, has transferred to UNC Wilmington. Finally healthy again, White is eager to play this fall for the Seahawks. Jon C. Lakey/Salisbury Post …
Michaela White (22) shows the form she used at Carson High School, when she was the four-time Rowan County Player of the Year. White’s first collegiate stop was at UNC Charlotte, but after injuries, has transferred to UNC Wilmington. This photo is from 2011, in a match against South Rowan.

WILMINGTON – Everyone’s keeping their fingers crossed, but Michaela White is healthy and will be on the volleyball court for UNC Wilmington for the first time when the Seahawks welcome Loyola (Md.) and Appalachian State to Hanover Hall on Aug. 26.

“This is a new shot, a fresh start for me,” said White, a transfer from Charlotte who enrolled at UNC Wilmington last spring.

White’s career at Jesse Carson High was phenomenal. She was a four-time Rowan County Player of the Year.

In her junior and senior years, Carson was 69-5 and was Western Regional champ and 3A state runner-up both seasons. Carson coach Kelan Rogers, who has guided a lot of terrific players at West Davidson and Carson said White was the most talented player he’d ever coached.

That high praise from Rogers came back in the fall of 2013 as White was signing with the Charlotte 49ers, and no one argued. An agile, 6-foot, coach-on-the-floor, White not only could set, hit, pass, dig, block and serve with the best, she was a glue person who helped make the good athletes around her great ones. Those 2011-12 and 2012-13 Cougar machines were the best the county has ever produced.

White looked like a can’t-miss star when she signed with the Charlotte 49ers to stay close to home, but that signing party was the last time she was able to smile for a while. Five days after she signed her National Letter of Intent, the coaching staff that recruited her was fired.

“That was the first three coaching changes that affected me at Charlotte,” White said. “Just a lot of bad vibes, and then a lot of injuries.”
It’s easy to forget that White got off to a fine start in the college ranks. As a true freshman in 2014, she was on the court often for the 49ers. She had solid performances against Holy Cross (29 assists, eight digs, four kills), Nicholls State (29 assists, 12 digs, three assists) and Gardner-Webb (28 assists, 11 digs, four kills, three blocks). She played in 14 matches, but an injury to her right shoulder in early October essentially ended her season.

Specifically, the  injury was a tear in the labrum, the fibrous tissue that stabilizes the shoulder joint.

That was the start. Since then, White has been in hospitals and rehab more than she’s been on volleyball courts.

“After that first torn labrum, I tore it again just five months later,” White said. “I’ve had three major surgeries in the last few years, all on my right shoulder.”
White missed all of the 2015 season.

“I’d go to the games, watch my teammates playing, and it would just tear me up inside,” White said.

Prior to the 2016-17 school year, White was at the breaking point in her long love affair with volleyball.

“I was very close to just trying to move on with my life without volleyball,” White said. “There had been so much rehab, so many ups and downs, and I was feeling kind of lost.”

“They told me I was too good not to try to continue to play,” White said.

White missed all of the 2016 season at Charlotte, but the combination of rehab, rest and a return of her competitive fire had her ready to try again.

But she wanted a new beginning, a school where she wouldn’t be reminded of pain and disappointments as soon as she woke up in the morning.

White was able to obtain a release from Charlotte. After a few phone call, she had a new home. UNC Wilmington coach Amy Bambenek tried to recruit White out of high school, so she was pleased to add her to the program. White will focus on setting for the Seahawks.

“With the graduation of two senior setters we felt this was a great opportunity to bring in someone who has experience and understands the demands of being a college athlete,”  Bambenek said. “Michaela was on our radar as a high school player, so I’m thrilled to add another talented North Carolina native to our roster.”

White, whose younger brother, Owen, a Carson rising senior, is one of the state’s top baseball players, went through “spring training” with the Seahawks. She played in a few tournaments and had a chance to test her shoulder and learn the strengths and tendencies of her new teammates.

” I went through the spring and everything was good with the shoulder,” White said. “The coaches, the trainers, the strength and conditioning people, they’ve all  made the transition as easy as possible for me. They’ve all gotten on board with me helping me stay healthy.”

White majors in psychology and minors in biology. She’s a junior in terms of volleyball eligibility and plans to play two seasons for the Seahawks. She’ll be a senior in the classroom this fall. Her long-range goal is to enter a physician assistant program.

But for now, it’s just nice to be thinking about digs and sets again, and she hopes to make up for a lot of lost time, doubts and heartaches.

UNC Wilmington has two other setting options, younger girls, but if she can stay healthy, White should be a difference-maker for the Seahawks.

“Everything that I’ve been through and all the experience I have should really help me,” White said.

By Mike London mike.london@salisburypost.com As dominant as a 5-foot-9 player can possibly be at the high school and Division II... read more