‘Tom, Dick and Harry’ will bring you lots of laughs 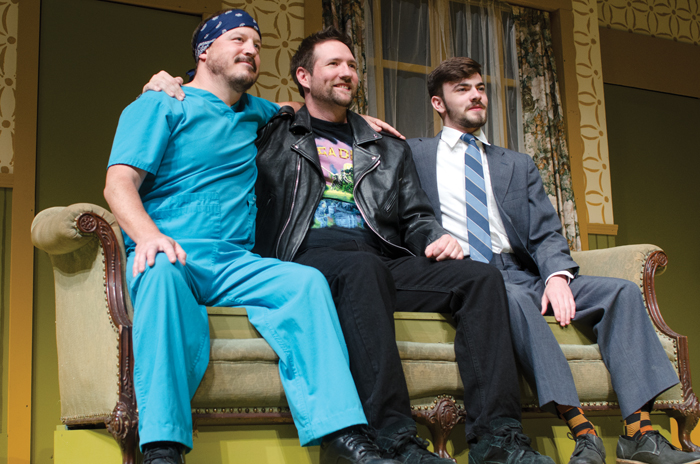 KRISTI CRAVEN/ SALISBURY POST From left, brother's Harry, Dick, and Tom played by Chris Love, Marc Trent Tucker and Patrick Moore sit on a couch during a production of Tom, Dick and Harry at the Meroney Theater on July 17, 2017.

Be prepared to laugh, groan and wince throughout Piedmont Players’ production of “Tom, Dick and Harry,” a Ray Cooney farce.

Cooney has brought us a slew of modern farces, using all the tried-and-true tricks — multiple doors, mistaken identities, random mishaps and beleaguered wives.

The men are always the fools — here, Dick and Harry. Tom is a liar of monumental talent who just digs the hole he’s fallen into deeper and deeper.

Tom Kerwood, played by young Patrick Allen Moore, is an upright, somewhat steady member of society, renting a posh house and hoping to adopt a child with wife Linda, played by Amber LaGore with a smart attitude and all the right reactions.

Moore gets extra credit for his bizarre physical tics to indicate extreme anger and frustration, and they are of his own design. Though a recent high school graduate, he plays the part as maturely as such a character can be. He’s very funny, and his comedic timing is good.

His brother Dick, played by Piedmont veteran Marc Trent Tucker, is the dude who always has some scheme afoot to make money. He lives in an upstairs flat in Tom’s house. His latest impending disaster is a van full of smuggled cigarettes and brandy.

What sets up all the tension is that Tom and Linda are expecting a visit from the very uptight Mrs. Potter, from the adoption agency. They have to be on their best behavior and have been studying all the dos and don’ts of parenthood.

Greer personifies Mrs. Potter — stern, no-nonsense and not easily fooled — with the straight face needed to make everyone else funny.

When Dick arrives with his contraband, Tom is miffed but thinks he can send him packing, until two people who don’t speak English tumble from the van.

Andreas is played hilariously by Nick Bishop, and Morgan Fuller’s lovely Katerina, his granddaughter, is amusingly animated. You won’t understand a word Andreas says, but his gleeful actions, his trumpet playing and his drinking make him irresistible. Both Bishop and Fuller communicate with a lot of gestures — more chances for hilarity — in order to explain what they want.

Harry brings an entirely disgusting new wrinkle, with his ridiculous plan to bury body parts in the garden, so when they are found the asking price for the house will plummet. He’s read about just that thing happening. Conveniently, Harry works at the hospital, sometimes in the morgue, and it’s a teaching hospital. He calmly explains how the students have to share the cadavers, with a leg here, a stomach there, and then all the bits and pieces have to be disposed of. He’s got a ready supply of body parts and a crazy idea to help them decay, and he’s ready to put the plan into action.

Chris Love is a scruffy Harry, with a great laugh and tough bits of physical comedy.

With the high degree of illegal activity going on, who do you think knocks at the door? Constable Downs, of course, with Catawba College President Brien Lewis again enjoying a comedic turn on the Piedmont stage. He may seem a bit dim at first, but he works things out to the point where Tom, Dick, Harry and several others may be headed to jail.

You can just picture what’s going to happen, can’t you? But wait, there’s more! As if Mrs. Potter, the constable and body parts were not enough, here comes the mysterious Boris, played by Eric Slipp, and he has a gun.

Arguably the funniest part of the show is Tom’s jerky, convoluted stories to explain why what the constable sees is not as it seems. Serendipity comes into play in a big way.

And then, believe or not, there’s a happy ending. What more could you want on a July night?

Director and designer Reid Leonard was assisted by veteran actor Gary Thornburg in directing the show, and his little touches show.

Some language and a few gestures may be inappropriate for children, but everyone else will find plenty to laugh at. With a 20-minute intermission, the show runs just a tad over two hours.