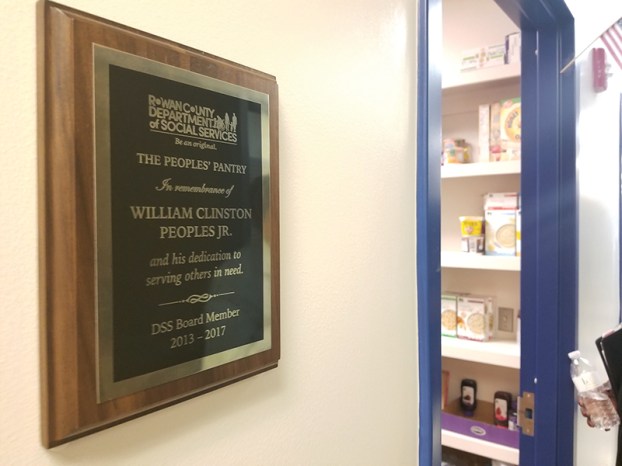 Josh Bergeron / Salisbury Post - The Rowan County Department of Social Services this week named its food pantry in honor of William Peoples who served on the board from 2013 until his death earlier this year. SALISBURY — The Rowan County Department of Social Services honored the late William Peoples this week by naming its food pantry after the former board member.

Peoples, who died in March at age 61, served on the Department of Social Services board from 2013 until his death.

Before the board’s Tuesday meeting, a group of friends, family members and acquaintances gathered for the dedication of  “The Peoples Pantry.”

“He’s always advocating for people’s needs and social justice, and we found it fitting to honor him and his work here,” said DSS Director Donna Fayko. “And we chose the food pantry because it meets the critical needs of our customers.”

The food pantry at DSS can be used by people who apply for benefits and have to wait a period of time before receiving those benefits, she said.

“We thought that’s something he would support and absolutely would be proud to have his name associated with,” Fayko said.

DeeDee Wright, a close friend of Peoples who also serves on the DSS board, said she was glad to see Peoples honored in connection with something he was passionate about.

“We found very interesting the double entendre of his name, The Peoples Pantry, because he was the people’s advocate,” Fayko said.

She said the food pantry contains mostly nonperishable items and canned food. It also has baby formula. She said DSS staff has held fundraisers to fill the food pantry. Donations from the public are also welcome.

In a speech during the dedication ceremony, Jim Sides, also a DSS board member, said Peoples tried to make the world a better place for people to live.

Sides said Peoples was an agitator, a disseminator, a cultivator, a creator, an originator, a motivator, a donator, an animator, a collaborator, a cooperator, a communicator and an administrator.

He said Peoples wasn’t a manipulator, a spectator or a procrastinator.

Karen Peoples Marlin, one of Williams’ sisters, said he would have liked that the food pantry is named after him.

Wanda Peoples, also one of his sisters, said it’s important to let residents know that resources like the DSS food pantry are available.

To donate to the food pantry or for more information, contact Amy Wagoner at 704-216-8406 or amy.wagoner@rowancountync.gov.

SALISBURY — Twenty observances of National Night Out on Tuesday will feature free music, food, children’s games and other outdoor activities, along... read more