Cam Newton: Do you ‘expect a lion not to roar?’ 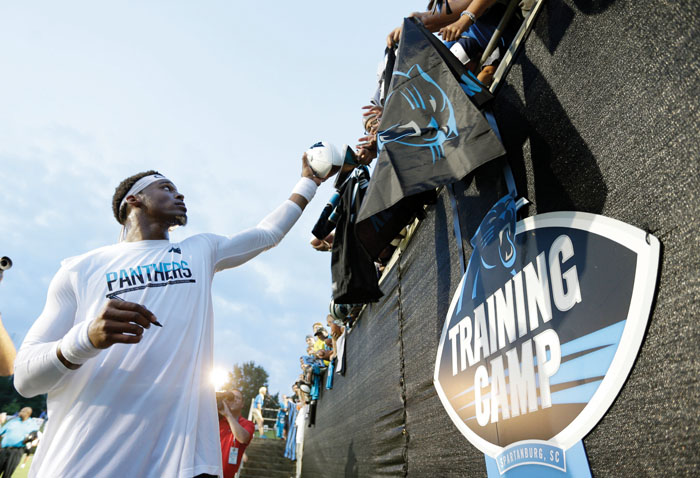 SPARTANBURG, S.C. (AP) — The Carolina Panthers have talked this offseason about limiting Cam Newton’s carries in 2017 to prevent wear and tear on his 27-year-old body.

But the NFL’s most physically imposing quarterback doesn’t seem to be completely buying into that approach.

“That’s my edge,” Newton said. “Are you really going to expect a lion not to roar?”

Newton spoke Thursday at Panthers training camp, adding that his ability to run the ball is what makes him productive.

“I couldn’t imagine talking to (Tom) Brady, or talking to Aaron (Rodgers) or talking to even Matt Ryan or (Drew) Brees and saying, ‘Are you going to stay in the pocket all day?’” Newton said. “That is where you feel comfortable. In my career, the things that have put me in an advantage most times is having that ability to run. I’m going to take what the defense gives me.”

Panthers coach Ron Rivera said back in January the Panthers needed to “evolve” as an offense and also had to find new and different ways to use Newton’s unique skill set.

He said Newton is “not as young and nimble as he used to be” and the Panthers had to be smart about how they used him moving forward following a shoulder injury.

“You can’t sit there and expect us to run 20 zone reads and then expect him to carry the ball 10 out of 20 times anymore,” Rivera said in January.

The Panthers have relied heavily upon Newton as a rusher over the years, beginning with the installation of the zone read option as a rookie. Newton has carried the ball 689 times over the past six seasons — by far the most of any quarterback in the league — and has already run for 48 career touchdowns, more than any QB in league history.

But that could be about to change.

The Panthers’ draft was all about evolving as an offense and taking some of the pressure off Newton. The team spent its first two draft picks on Christian McCaffrey and Curtis Samuel, a pair of electrifying players who bring speed and versatility. They also selected offensive tackle Taylor Moton to help protect Newton.

Newton said he’s excited about the rookie class coming in, as well as the veterans the team has added such as Matt Kalil, Captain Munnerlyn and Julius Peppers, whom he called “the biggest person I have seen in my life on a football field.”

He’s also talked about being motivated following a 6-10 season, saying it was extremely humbling.

Carolina’s down season came one year after nearly reaching the NFL pinnacle in 2015. The Panthers went 15-1 in the regular season and had the league’s No. 1 offense two years ago before losing to the Denver Broncos in the Super Bowl.

Newton expected to sustain success, which is why 2016 was such a disappointment — and so tough for the seventh-year quarterback to swallow.

“I took last year personally,” Newton said. “I took it extremely personally and I knew that something had to change and it started with myself and my impact on the locker room.”

It’s why Newton dedicated himself almost entirely to football this offseason rather than spending time filming his own Nickelodeon kids TV show. He’s rehabbed hard from offseason shoulder surgery to repair a partially torn rotator cuff and dropped more than 10 pounds to get down to 246. He started throwing in practice at Wofford College on Wednesday night and had good velocity on the ball.

“I wanted people to see this is just not another year,” Newton said. “I didn’t want to speak it, I wanted to action it. … People don’t realize that football is a 12-month sport.

He said he began working out in February and “kept the pedal down.”

“I have had this mentality ever since out last game in Tampa,” Newton said.

Inside, he said the struggles and disappointment of last year will motivate him.

“I can’t ever let that happen again,” Newton said. “Ever.”