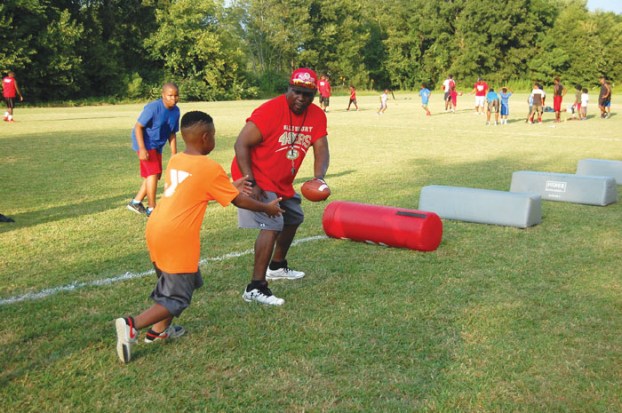 SALISBURY — When she talks about watching her son play for the Salisbury 49ers, Devora Neely grins with pride.

Neely said the Salisbury 49ers, a nonprofit youth football league that just started its eighth season, is run entirely by volunteers like her. As a team mom, Neely spends nearly two hours a day handling players’ paperwork, communicating with parents and attending practices.

Neely and her son, Jaylen, are not the only ones in their family involved with the program. Neely’s husband, Keith Neely, has been the team’s treasurer for the past two years and their daughter, Jada, is on the 49ers cheerleading team.

“Honestly, I think that what they do with these kids is amazing. I really honestly do,” said Keith Neely. “My kid has been out here for five years now, he’s been playing with this organization.”

Many of the 49ers volunteers are parents, including the coaches. One of those coaches, Brian Alford, has all three of his sons in the program.

Alford said that although he thinks he and his wife provide a good home life for their kids, he knows that not every kid on the field is in the same situation.

“ … You see why we do it. It’s the kids,” Alford said. “And it’s the purpose of getting these kids early. Even if they go home and see stuff that we hope they don’t see, (we hope) that they’ll still hear our voices in their heads at nighttime saying, ‘Hey, don’t do this, don’t do that, don’t do this.’”

Alford said that having positive role models for young men in the community has always been important. But he said it’s especially important now.

“I mean, we all know that Salisbury has a bad rap right now for the violence, and the more we do this, the more we’re hoping that with the positive role models out here, with the coaches that hopefully we can instill something in them to make them realize, ‘Hey, there is another way to do things,’” Alford said.

Brian Miller is president and head coach of the football team. He said he’s been involved with it since the program involved just a few police officers and residents working together in East Spencer.

Those teams cover kids ages 5 to 14, both for the football program and the cheerleading program.

“We try to create good young men, good student athletes in the community,” Miller said. “And, if one thing, that we know for two hours Monday, Tuesday, Thursday and Saturday, that they are over here practicing in a safe environment.”

Children can technically register until the end of September, but the teams’ first games will likely be on the first Saturday in September.

The registration fee is $75 for the season. But Devora Neely said the team holds fundraisers and accepts sponsorships in order to offset the cost, should a family not be able to afford the fee.

“We’re trying to do whatever we can to make sure that every kid can play and that money isn’t an issue,” she said. “And if anybody is interested in sponsoring a kid, we would definitely appreciate that.”

Keith and Miller said donations to the program are always appreciated.

As of now, Miller said the biggest challenge is making sure that the nearly 100 children currently signed up for the league can make it to practice.

“A lot of kids I see want to play but they don’t have transportation here. And that’s our biggest challenge. A lot of our coaches, they go and pick up the kids and you’ll see coaches coming in with seven or eight kids in a van,” said Miller.

The league’s main sponsor is the Salisbury Police Department. Salisbury Parks and Recreation allows the league to use Hall Gym to store equipment.

Editor’s note: This article is the last in a series examining the creation, operations, effects of, future of and other... read more