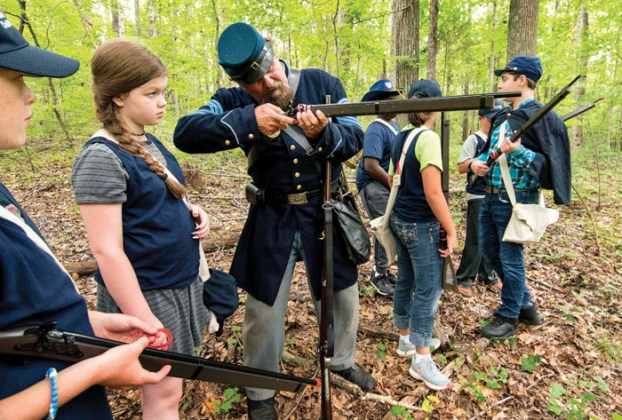 Stephen Harris shows Kara Shainn how to use her cap gun for the up coming battle. Young people took part in a week long camp hosted by the Rowan Museum to learn about about the life and times of a citizen soiider pulled into service during the American Civil War. On Wednesday the campers took part in a skirmish between the union and confederate units as they role played in the woods behind the Old Stone House, in Granite Quarry. Jon C. Lakey/Salisbury Post

These phrases, yelled by students, echoed through the woods behind the Old Stone Building in Granite Quarry on Wednesday morning.

The students yelling were participating in a mock Civil War battle organized by Rowan Museum’s Civil War Camp, and they were using the skills that they learned at camp.

“We’re gonna surprise them,” said Nisaiah Childers, referring to what his team planned to do to their opponents.

Childers was chosen to be captain of his regiment in the mock battle, and he would give orders during the fight.

The battle began with the Union team staking out a place to fight. The Confederates had to track down the Union’s location, and from there the battle began. There were lots of crouching behind trees and sneaking around, and many students ran through the woods as if their lives depended on it.

“It’s really fun to be in there giving commands and stuff,” said Childers. “I want to come back next year.”

Tricia Creel, Rowan Museum’s education coordinator, said that for this camp, the focus was on teaching perspective on the Civil War, looking at the experience of the war locally.

“We do teach the kids the order when things happen, be we teach more about the events that happened instead of making them focus on dates,” said Creel.

Creel said the Civil War camp is open to students from sixth to eighth grade, and it is an annual camp. Each day, the students learn about a different year of the war. The kids draw to find out which side of the war will be on during mock battles and also vote among fellow students to choose their leaders in battle.

Activities for the week included going to the Hall House and the Old Stone House for mock battles, learning about drills and marching, learning how to handle situations in battle, designing and making battle flags, and mapping out a battle plan.

The camp received assistance throughout the week from re-enactors of the North Carolina 28th Regiment. Members of the regiment came to educate students and tell stories from their ancestors in the Civil War. They will also be at the Rowan Museum from 10 a.m. to 4 p.m. Saturday for a program open to the public.

During the mock battle, re-enactors assisted students with their battle strategies and helped them figure out where to position themselves in the woods.

At the end of the first mock battle, both sides negotiated a truce. They decided to take up the fight once more after eating lunch.

In the yard in front of the Old Stone House, museum director Aaron Kepley prepared a meal over an open fire for students to devour. The kids ate their lunch on picnic blankets in front of the Old Stone House. Corn cakes, fatback, hardtack, corn on the cob, and stew were on the menu, and according to the students, the meal was comforting and delicious.

“This food makes me feel warm and good inside. It reminds me of home,” said student Daniel Pickett.

Local high school and college students also assisted with leadership responsibilities. Most of them were former campers who loved the program so much that they decided to come back to help when they aged out.

Creel said it has been encouraging for her to see what the students are learning about history and how they have wanted to stay involved throughout the years.

SALISBURY — The other day, I stopped in at the Rowan Museum headquarters in hopes of gathering some details on an Aug. 5... read more