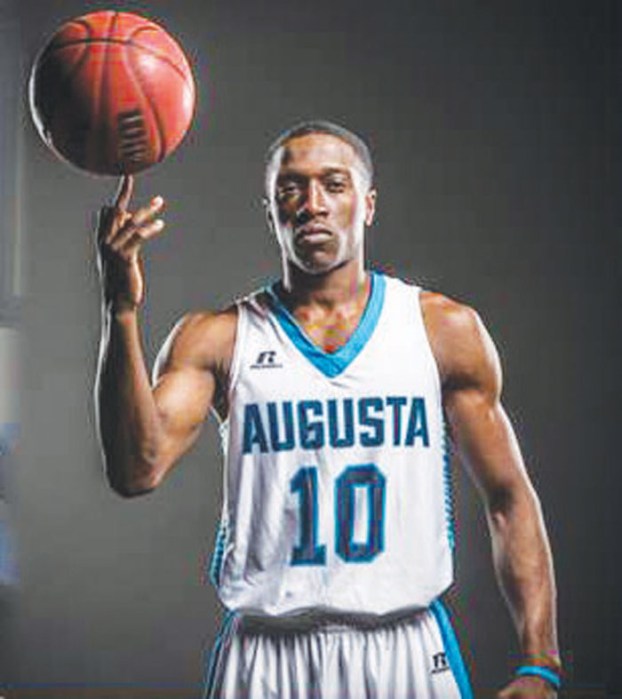 Augusta University photo Keshun Sherrill, a former West Rowan High School star, has signed to play professionally in the Netherlands. Sherrill was a two-time All-American at Augusta University and scored 2,333 points in his career there. As dominant as a 5-foot-9 player can possibly be at the high school and Division II college levels, Keshun Sherrill is ready for the challenge of professional basketball.

A pro deal came together swiftly for Sherrill, the West Rowan High mighty mite who continued his development at Augusta University so superbly that he had his jersey retired by the school.

A two-time All-American during his time in Georgia, Sherrill is a point guard who performs double duty as a prolific scorer. He graduated as the leading point-producer in Augusta and Peach Belt Conference annals with 2,333 points. He averaged 22.6 points per game as a senior when he was PBC Player of the Year and Augusta’s Male Athlete of the Year.

Sherrill has signed  to play in the Netherlands for New Heroes Basketball in a city known to the local population as Den Bosch. It’s pronounced  “Den Boss.” The English translation is “The Forest.”

“Things did happen really fast for me on a contract,” Sherrill said. “My agent told me we had a good offer and with a few perks thrown in, it could  the right offer. We got all the perks we asked for, and I accepted and signed (on July 11). It was a quicker process than I ever expected.”

The perks included a car. That was the main one. Sherrill will be housed by the team in an apartment that he’ll share with another American.

“There are a lot of things that the team is taking care of,” Sherrill said. “Basically my job is going to be to show up and play basketball. That’s kind of been the dream for a long time, to have basketball as my job when I got out of college.”

Sherrill is headed to one of  the more densely populated sections of the planet, with 17 million people stuffed into a country with a land area similar to Maryland’s. He’ll be playing in a clean, blue, 3,500-seat arena and competing in the Dutch Basketball League, the top pro organization in the Netherlands.

It’s a nine-team league. The level of  play is strong because teams in the DBL are allowed to carry four import players —  defined as players without Dutch passports. Many imports are former American college standouts. Last season’s all-league team consisted of four Americans and a Croatian. Former Nebraska point guard Lance Jeter was regular season MVP and Florida Gulf Coast’s Chase Fieler, who made a name for himself during a March Madness run in 2013, was playoff MVP.

Sherrill’s new teammates include Mike Miklusak, a shooting guard from Western Illinois who signed with New Heroes right before Sherrill did. New Heroes also has signed 6-foot-7  forward Norville Carey. A native of the British Virgin Islands, Carey played ball in the states at Rider University.

Sherrill’s coach will be a Croatian — Silvano Poropat.

“I’ve done a lot of research on the internet, and one great thing I’m going to be part of a winning program,” Sherrill said. “Den Bosch has won their league 16 times, more than anyone.”

Sherrill’s most successful high school season was in 2009 when he and his big brother, K.J., who is three years older and stands almost a foot taller, were teammates at West Rowan.

K.J. has signed to play in Germany again this year. He has already headed overseas because he wanted to experience the warmth of a German summer for the first time. He already knows more than he wants to know about German winters.

Keshun was thrilled when his research revealed that the Sherrill brothers are going to be neighbors, relatively speaking, in Europe.

“We’re only going to like an hour and a half apart by train,” Keshun said.

There’s a lengthy break midway through the European basketball season, built around Christmas. The brothers, who have basketball as well as blood in common, already have made plans to share the holiday together. Besides that year at West Rowan, they also were teammates for a year at Augusta. Their bond is strong.

Keshun will head to the Netherlands on Aug. 16, four days after he turns 23. Communication won’t be an issue after he arrives, as a high percentage of the Dutch population speaks English. Still, he’ll learn a few basic phrases in Dutch, things his parents taught him to say often over the years — like please, thank you, and yes, sir.

Most of Keshun’s advice on the next phase of his life has come from another older brother, 28-year-old Jamel Carpenter, who produced some huge games for Fayetteville State University and is now working in Kansas City. The three brothers still rank 3-4-5 on West Rowan’s all-time scoring list, scoring 4,973 points between them. Keshun owns the bragging rights over his taller siblings, though. He poured in 1,907.

“Jamel and I talk for 30 minutes at a time on the phone, just about how life is,” Keshun said. “We talk about how blessed our family is and how far basketball has taken us.”

Dillon brothers’ 3-on-3 fund-raiser is a ‘win-win’

By David Shaw sports@salisburypost.com SALISBURY — Give the Dillon Brothers, Richard Childress Racing and the NASCAR community credit for a... read more