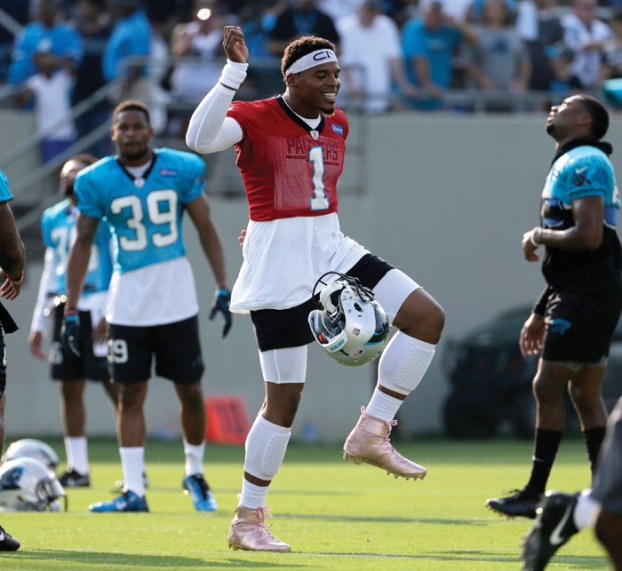 SPARTANBURG, S.C. (AP) — Cam Newton was back doing what he does at practice — dancing, playing up to the crowd and, most importantly, throwing passes.

Newton, who underwent surgery to repair a partially torn rotator cuff in his right throwing shoulder in March, fired several passes in the 10 to 20-yard range in his first practice with teammates since the end of last season.

Panthers coach Ron Rivera said he was very pleased with the velocity Newton had on the ball, but added there is room for improvement.

“He was a little rusty early on and his timing was off a little bit, but it was practice one and you can see he was getting more and more comfortable back there,” Rivera said.

Rivera said the Panthers will keep Newton on a “pitch count,” limiting his throws in practice.

Newton said through a team spokesman that the practice was another step in the recovery process.

“It’s a start,” Newton said. “Everything felt good, but we have a long way to go to get where I know we can be. Tonight was just fun getting out on the grass in front of the fans and throwing it around a little bit.”

In between drills Newton smiled, showed off his dance moves and displayed his well-known playfulness by using his arms to direct the crowd at Gibbs Stadium to stand and cheer in sync.

“He is infectious in terms of that,” Rivera said.

“Mentally he was pretty sharp and he did a good job of not trying to do too much,” Shula said. “I think all of us are pretty pleased. … You can tell he was eager to get back out and it’s a good start.”

After spending several minutes stretching out his shoulder before practice, Newton showed good zip on the ball on a series of short slant, seam and comeback routes.

His first throw during team drills was a completion in the flat to tight end Ed Dickson, but his second pass — also intended for Dickson — was intercepted by cornerback James Bradberry who jumped the route.

Newton bounced back with a 35-yard completion to Russell Shepard during 6-on-7 drills — by far the longest pass he attempted all night.

Shula said as training camp progresses Newton will throw longer passes, but overall it was a solid night for the 2015 league MVP.

“He just has to try not to do too much,” Shula said. “As a coach you always want your guys to get as many reps as you can, especially at that position. We are playing catch up, not just with him but with some other guys. … But our goal is to have him ready for the (regular season) opener.”

The 28-year-old quarterback injured his shoulder last December in a win over the San Diego Chargers, but finished the season. The Panthers hoped rest during the offseason would allow the shoulder to heal naturally, but when it didn’t respond as well as expected he opted for surgery.

Newton is coming off the worst statistical season of his six-year career.

He completed a career-low 52.9 percent of his passes with 19 touchdown passes and 14 interceptions. However, his offensive line struggled to protect him all season.

NOTES: Cornerback Captain Munnerlyn did not practice because of a hamstring injury. … Wide receiver Devin Funchess was carted off late in practice with cramps. … Rivera said he liked the explosiveness of first-round draft pick Christian McCaffrey.