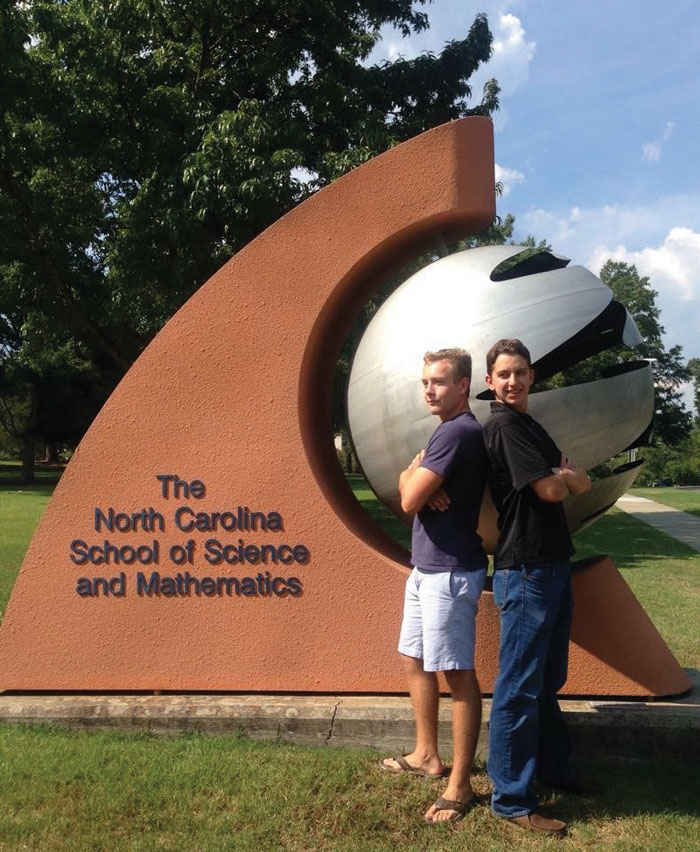 N.C. School of Science and Math

DURHAM — James Boyd and William Clark, both of Salisbury, graduated with honors last month from the N.C. School of Science and Math in Durham.

James and William were friends long before they entered kindergarten. Both graduated from Sacred Heart Catholic School, where they excelled academically and athletically. They participated in student government, clubs and community service projects during their time at Sacred Heart.

During the spring of their sophomore year, they were both accepted into the School of Math and Science, and they decided to live together during their junior year.

While in high school, James excelled in sports. He played soccer for four years, participated in track and field for two years, and still holds the Cannon School record for the triple jump. He played on the ultimate frisbee team throughout high school and was team captain his senior year. He is currently on the State Triforce Ultimate Frisbee team.

James also volunteered at a school in Tanzania, Africa, and went on a mission trip to Costa Rica. In addition, he helped build homes with the Habitat for Humanity organization. He also spent a year in the neuroscience lab at Duke University aiding in research.

William also spent a year at Duke University when he was selected to participate in a course examining post-World War II literature and history. He received both biology and history academic awards and was published by the UNC Press for his work in literary theory.

William participated in many local Piedmont Players productions before and throughout his high school career, including “Joseph and the Amazing Technicolor Dreamcoat,” “The Wizard of Oz,” “High School Musical,” “Tarzan,” “Little Mermaid,” “Macbeth,” “Les Mis” and this summer’s production of “Bring It On.” He also participated in theater at the N.C. School of Math and Science, starring in “You Can’t Take it With You,” “Bring Back the ’80s” and “Middletown.”

William is the lead vocalist and guitarist for the band If You Have to Ask. He ran cross country for two years and played on several intramural sports teams at the School of Science and Math.

William accepted a full scholarship to attend the University of North Carolina at Chapel Hill beginning next month. His major area of study is undetermined.

Both students have had exciting education careers and vow to remain good friends even if they sit on opposite sides of the basketball court.