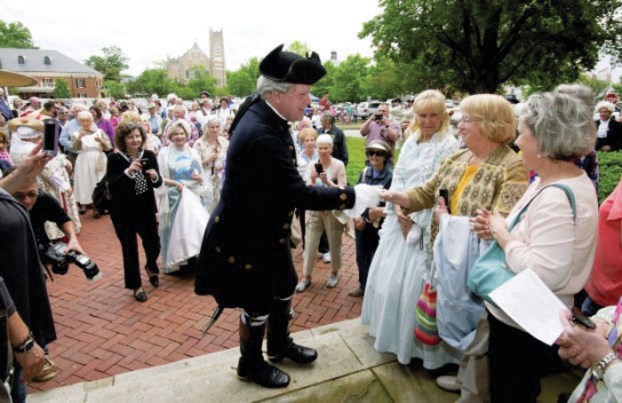 Lynn Bull portrays George Washington to commemorate the 225th anniversary of his visit to Salisbury in a 2016 program sponsored by the Rowan Museum. File photo

SALISBURY — Popular musicians Clay Lunsford and Matthew Weaver will perform a benefit concert for Rowan Museum Inc. from 7-9 p.m. Aug. 5 at the museum.

The concert will be held in the second-floor Messinger Room. The museum is located at 202 N. Main St. There will be homemade ice cream, while it lasts.

A suggested donation for concert-goers is $10.

The museum will open at 6 p.m. for people who want to see the ongoing Cheerwine exhibit, marking the company’s 100th anniversary.

Seating for the concert will start at 6:30 p.m. The appearance of Lunsford and Weaver expands on a History Club presentation the musicians made earlier this year.

The main floor of the Messinger Room can seat about 130 people. The third-floor balcony can handle roughly 50 more people.

Rowan Museum Executive Director Aaron Kepley said acoustics are especially good in the Messinger Room, which once served as a courtroom.

Lunsford, who lives in Union Grove, has performed in more than 10,000 shows throughout the Southeast over the past 50 years He has a unique style of thumb-picking his guitar and plays bluegrass, gospel, old-time and Appalachian music.

He is president of the N.C. Thumb Pickers Association and a member of well-known Gospel Voices Band.

Weaver, who calls Salisbury home, has been Piano-Instrumentalist of the Year at the N.C. Folk Festival Music Competition for six straight years. In 2012, he won the Bascome Lamar Lunsford Trophy (named for Clay’s late uncle), the most coveted country music award in North Carolina.

Weaver can play 19 different instruments, and he has performed in hundreds of country and bluegrass shows over the past 20 years. He made his debut on the Grand Ole Opry in 2011.

On the piano, Weaver plays a Floyd Cramer slip-note style, lending to his unique country/rockabilly and ragtime sound.

SALISBURY — The other day, I stopped in at the Rowan Museum headquarters in hopes of gathering some details on an Aug. 5 concert featuring musicians Clay Lunsford and Matthew Weaver.

As we talked, I couldn’t help but notice that Executive Director Aaron Kepley and Rowan Museum President Betty Mickle kept referring to the event as a “benefit concert.”

Whenever a nonprofit has a benefit concert, it’s often a good indication the organization’s funds are lagging and its finances could stand a positive jolt.

Such is the case right now for the Rowan Museum.

“We have a financial need that we’re currently struggling to meet,” Mickle said, “and we’re doing things all within a limited budget.”

Rowan Museum Inc. might be a victim of its own success.

When people see all the things Rowan Museum does — the annual antiques show, Germanfest and the Colonial Spring Frolic at the Old Stone House, summer history camps for elementary and middle school students, rotating exhibits at the museum headquarters, an annual Rowan County History Class (with Historic Salisbury Foundation), monthly History Club meetings, gingerbread house-making over the holidays and programs at the China Grove Roller Mill and Utzman-Chambers House — you might sense the museum is on a roll and prospering.

In addition, Rowan Museum has expanded its properties over the past year or so to include the roller mill in China Grove and the Garrison House that was part of the Salisbury Confederate Prison during the Civil War.

Add those properties to the Old Stone House just outside Granite Quarry, the Utzman-Chambers House on South Jackson Street and the museum headquarters in the 1854 courthouse at 202 S. Main St., and you have an organization that’s expanding on a budget that, quite simply, has not.

“We’re doing everything we can to contribute to the community and let people know the history and culture of Rowan County,” Kepley said, “and it’s getting more and more expensive to do that.”

Before Kepley and Mickle shared the museum’s annual budget with me, I tried to give a ballpark guess of what it is. I worried I might be low-balling things and maybe insulting the museum by estimating its budget at $500,000 a year.

We all agreed it’s a shoestring budget. With it, the museum is trying to pay one full-time staff person (Kepley) and three part-time employees, put on all the programming it has, build exhibits and maintain all those properties mentioned before.

The utilities and insurance alone are substantial — $34,000. Salaries, health care benefits for Kepley and payroll taxes represent $118,350 of the budget. Kepley makes a modest annual salary as executive director of $36,000.

For income, the museum depends on membership, appropriations from Rowan County and the city of Salisbury, events, grants, donations and memorials.

Other income sources are rental of the Messinger Room (at the old courthouse) and programming such as the summer camps.

Cheerwine helped considerably this year with a $10,000 donation. The museum has had a yearlong exhibit on Cheerwine marking the company’s 100th anniversary.

So far this year, the income from memberships, grants, Messinger Room rentals, donations and memorials are all down.

Mickle and Kepley stress the museum operates as frugally as possible, and the nonprofit museum could not make it without staff, volunteers and board members donating a lot of their time.

The financial challenges are real, but the museum has no intentions of cutting back on its mission of education and preservation of history, while also sharing its historic properties.

“Any museum that’s worth anything is educating and preserving,” Kepley said.

The museum often is looked to as the organization providing celebrations of things such as George Washington’s 1791 visit to Salisbury or Gen. George Stoneman’s Raid in 1865.

Mickle emphasized that Rowan Museum is an organization touching every area of the county and doing its part on a daily basis to preserve the county’s history.

“It’s all about trying to do better to get our message across,” Kepley added.

For those attending the Aug. 5 benefit concert in the Messinger Room, a suggested donation will be $10.

Besides the concert in August, the museum staff will put up its first exhibit at the county-owned West End Plaza, in the storefront of what used to be Salisbury Mall’s Hallmark store.

Other museum events in the works include Germanfest on Sept. 16, a chicken-and-dumpling dinner at the China Grove Roller Mill on Oct. 7, Night at the Museum III on Oct. 21, a picnic at the Utzman-Chambers House in connection with the Rowan Blues and Jazz Festival on Oct. 21, the 64th annual antiques show Nov. 10-12, gingerbread house-making at the museum Dec. 2 and Christmas in the Grove (China Grove), to be determined.

Rowan Museum has an endowment fund of $38,462 and encourages people to think of the museum when they are planning the settlement of their estates.

A Salisbury Post article published Dec. 31, 1949, called this the ‘Bridge of Contention.’ The Gheen Bridge, described as ‘old’... read more