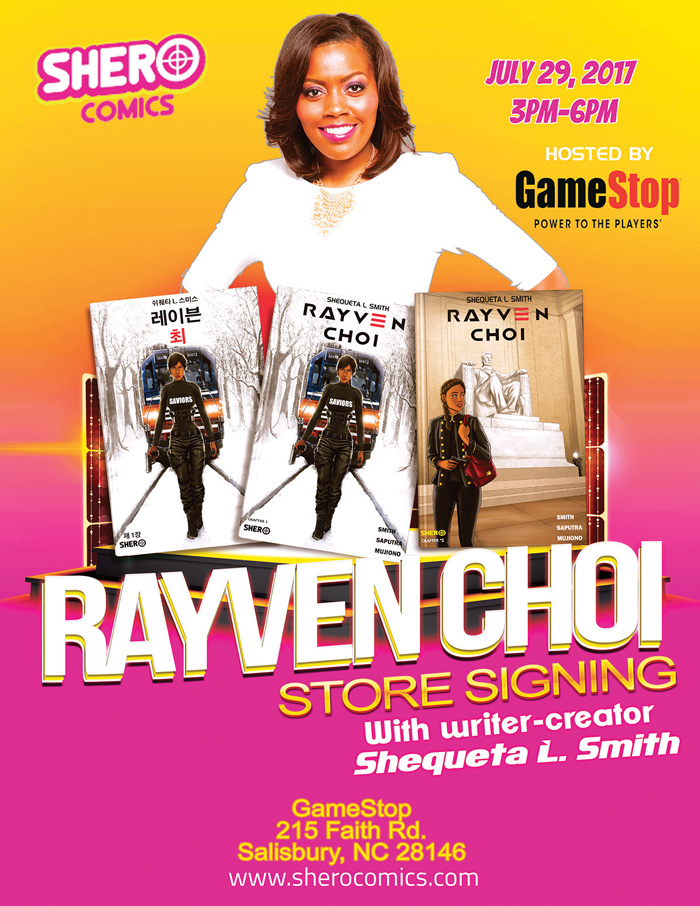 Submitted photo Shequita Smith will be in Salisbury Saturday signing her graphic novels.

Smith is scheduled to meet fans and will autograph copies of the first two books of her series.

Smith and her company — Shero Comics — are based in Los Angeles. She is a Salisbury native who graduated form North Rowan High School.

“Salisbury is probably the most important stop,” said Smith of her book tour. “I’ve lived in L.A. for 13 years, and I think it’s important to come back and let people know, ‘You can leave too!’ I hope to inspire people to follow their dreams.”

The graphic novel series is centered on the story of Rayven Choi, a young woman who witnessed the murder of her parents by a hitman when she was 5 years old. Choi finds herself growing up in Seoul, South Korea, where she is adopted by her father’s friend and is influenced by the local culture.

As an adult, Choi returns to America and becomes a bounty hunter to uncover the truth behind her parents’ murders. She wants to find the hitman who destroyed her family.

The storyline was created by Smith as a movie and then turned into the graphic novel series. Two books have been published so far, and a third is in progress.

The idea was inspired by a study-abroad trip Smith took to Korea during her time as a student at North Carolina State University.

“It was a whole unique experience. I came back with a fresh set of eyes,” Smith said. “The story is based on my experiences in Korea.”

Smith is proud that not only does Rayven Choi make history by being one of the first graphic-novel series to feature an African-American woman as the lead, but it also brings in an international audience by combining both Korean and African-American cultures.

“I want people to see that not only can an African-American woman be a successful lead in a comic book, but she can also have international appeal and international numbers,” said Smith.

The graphic novel series has gained popularity among comic fans. It has been highlighted on several popular blogs and podcasts and was recently featured in an issue of Publisher’s Weekly.

The first two books in the Rayven Choi series are available from Amazon Kindle, Comixology, Barnes & Noble Nook, Kobo and iTunes/iBooks and at sherocomics.com. The books are also available at several brick and mortar stores in Los Angeles, North Carolina and Chicago.

In addition to the signing at Salisbury GameStop, Smith will be in Charlotte Friday to showcase her Rayven Choi short film at the 2017 CineOdyssey Film Festival at the Mint Museum Uptown. Smith’s film plays at 7:45 p.m. and will be followed by a short question-and-answer session with Smith.

She will also travel to Korea next month as well as attend numerous comic-con functions in California. She hopes to tour the East Coast next year after the publication of her third book.

Smith is interested in speaking to groups of young people as well as offering her books to be sold in Salisbury stores.

For more information on Smith or the Rayven Choi series, visit www.sherocomics.com.