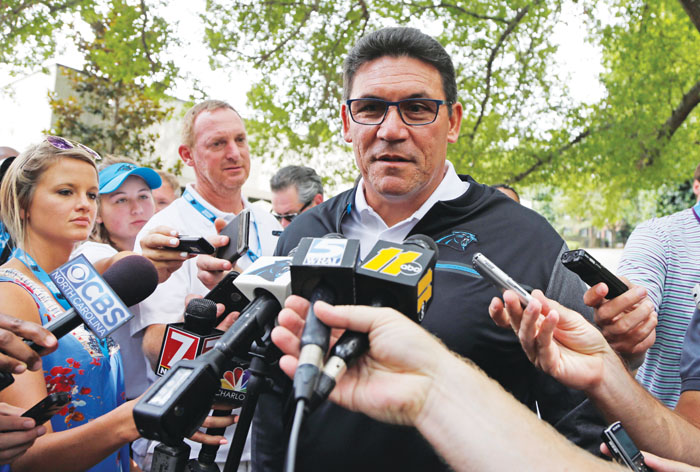 Carolina Panthers NFL football head coach Ron Rivera speaks to the media before the beginning of training camp at Wofford College in Spartanburg, S.C., Tuesday, July 25, 2017. The team has several issues looming including how much Cam Newton will throw and whether Thomas Davis and Greg Olsen will receive contract extensions. (AP Photo/Chuck Burton)

Newton reported to training camp Tuesday at Wofford College at 246 pounds — he has weighed as much as 260 in the past — and Rivera said the league’s 2015 MVP is on schedule in his rehab from surgery to repair a partially torn rotator cuff.

“Cam had a good week last week (throwing) from what I understand,” Rivera said. “So I am excited to see him in action.”

Look for Newton to be on a pitch count.

Rivera said head athletic trainer Ryan Vermillion has a plan for Newton this summer, but wouldn’t elaborate on the details. But it’s clear the Panthers will limit his reps in some capacity, at least at the beginning of training camp.

Rivera wouldn’t say if he expects Newton to play in the preseason or if he’ll hold him out until the regular season.

“The doctors will see how he is after every day” of practice, Rivera said.

Newton was not made available for interviews Tuesday.

Rivera said at the NFL scouting combine during the winter that Newton’s confidence was affected last season. But he believes the seventh-year quarterback has regained his swagger after throwing last week with teammates in Baltimore during their annual team bonding vacation.

Rivera expressed optimism that Newton has made steady progress in his recovery from offseason surgery on his right shoulder. He played the final month of last season with a partially torn rotator cuff. The original plan was to allow Newton to recover through rest after the season, but eventually Newton opted for surgery.

Rivera also said wide receiver Kelvin Benjamin is “where he needs to be” in terms of weight. The two-time NFL Coach of the Year expressed concern about Benjamin’s weight back in minicamp.

In other injury news, center Ryan Kalil will be limited as he continues to work back from a shoulder injury that ended his season prematurely last year.

NOTES: The Panthers waived defensive end Ryan Delaire (knee) after he failed his physical, and waived-injured wide receiver Charles Johnson after he underwent surgery on his right knee. … The team signed center Greg Van Roten, who was most recently with the Jaguars before being released in May. Van Roten has appeared in 10 career NFL games, after originally signing with Green Bay as an undrafted free agent in 2012.

PANTHERS’ OLSEN: HOLDING OUT ‘WASN’T THE RIGHT THING TO DO’

Olsen reported to training camp on time Tuesday, saying he didn’t want to hold out and be a distraction to an organization aiming to win its first Super Bowl.

The 32-year-old Olsen has two years left on his contract, but has outplayed his current deal, becoming the first tight end in NFL history with three consecutive 1,000-yard seasons. He was voted second-team All-Pro in 2015 and 2016.

Olsen contemplated holding out for more money, but ultimately decided against it.

“I just didn’t feel it was right for me to put my situation and my own personal interests above that of the team,” Olsen said as players checked into their dorm rooms at Wofford College. “If I don’t show up today and cause a big stink, what would have come of that was just not fair to everybody, from ownership to the last guy on the roster. It’s not something I wanted to be a part of when it came down to it. It’s not who I am.”

Olsen caught 80 passes for 1,073 yards and three touchdowns last season. He has 32 TD catches in six seasons with the Panthers.

“We feel very strongly about what we have been able to accomplish these last couple of years,” Olsen said.

It’s unclear when Olsen will get a new deal.

Carolina recently shook up its front office, firing general manager Dave Gettleman and replacing him with Marty Hurney on an interim basis. The decision was made, in part, because Gettleman didn’t grant contract extensions to Olsen and linebacker Thomas Davis, two of Carolina’s most popular players.

Olsen has a better working relationship with Hurney, who was responsible for bringing him to Carolina via trade in 2011 when he was the full-time GM.

Olsen said he met with Hurney after he was hired, that they had a “good talk” and understand each other’s positioning on contract negotiations. But despite the change in the front office Olsen said he’s been given “no promises” a deal will be worked out anytime soon.

With Olsen having two years left the Panthers may be more inclined to wait lest they set a precedent through which other players with multiple years remaining on their contracts begin asking for new deals.

Davis, who also reported to training camp on time, is more likely to get an extension because he has one year left on his contract. Davis was not immediately available for interviews.

Panthers coach Ron Rivera said there was no doubt in his mind Olsen and Davis — both team captains — would show up for camp.

“Those guys are professionals and they know how to separate business aspect from the team aspect,” Rivera said. “I really believe in those guys. I think it’s something the organization is going to work through.”

Said Olsen: “What we tried to do was no different than what happens around the league,” Olsen said. “It’s very common business for players and management to go back and forth and try to find common ground. …  We gave it a run, it didn’t work out and now I play out my contract and try to win a Super Bowl.”

Former Panthers offensive tackle Michael Oher recently suggested on Instagram that some players in the locker room were responsible for Gettleman being fired, and warned that karma would come back to get them.

Olsen said he had a good relationship with Gettleman, although he added that they didn’t always see eye to eye.

“As far as any personal grudges or animosity that brewed from all of this was just not the case,” Olsen said.

The Panthers have added several veterans to their roster this offseason, including defensive end Julius Peppers, left tackle Matt Kalil, cornerback Captain Munnerlyn and safety Mike Adams. Carolina went to the Super Bowl after the 2015 season, but lost 24-10 to the Denver Broncos.

Injuries and some inconsistent play by quarterback Cam Newton contributed to a 6-10 record last year.

“Everybody has been working real hard,” said veteran safety Kurt Coleman. “Now it’s about staying healthy and building that chemistry.”