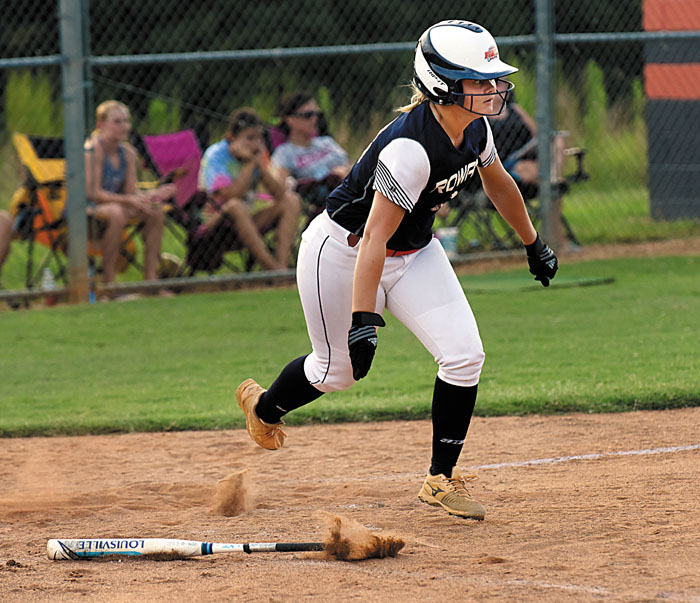 MORGANTON — Rowan County’s Legion softball team ended the season with two losses on Wednesday, a 7-5 setback against Cabarrus County in a semifinal and a 13-2 loss to Burke County in the third-place game at Catawba Meadows Park.

“It was a good season, a good start for Legion softball in Rowan County,” manager Todd McNeely said. “We were missing some key girls tonight (including ace pitcher Maddie Hunter and leadoff batter Maddie Trexler) and that showed up some with us playing two games.”

Rowan (8-7) played very short-handed. Just 10 of 18 players were in uniform, with a number of girls participating in a major showcase in Myrtle Beach.

Still, Rowan had a chance for a long time in the semifinal against undefeated Cabarrus, which went on to beat Rutherford County for the first Legion softball state championship.

“She pitched in both games and was a real workhorse tonight,” Rowan manager Todd McNeely said.

Hickory Ridge’s Megan Garrison had a two-out hit to put Cabarrus ahead 1-0. It was 2-0 after two innings.

Mackenzie Sprinkle, a rising junior at East Rowan, hit a three-run homer in the top of the third to put Rowan ahead, 3-2.

Cabarrus got three runs in the bottom of the inning to lead, 5-3.

Ellen Yang, a rising freshman at Salisbury High, hit a two-run homer in the fourth for a 5-all tie.

Hickory Ridge’s Lindsey Powell’s double keyed the go-ahead run for Cabarrus in the bottom of the fifth. Powell also pitched the fifth, sixth and seventh for Cabarrus.

Cabarrus added a run in the sixth for a 7-5 lead.

Rowan got the leadoff runner on base in the seventh, but a double play stopped the rally.

A tough loss didn’t leave Rowan in the best emotional for the third-place game.

Nicole Fleming had the biggest hit for Rowan.

“But the wheels just kind of rolled right off us in the first inning,” McNeely said. “We used three pitchers and made five pitching changes, taking girls out and then bringing them back in. Then they hit a grand slam in the fifth for the icing on the cake.”

Cabarrus won a thriller against Rutherford County in the championship game.  Cabarrus prevailed in eight innings, 5-4.

Central Cabarrus’ Riley Tucker drove in Central’s Kasey Rowden with the deciding run in the top of the eighth.

Powell, who hit a two-run homer early in the game with Tucker on base, pitched all eight innings.

There were 11 Legion softball teams in North Carolina this season. McNeely said there’s been overwhelming interest in the new summer sport and expects that number to swell to about 30 teams in 2018.