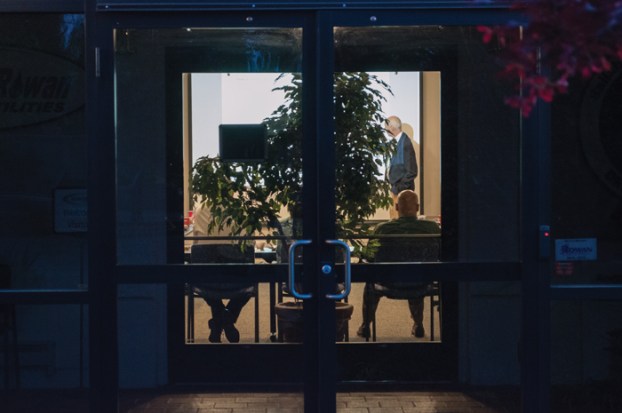 Salisbury City Council members and business leaders met in April during a closed-door meeting to discuss the future of Fibrant and receive a proposal from an interested company. If Salisbury chooses to lease Fibrant, it may need approval from voters, too. Josh Bergeron/Salisbury Post file photo

Editor’s note: This article is the fourth in a series examining the creation, operations, effects of, future of and other matters related to the city’s fiber optic network known as Fibrant. See the entire series here.

SALISBURY — In one scenario, the Salisbury City Council would need approval from voters before finalizing the future of Fibrant.

Months ago, the council began looking for private companies to buy, lease or manage Fibrant. That request drew responses from 14 businesses, which were narrowed to three. Now, two unnamed companies remain.

The city also has ruled out the possibility of a sale, leaving council members and a newly formed advisory group to choose between leasing Fibrant to a third party or finding someone to manage the service.

If the City Council and Fibrant’s advisory board choose to lease the service, voters would need to approve that decision, too, said Councilman David Post and City Manager Lane Bailey. In fact, Post says a ballot referendum on Fibrant “would be great.”

“It would allow us, for the first time, to take it to the public,” Post said. “I think that, and I can only speak for me, that if we find a good lease partner, that’s the best option.”

Mayor Pro Tem Maggie Blackwell said she also likes the idea of a lease for a relatively simply reason.

In large part, the current effort to find a lessee or manager for Fibrant centers on the utility’s financial performance. Bailey said the effort started at roughly the time he discovered that Fibrant used more than $3 million annually in funds from the city’s general fund.

“We started having conversations about how we could make the utility perform better,” Bailey said.

Post said the effort to find a lessee or manager started in April 2016, when he attended a conference in Austin, Texas. The conference — Broadband Communities Summit — was designed for cities such as Salisbury that operate broadband systems. Blackwell previously attended the conference, too.

“I’m the type of guy that sits on the front row, meets the speakers, shakes their hands. … I mean I meet everybody. That’s why I go,” Post said.

The organizers were among the many people he met at the conference. One was Joanne Hovis, president of the consulting firm CTC Technology and Energy, which is facilitating the process to find a lessee or manager for Fibrant.

Before hiring CTC, however, the council tried a consultant that was recommended by an N.C. State University professor. Post said the city didn’t maintain that consultant because the man claimed to own a stake in a company he promoted.

Of the 14 companies that responded, only six actually submitted a proposal to buy, lease or manage Fibrant. Those six companies were narrowed to three finalists. Now, only two companies remain.

Salisbury has cited economic development protections in state law as a reason not to release the names of all the companies that submitted proposals. The names released so far include AT&T, Fujitsu/NDDI, Rapidity, Terra Pact and Gridworx Corp.

To listen to proposals from companies, council members and an advisory board of local business leaders held multiple closed-door meetings in April.

Steve Fisher, president and CEO of F&M Bank, sits on the advisory board and said in an emailed statement that time will be the judge of whether Fibrant was a wise investment.

“If you took a snapshot of it today, it has created an access to technology that our community would not otherwise enjoy,” Fisher said in the statement. “However, as a purely financial investment or economic development tool, it has vastly underperformed.”

He said financial performance is the most critical area in which Fibrant needs to improve. He attributed that opinion to his financial background.

“Sustainability and financial performance go hand in hand,” he said.

It’s unclear when the City Council will make its decision or what that decision will be, but a ballot referendum is a possibility. It would also be a first for Fibrant. The more than $30 million in debt used to pay for initial construction of the city-owned service did not require a vote by Salisbury residents.

Post said the public should have a say in the future of the service, and he said the 2018 primary elections are the earliest time that such a vote could occur.

“It scares everybody except for me,” he said. “I think having a public referendum is exactly the right thing to do. I think it gives us a chance to go to the public and say, ‘This is what we have and this is what we need. We’re either going to keep doing it ourselves or we’re going to lease it and we need your support to enter into a lease.’”

A lease, however, would also come with an increased interest rate on the city’s bond debt, Post said. Currently, Salisbury owes $27.17 in principal and nearly $4 million in interest on the initial bonds used to build Fibrant.

Fibrant’s bonds are tax-exempt, he said. With a lease, Salisbury would lose that tax exemption. However, Post did not express concerns about an increased interest rate because of significant savings realized from recent refinancing.

Some other council members declined to state their opinions about a lease or management contract.

Mayor Karen Alexander said she needs more information before revealing her favored option. Alexander questioned whether the city would be allowed to lease Fibrant by the legislature. And she noted that she is only one of five votes on the council.

“There is still a lot of work to be done, and anything that happens must also be approved by the laws that are already in place in terms of whether we can lease or manage,” she said.

Blackwell would have a vote on the matter if the council and its advisory board make a decision before December, when new council members are customarily sworn in. She opted not to run for re-election.

With a lease, Blackwell said, the council should require an agreement that would set standards for things such as Fibrant outages and customer service.

But a lease is only one option. The city could opt for a management contract.

Alexander said the two companies being considered by city officials have not submitted proposals that she would consider final.

Whether it’s a lease or management agreement, Bailey said he feels optimistic about the future of Fibrant.

“We certainly have some work to do, but I feel optimistic about our chances of improving the utility,” he said. “In terms of speed and reliability, Fibrant is second to none. … Even if you have another provider, we probably lowered your broadband bill, your internet bill, because they’ve lowered their prices to be competitive with Fibrant.”

“With the right public-private partnership, it could be an absolute shining star,” Winrich said.

Coming Thursday: How another city in North Carolina has used its fiber optic network.

Fibrant in Focus: City-owned service ‘a mixed bag’ for Salisbury

Editor’s note: This article is the third in a series examining the creation, operations, effects of, future of and other... read more