Dillon brothers’ 3-on-3 fund-raiser is a ‘win-win’ 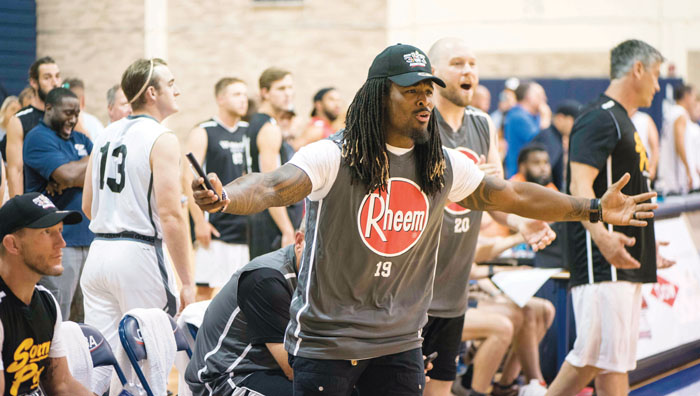 JON C. LAKEY / SALISBURY POST Former Carolina Panthers and Pittsburgh Steelers running back DeAngelo Williams (19) coached one of the teams in the Dillon Brothers 3 on 3 Basketball Tournament at Catawba’s Goodman Gym on Wednesday. The event benefited the Childress Institute for Pediatric Trauma. Sixteen teams made up of NASCAR drivers and crew members, as well as former NFL and NBA athletes were part of the celebrity rosters that competed in the tournament.

SALISBURY — Give the Dillon Brothers, Richard Childress Racing and the NASCAR community credit for a slam dunk.

The racing conglomerate joined hands with nearly 100 basketball wannabes and once-weres at Catawba’s Goodman Gym Wednesday afternoon — and there were no losers.

“A lot of guys in our sport do this for fun,” said former crew chief and current Fox broadcaster Larry McReynolds. “But this was fun for a great cause. That’s a win-win.”

It was. Close to 400 spectators filled the bleachers as drivers Ricky Stenhouse Jr., Bubba Wallace, David Ragan and Ty and Austin Dillon — along with a phone book of famous friends and acquaintances — took the court to support the Childress Institute for Pediatric Trauma, a charity that provides services and education for injured children and their families.

“This cause means a lot to us,” said Ty Dillon, a Winston-Salem native and Childress’ grandson. “Austin and I always enjoyed playing basketball, whether it was at school or in the neighborhood. We wanted to find a unique way to raise money and have fun at the same time. This thing has taken off and just gotten bigger and bigger every year.”

Billed as the 3rd annual Dillon Brothers 3-on-3 Basketball Tournament, the mid-summer fund-raiser was beneficial to all. Robert Gfeller, Jr., executive director of the Institute, reported that some 12,000 children suffered traumatic injuries in 2014. Last year the total dipped to 9,500.

The list of celebrity participants went beyond NASCAR royalty. There was retired New York Giants cornerback Jason Sehorn — a 2001 Super Bowl participant in a one-sided loss to Baltimore — zipping passes around the perimeter. And former Panthers’ tight end Gary Barnidge setting a perfect pick for a teammate. At the other end of the floor was former UNC forward Desmond Hubert, who played professionally in Italy last winter but is currently seeking gainful employment. Nearby was Craig Dawson, who netted 13 points in Wake Forest’s 2000 NIT championship-game victory over Notre Dame.

An impossible-to-miss sight was seven-footer Brad Miller — who played 14 seasons for six NBA teams and once eluded a punch from Shaquille O’Neal — driving the lane against defenseless opponents.

“I played with him last year, but against him this year,” said six-footer Charles O’Neal — no relation to Shaq, but the girls varsity coach at Reagan High School in Pfafftown. “He said to me, ‘I can’t let you get the ball.’ I said, ‘Good. If you do, it’s over.'”

McReynolds motivated his team be re-enacting a scene from the movie “Hoosiers.”

“I brought them out to the gym before anybody was here,” he said. “We measured the distance from the rim to the floor. It was the same as was in their little field house.”

Kidding aside, there were some solemn moments. Stenhouse, who has won races at Daytona and Talladega this year, spoke of a heartfelt connection to the cause.

“I grew up close to Memphis,” he said. “So I visited St. Jude’s (Children’s Hospital) and Nationwide (in Columbus, Ohio) pretty often. It made me realize that if there’s a way to help, we need to do it. This is just one small thing, but it will help.”

Among the headliners was former Panthers and Steelers running back DeAngelo Williams, who served as coach for one of the 16 teams and took a turn as PA announcer. A fan-favorite, he’s a close friend of Austin Dillon and currently employed by Impact Wrestling in Texas.

“For me, it is personal,” he said. “My nephew was born with one kidney and went on dialysis. He had 26 surgeries before the age of nine. That’s life, and when you go through it like we do, you often miss the small things. It’s not just the big picture. It’s the small things inside the picture.”

Dawson — another family friend who coached Austin Dillon in middle school and as a junior varsity player at Forsyth Country Day High School — related his own sad story.

“I had a four-year old cousin who passed away when I was seven,” he recalled. “Even though it was a long time ago, that’s something you never forget. I have an eight-year old girl of my own now, so when Austin brought this up I dropped everything I was doing and got on board.”

Ragan, winner of five NASCAR races but none since 2013, has a Catawba connection. Years ago he was friends with former soccer players Nick Denton and Seth Clark.

“I’ve been here before,” he said with a smile. “My wife and I, our very first date was a soccer game here at Catawba.”

Yesterday he found satisfaction in driving left — and right.

“Everyone in the NASCAR industry wants to give something back,” Ragan said. “I have a family,  a three-year old and a one-year old. This puts it in perspective. We’re very grateful our kids have never been seriously injured, but you never know what tomorrow may bring.”

Of course, that was the common denominator. Perhaps Sehorn, who retired after 10 NFL seasons in 2003 and once waved the green flag at Daytona, said it best.

“We’re here to raise awareness,” he said. “Injuries are going to happen, we all know that. But how do you fund it? How do you get involved?”

Then, after a pensive pause, he added: “This is how.”