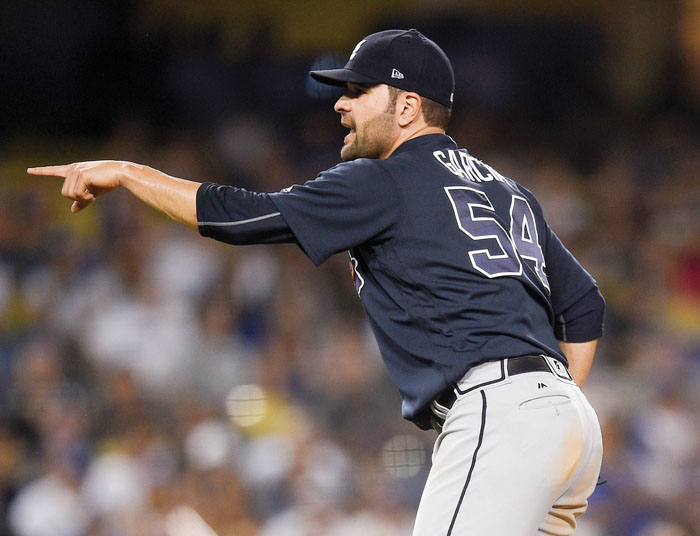 “We all know his track record. He certainly knows how to pitch. It’s a nice addition to our club,” Molitor said.

Garcia stopped by the visiting clubhouse Monday afternoon to collect belongings, get a travel itinerary and say goodbye to Braves teammates who were getting set to face Arizona at Chase Field. He’s expected to join the Twins at Dodger Stadium on Tuesday.

Garcia’s name had been circulating in trade rumors during the past week, and Braves manager Brian Snitker said he handled all of the talk well.

“Seeing his name out there and the game he pitched the other day (seven innings at Los Angeles), just the professionalism he had through the whole thing,” Snitker said. “Talked to him today, and he’s so appreciative of everything here, as we are of him. He’s a great teammate and he did a great job for us.”

While Garcia’s numbers don’t jump off the page, the Twins were in need of a veteran arm to put into a rotation that has been largely disappointing behind the top two starters, Ervin Santana and Jose Berrios.

The Twins have been one of baseball’s biggest surprises through the first four months of the season, hovering near the top of the AL Central a year after posting the worst record in the big leagues.

After losing two of three at home to Detroit over the weekend, they were still just 2½ games behind first-place Cleveland as they headed into a series with the Dodgers in Los Angeles.

Starting pitching was their biggest need, with Kyle Gibson (6.08 ERA) and the banged-up Hector Santiago (5.63) both struggling and Phil Hughes (5.87) now on the 60-day disabled list.

As it stands, Garcia will slot in as the No. 3 starter behind Santana and Berrios and likely ahead of Adalberto Mejia and Santiago, when he returns from a rehab assignment.

Despite the better-than-expected start to the season, new Twins bosses Derek Falvey and Thad Levine have said that they will be active as the trade deadline approached, but didn’t anticipate sacrificing some of their top-rated prospects to land a major name.

Staying true to that public stance, the Twins did not pay a hefty price for Garcia, who is in the final year of his contract.

The 33-year-old Recker has appeared in 206 major league games with four teams, including the past two seasons in Atlanta.

Garcia had been scheduled to start Wednesday’s series finale at Arizona before the trade.

KERSHAW HAS BACK STRAIN, NOT HERNIATED DISK LIKE LAST SEASON

LOS ANGELES (AP) — Braced for the worst possible news on injured ace Clayton Kershaw, the Los Angeles Dodgers tried to find some comfort Monday that his back diagnosis did not appear as dire as last season.

The Dodgers put their superstar left-hander on the 10-day disabled list, a day after he exited a start after just two innings. They called the injury a lower back strain, not the herniated disk issue that sidelined him for 2½ months last year.

A report by Fox Sports said Kershaw would miss four to six weeks.

“Relative to the scan from last year, much better,” manager Dave Roberts said. “We have to take it day to day and see how he responds to medication and rest.”

“A timetable has kind of put out there, but we don’t know. With Clayton, medicine and his desire, anything can happen,” he said.

Kershaw leads the majors with a 15-2 record and a 2.04 ERA. If the early report holds, he would be able to return in early September, plenty of time to prepare for the postseason.

The Dodgers have the best record in baseball at 68-31 and entered play Monday with a 10½-game lead in the NL West.

Last season when he was hurt, the team went 38-24 while he was out.

“It’s different circumstances,” third baseman Justin Turner said. “Last year we were down (eight) games and this year we’re up 10. I think knowing the way we played last year and responded in his absence, makes it little bit easier pill to swallow.”

The Dodgers have not named his replacement in the rotation. They also put Brandon McCarthy on the DL with a blister issue, activated left-hander Hyun-Jin Ryu (foot bruise) and started him against the Minnesota Twins.

“We all feel for Clayton because he’s a big part of what we’re doing,” Roberts said. “But we look at our group and what’s in place, we’re going to keep winning baseball games.”

“We’ve been here before. We are definitely better with Clayton. But we’re going to keep winning baseball games and keep this ship going,” he said.

Kershaw, a three-time NL Cy Young winner, did not speak to the media prior to Monday night’s game. Roberts said the medical staff, front office and back specialist Dr. Robert Watkins would meet prior to the game to devise a plan for Kershaw.

Prior to the injury there had already been speculation the Dodgers were interested in acquiring Texas Rangers ace Yu Darvish prior to the July 31 trading deadline.

“Everybody wants to drive a Ferrari, so why not get a like Darvish?” closer Kenley Jansen said. “The thing is, that’s not our decision. We know we have a great team. We believe in this team It can do the job to win a World Series. With no changes.”

Jansen said he was sick to his stomach at the Kershaw news.

“We just have to pick him up,” he said. “The best way for us to pick him up is to keep playing like we are right now and be the best team we are in the majors.”