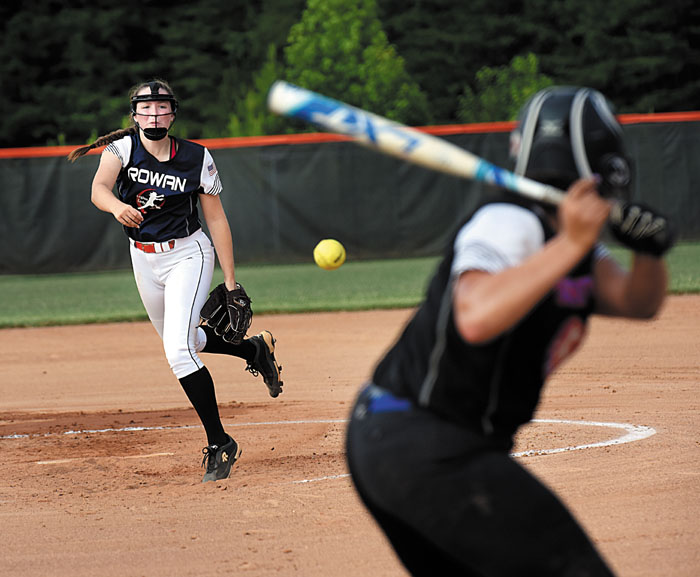 CHINA GROVE — It was scoreless for a long time on Tuesday, and with each zero that went up on the board at Carson High, Rowan County Legion softball manager Todd McNeely got a bit more anxious.

“Randolph County has a lot of people who can hit the ball out of the park, and you worry that it’s going to be decided by one mistake,” McNeely said.

Rowan hurler Maddie Hunter never made a mistake. She pitched a one-hitter, struck out 12 and carried most of the load as Rowan beat Randolph, 3-0, in the first playoff game in program history.

Rowan, the No. 2 seed from the Central Division,  will play in the state semifinals today at Catawba Meadows Park in Morganton at 5 p.m., against undefeated Cabarrus County. The Rowan-Cabarrus winner will play a Western Division team in the championship game. At the same time, on another field, the Rowan-Cabarrus loser will play a Western Division team for third place.

Nicole Fleming got the key hit for Rowan County (8-5) in the fifth inning.

An error on a long fly ball gave Randolph a chance to break on top in the first, but Hunter calmly struck out Randolph’s No. 3 and No. 4 hitters with a runner at third base.

“I wasn’t really nervous,” Hunter said. “We’ve got a pretty solid defense. I knew if I made good pitches, we’d make the plays.”

Then Hunter, a Gray Stone graduate who is headed to Catawba College, got on a roll and it became a game of catch between her and catcher Mackenzie Sprinkle. Hunter struck out seven consecutive batters at one point before Randolph pitcher Heaven Maness, All-State as a freshman at Southwestern Randolph High, skied an infield popup to break Hunter’s streak.

“I’ve been pitching a long time,” Hunter said. “Batters make adjustments to  you and figure you out, but I’ve worked really hard to be a strikeout pitcher.”
Hunter doesn’t just bring some heat, she’s smart. She got ahead in the count, and then got swings and misses on shoulder-high pitches that Randolph chased. She also displayed a nasty, pull-the-string changeup that she learned at Catawba camps. At least three of Hunter’s strikeouts, including one of scary slugger Samantha Lagrama, another All-State player from SW Randolph, came on changeups.

“That’s a very hard pitch to learn, but because it was so hard, that made me determined to do it,” Hunter said.

Taylor Walton and Kary Hales had singles for Rowan in the fourth, but Maness worked out of the jam, and it was still 0-0.

When the first two Rowan hitters went down quickly in the bottom of the fifth, an uneventful inning appeared to be transpiring, but Haley Strange fouled off pitches until she walked. That gave Fleming a chance to swing.

Fleming, a rising junior at East Rowan who split time between the varsity and jayvees last season, was batting 10th in an 11-girl lineup, but McNeely had confidence in her.

“We don’t have any weak bats and you can’t relax at any part of our lineup,” McNeely said. “Just about everybody we send up there can not only get a hit, they can hit it out.”

What Fleming, a right-handed batter did, was put the ball in a perfect spot. It was a line drive over the first baseman, with the right fielder playing toward right-center.  The ball had a lot of slice to it and after it went spinning across the foul line, it just kept rolling toward the 200-foot fence in right field.

Strange is not an especially fast runner, but she hustled around the bases and beat the throw home standing up. Third base coach Adrian Gantt kept Fleming running all the way and she made it to third base,

“She’d been pitching me outside all day, and I just told myself that if she stayed out there, I was going to roll with it and hit it to right field,” Fleming said. “It worked out for us.”

After Hunter, batting 11th, helped herself with a solid RBI single to left, she had a 2-0 cushion.

Hunter still had six outs to get, and she finally allowed a hit when Maness bounced a ball past third baseman Liza Simmerson down the left-field line and stretched it into a double. Maggie Poindexter hit a ball very hard, but Rowan center fielder Maddie Trexler tracked it down for the third out.

Trexler’s speed produced the run that gave Rowan a 3-0 lead in the bottom of the sixth. She beat out a routine roller to the second baseman, stole second, and moved on to third when the throw got away. She scored when Hales stroked a sacrifice fly.

Hunter walked Lagrama with one out in the seventh, the only walk she surrendered, but she ended the game in style — with her 11th and 12th strikeouts.

NOTES: Fleming’s older brother, Ashton, was an infielder for the Rowan Legion baseball team from 2011-13. … Rowan had a hit in every inning. Fleming and Trexler had two apiece, while Hunter, Walton, Hales and Allison Ennis had one each. Simmerson had good at-bats, with two walks and long flyout to the center-field fence. … Rowan slugger Brooke Lowery (appendix) is recovering from surgery and is out of action. … Central Division champ Cabarrus has a strong team with a number of All-South Piedmont Conference players and pounded Stanly 10-0 on Tuesday to advance to the semifinals. Cox Mill’s Madison Michael pitched a perfect game until the fifth. Hickory Ridge’s Lindsey Powell had a two-run homer and a two-run double.