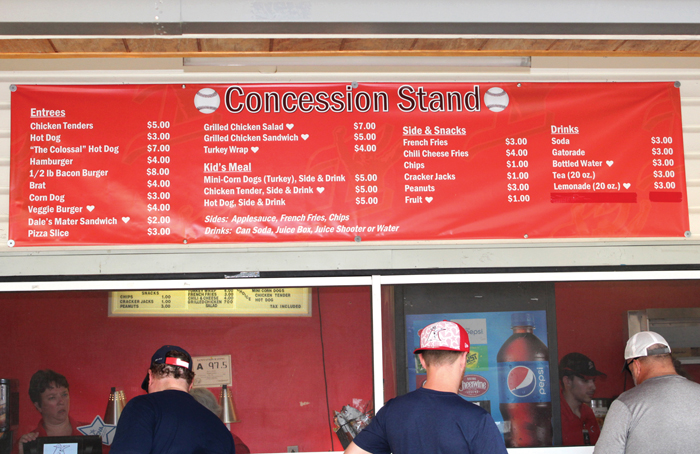 Andie Foley/For the Salisbury Post Healthy concessions at the Intimidators Stadium are denoted by symbols of hearts. Attendees can earn $5 to spend on these items by completing 10 pushups or 20 jumping jacks.

KANNAPOLIS – Together in partnership with the city of Kannapolis, the Kannapolis Intimidators have hosted monthly Get Healthy Nights during home games this season.

These events complement the city’s “Discover a Healthy Life” initiative, a campaign started in 2014 to highlight the city as a unique place where one can live a healthy, holistic life. Specifically, Kannapolis and the Intimidators aim to encourage exercise and healthy eating — but with a fun twist.

Attendees at “Get Healthy Nights” can receive $5 off healthy concessions by completing 10 pushups or 20 jumping jacks as they enter the gates. Healthy concessions include yogurt, fruit, veggie burgers and turkey wraps, and are denoted on concession menus with symbols of apples or hearts.

“It’s Get Healthy Night, so we hope all of you have traded your cheese fries for the fruit and applesauce that they have at the concessions!” an announcer said during the game. The proclamation preceded a battle between brothers Joseph and Jacob Blumberg in a game called Veggie Shout.

Veggie Shout represented one of many healthy-themed activities taking place between innings. It required participants to take turns listing vegetables, with the first to draw a blank losing the game.

Winner or loser, both brothers were nothing but smiles following the exchange.

“Jacob named three and I named five,” older brother Joseph said, clearly proud of his accomplishment. He and his family make it to Intimidators games when able, as the brothers are fans of player Evan Skoug.

Their mother, Emily, said the boys participated in the pushup challenge at the gate, and didn’t hesitate to use their earned coupons.

“They used them to get waters at the concession stand,” she said

Game attendees also had the chance to try their hand on a pull-up bar, an activity provided by the United States Marine Corps. Marines were present by the metal structure to offer assistance to children and offer recruitment information to adults and teens.

The Marines would also participate in between-inning festivities, entertaining the audience with a Base Race complete with ten pushups at every plate.

“We’re trying to spread the word about the Marine Corps,” said Ross Klosheim, one of the Marines in attendance. “This is an opportunity to see some of the kids in the area.”

This season’s last Get Healthy Night will be held Aug. 25, and attendees are encouraged to arrive early for the chance to earn a coupon of their own.