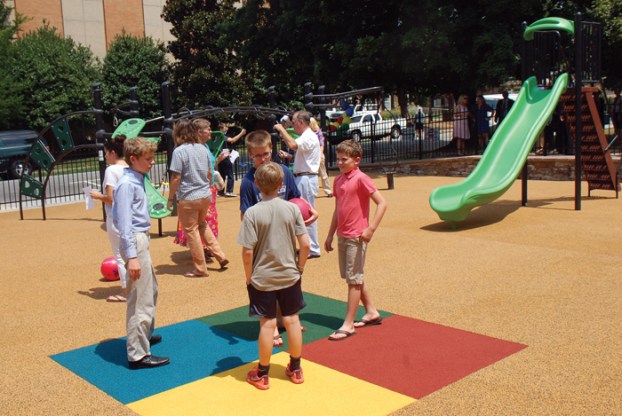 SALISBURY — When the greeting, prayers, Scripture, acknowledgements and official words of dedication for a new playground have all been said, what’s next?

And so opened on Sunday First United Methodist Church’s new children’s playground along South Church Street, not too far from the West Bank Street corner.

Not only will children of the First Methodist preschool, daycare center and congregation in general enjoy the playground, it’s open to the community as well, Conforti said.

It features a bouncy, rubberized surface for soft landings, playground equipment for preschoolers to middle schoolers and a redwood pergola for shade. The playground and some of its equipment also are accessible to the physically disabled.

Natural stone borders the play area and beyond that an attractive fence.

A sitting wall near the South Church Street entrance will serve as a nice waiting area for preschoolers being picked up by parents in the late morning.

Bradley Williams played a key role in guiding the construction of the project, as did folks such as Kate Goodman, Victor Smith of Landscape Concepts and Central Piedmont Builders, the general contractor.

Conforti also praised past trustee chairmen Bob Roakes and Mel Smith and current chairman Staton Carter for their work on the project.

A gift from the estate of Peggy Glasco was instrumental in the playground, which had to overcome troublesome drainage issues.

“This church has meant a lot to our family through the years,” said Monice Williams Gerald, who now lives in Myrtle Beach. Four generations of Williamses, starting with her grandparents, have attended First Methodist.

Monice pointed over to retired pastor Bill Osborne, who had come to First Methodist Church long ago as a 25-year-old. He confirmed her, Monice said, as well as christened her child, married her and served at the funerals of both her parents.

Robert Neal Williams Sr. died in December of 2008 and Monice Brown Williams passed away almost three years ago in 2014. Monice Williams taught school her whole life, so the playground was a fitting tribute, given her strong connection to children.

Her parents would have been humbled and surprised to think anything would be named in their honor, Monice Gerald said, adding it always is “an incredible feeling” to return to her home church at First Methodist.

“This church put down many roots for us,” she said. “Our ties to this church run very deep.”

Bradley Williams’ children, 12-year-old Courtney and 9-year-old Meredith, helped at the dedication by reading the Scripture and cutting the ribbon before the playground was opened.

In his opening prayer, Conforti asked that the playground “be a place where all children may experience hospitality, fellowship and peace.”

1. The DuraFiber Technologies plant off U.S. 70 in Rowan County could close unless a buyer is found by Sept.... read more