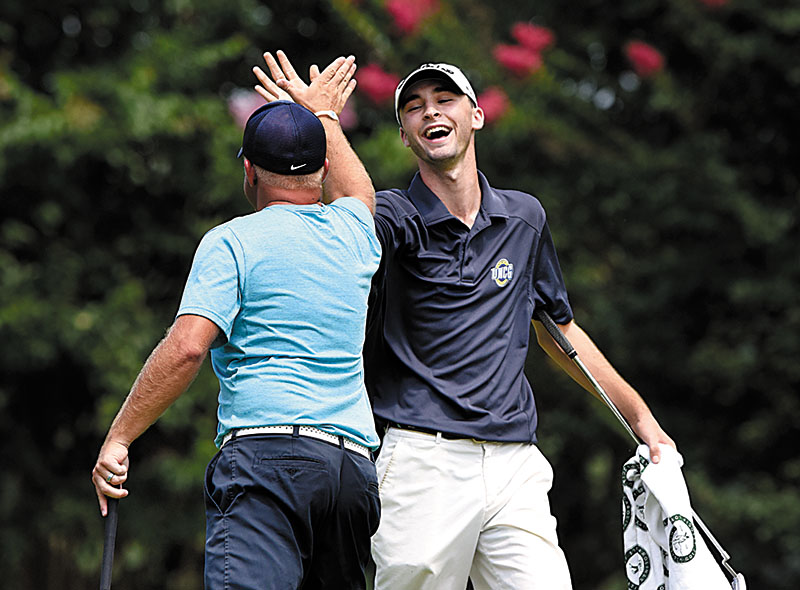 Keith Dorsett and Nick Lyerly celebrate with both making their putts on the 18th leaving them tied in the match. photo by Wayne HInshaw, for the Salisbury Post

SALISBURY – When the two best local golfers squared off Sunday afternoon for the championship of the 39th Horace Billings Rowan Amateur tournament, it was appropriate that the outcome was decided in dramatic fashion.

Defending champion Keith Dorsett retained his crown by rattling in a 15-yard chip shot birdie on the 19th hole to outlast Nick Lyerly 1-up. In a tight match featuring one clutch shot after another, both golfers felt the conclusion was to be expected.

“Neither one of us deserved to lose that match,” said Dorsett, 38, of Salisbury, as he won his fourth Rowan Amateur title. “We played great golf the whole way around. But in the end it is all about winning holes, one at a time.”

Lyerly, 18, who heads off to start his college career at UNC-Greensboro next month called it “…a match for the ages for sure. …I just had that feeling he was going to chip it in, I really did. It wasn’t that long and it was straight uphill and I am thinking he is probably going to make this.”

Based on the kind of amazing shots both golfers made during the hot afternoon, a chip shot was the only way to decide the match. Lyerly had a gross score of 6-under while Dorsett responded with a 5-under performance on the back nine to rally from one down. They made only one bogey each all afternoon and neither held more than a one hole edge in the finals.

“Keith is one heck of a player,” Lyerly said, “I knew if I was going to beat him I was really going to have to step up my game. Basically I did that but still it was not quite enough”

Dorsett’s win wrapped up three grueling days in 95-degree heat at the par 72 Corbin Hills Golf Club. Lyerly led qualifying for medalist honors with a 65 then he and Dorsett started picking off opponents one by one through three days of match play to set up a much-anticipated championship battle. The two finalists started their Sunday morning with semi-final matches and each won with relative ease by 4-and-3 scores. Dorsett topped 4th seed Shane Benfield while Lyerly defeated No. 11 Sean Kramer.

Ironically, although Dorsett and Lyerly have played a lot of high quality winning golf in the past several years, it was the first ever meeting of the two in a local match play event. They both consider Corbin Hills their home course and they have played many friendly rounds together, but they have never played each other in a local tournament. The first-ever face-off was worth the wait.

Lyerly broke on top at the turn, 1-up, thanks to a birdie on the par four 8th. But Dorsett responded by winning the 10th and the 11th with back-to-back birdies. Lyerly finally squared the match again on the par four 15th when he put his second shot within a few inches of the cup for a birdie. The final three holes were all classics. On 17, Lyerly pushed a birdie putt just right of the hole that would have given him the lead.

Then on the short par five 18th, both golfers reached the green in two. Lyerly putted first and drained a fist-pumping Eagle putt. Dorsett responded by hitting his Eagle putt from 10 feet to send the match to extra holes. “That was really something,” Lyerly said of the Eagle-Eagle finish to regulation. “You don’t see that very often but actually I expected him to make his after I made my putt.”

The golfers headed to the par four 1st hole to continue the match and Lyerly reached the green in two with a 20-foot putt for a possible birdie. In the meantime, Dorsett left his approach shot about 15 yards short of the green in the fringe right in front of the hole. He opted to chip it.

“If I had been five feet closer I probably would have putted it,” Dorsett said. “But there was too much fringe to get through and I would have had to kill it with a putt. So I basically took a smooth swing and just stroked through it.”

The ball landed in front of the hole and took one hop off the flag stick and into the hole for the birdie 3. Lyerly’s birdie attempt from 20 feet came up short and the match was over.

“I don’t know if that was my best shot of the tournament,” Dorsett said with a grin. But it was right up there in my top three.”

Dorsett’s Rowan Amateur crown came just a month after he also won his seventh Rowan Master’s title at the Warrior Golf Club. It was the third time he has won both the Masters and the Amateur in the same year. He next sets his sights on the local Dorsett-Crowder Labor Day four-ball event in September at the Country Club of Salisbury. He plans to team with Ryan Honeycutt in an effort to win the event that bears the name of his grandfather, A.D. Dorsett.

Lyerly, meanwhile, will play in a couple of weeks in the N.C. Amateur Match Play tournament. After that East Rowan grad is off to UNC-G to begin his NCAA Division I golf career.

So it may be a long while, if ever, before these two top golfers square off again.