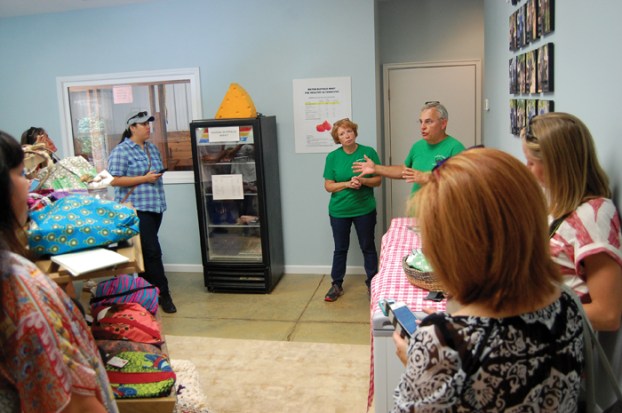 David DiLoreto explains the process of milking water buffalo to the group of bloggers there for the NC Department of Agriculture tour. (Jessica Coates/Salisbury Post)

SALISBURY – Fading D Farm has gotten quite a bit of acclaim since it opened three years ago.

The farm – located at 295 Fading D Farm Road in Salisbury – has been featured in the Charlotte Observer and Salisbury the Magazine. It also won several cheese prizes at the 2016 NC State Fair.

Fading D Farm is one of the few farms in the country the raises water buffalo – rather than cows – to make their cheeses and meats.

Heather Barnes, the marketing specialist for the NC Department of Agriculture who organized the tour, said that most of the group’s stops would be in areas around Black Mountain and Asheville.

“And as we were developing our stops someone suggested the North Carolina Cheese Trail, that we might want to make one of those stops,” Barnes said. “And so we pulled up the map for that and most of them were kind of out of where we were going to be. And then I saw this one and I was like, ‘Let me see what this is.’”

Barnes said that, once she realized that the Salisbury farm was dedicated to raising water buffalo, she knew that she had to fudge the idea of the tour being purely in Western North Carolina.

“We actually just came back down this way and we’re kind of making a loop just so we could come here, because it’s so unique,” Barnes said. “I mean, I had no idea this was even in North Carolina.”

Fading D Farms was founded by David and Faythe DiLoreto, world travelers who came back from a trip to Italy with a taste for mozzarella di bufala – mozzarella made from the milk of a water buffalo.

David said that, when he and Faythe returned to the States, they could not find anywhere nearby that made fresh buffalo mozzarella.

Now the couple has nearly 23 water buffalos, which they use to make fresh and aged cheeses as well as water buffalo meat.

Wearing emerald green Fading D Farm T-shirts, David and Faythe gave the NC Department of Agriculture group a tour around the farm, moving from their store to their fields to their creamery.

They introduced the bloggers – who were primarily from larger cities like Charlotte, Durham and Raleigh – to the water buffalo and their babies.

The bloggers were able to ask questions about the buffalos’ temperaments, nutritional needs and origins.

“Most of these are all food writers and they write about food. But part of knowing your food is knowing your farms and knowing where that food comes from. And for many of these people, if they’re living in cities, they may not know farmers,” Barnes said. “So it gives them an opportunity to make those face-to-face connections, learn more about how our food is raised, how it’s made and then be able to share that with their readers.”

Barnes said that the tours the NC Department of Agriculture organizes also showcase the diversity of North Carolina agriculture.

“So, for this tour, we’re going to a couple of farms that sell their produce to Ingles but we’re also going to a brewery – Pisgah Brewery – that buys produce from one of the farms we’re visiting and uses it in their beers,” Barnes said. “I mean, the diversity of North Carolina…we’re going to see everything from North Carolina tomatoes to North Carolina water buffalo cheese. Who knew?”

The tour group traveled to Salisbury, Marion, Black Mountain and Asheville over the course of their two-and-a-half day trip. It began on Wednesday and ended Friday.

By Mark Wineka mark.wineka@salisburypost.com SALISBURY — When the greeting, prayers, Scripture, acknowledgements and official words of dedication for a new... read more