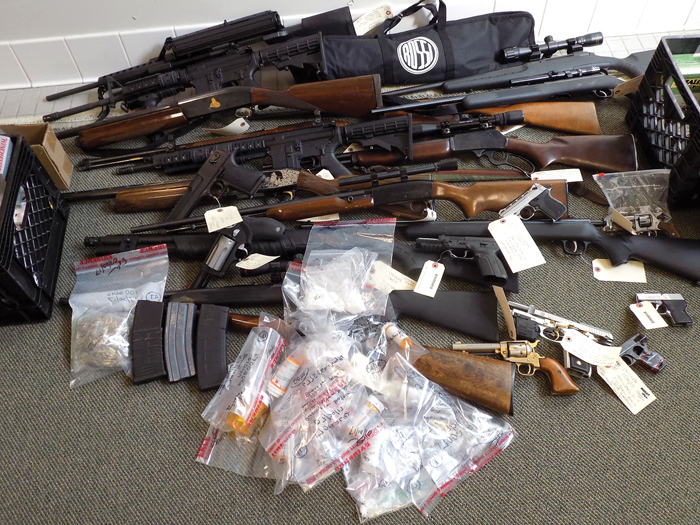 Submitted photo Some of the weapons and drugs that the Rowan County Sheriff's Office and the Department of Homeland Security found at the home of Daniel and Sherry Wood, who face multiple felony charges.

SALISBURY — After a yearlong investigation, a Stokes Ferry Road couple have been arrested on multiple drug and weapons charges.

The Rowan County Sheriff’s Office, along with the Department of Homeland Security, searched the home at 6775 Stokes Ferry Road on July 20. Daniel Dewayne Wood, 39, also know as Big D, and his wife, Sherry Lynn Wood, 43, live there.

Investigators have been looking into allegations that Daniel Woods was involved in the distribution of methamphetamine and prescription narcotics, as well as the purchase of numerous firearms.

Wood, who was convicted in Rowan County Superior Court in 2006 of felony cocaine possession, was prohibited from possessing firearms and ammunition.

During the search, investigators found about 61 grams of methamphetamine ice, 641 tablets of oxymorphone, 90 tablets of tapentadol, 151 tablets of clonazepam, and 25 dosage units of naloxone.

Evidence uncovered during the investigation showed that Wood was obtaining some of the prescription drugs legally from a pain clinic in Salisbury, then selling his medications.

Drug ledgers describing the sale of prescription drugs were found inside the home.

Investigators found a total of 27 handguns, rifles, assault weapons, and shotguns at the residence, as well as thousands of rounds of ammunition.

The Rowan County Sheriff’s Office is trying to determine if any of the weapons are stolen.

Investigators also found about $13,000 in cash

. A stolen Kawasaki dirt bike was found at the residence.  Also seized were two motorcycles and a pickup that were proceeds of drug trafficking, officials said.

Daniel Wood was charged with trafficking in methamphetamine, trafficking in opium, possession of a firearm by a felon, and maintaining a dwelling to keep and sell controlled substances.  Bond was set at $500,000.

Sherry Wood was charged with trafficking in methamphetamine and maintaining a dwelling to keep and sell controlled substances. Her bond was set at $25,000.