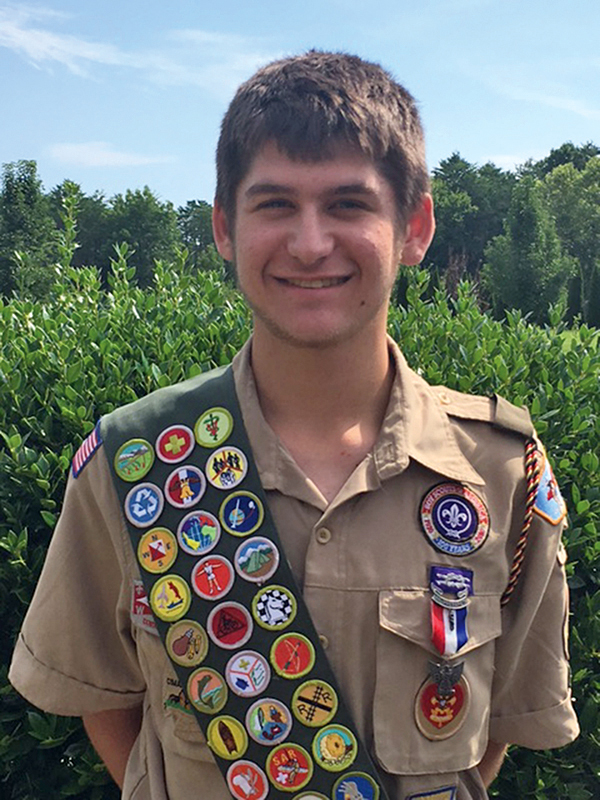 Noah was a Cub Scout in Pack 442, where he earned the God and Me, God and Family and Arrow of Light awards.

As a Boy Scout in Troop 442, he earned 29 merit badges.  He also earned the God and Church award and two 50 Miler awards, one for canoeing and one for hiking.  He is a member of the Order of the Arrow.  Noah completed an extended backpacking trek at Philmont Scout Ranch last month and earned the Philmont Arrowhead.  He served as a Den Chief, assisting with the leadership of Cub Scout Pack 442 for three years.

For his Eagle Scout Leadership Service Project, Noah planned and coordinated the work of youth and adult volunteers to develop the Walker’s Creek Trailhead on the Uwharrie Trail by building a split rail fence, adding storm water runouts and installing a fire ring for campers.

Noah is a student at East Rowan High School, where he is a member of the Marching Band, Jazz Band and Wind Ensemble.  He was one of the founding members of the East Rowan chapter of Tri-M Music Honor Society, for which he is Treasurer.  He has been a member of the All-County Band for five years and has attended the Summer Music Camp at the University of North Carolina at Greensboro for six years.

A member of First United Methodist Church of Salisbury, Noah is a member of the FUMC youth group and participated in Carolina Cross Connection.   He has been an acolyte for regular and special services for six years, and is Youth Representative on the Church Council.

He is the son of Neal and Sandy Powell of Salisbury.

Joe and Debbie Sabat of Warren, Ohio, are pleased to announce the engagement of their daughter, Carly Sabat, to Zack... read more