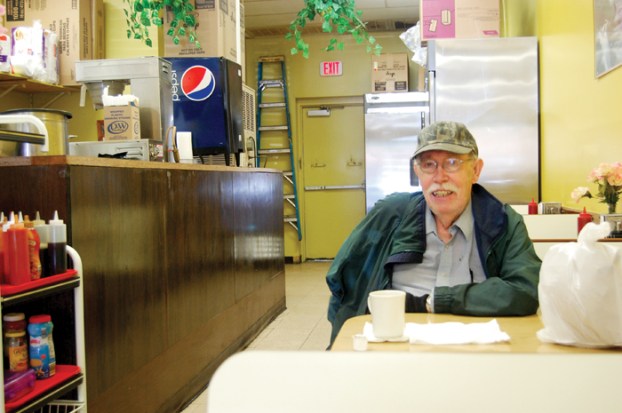 Walt Bradshaw poses in "his" booth at Jeter's Deli. Bradshaw has been getting his breakfast and lunch at Jeter's for the last 14 years. (Jessica Coates/Salisbury Post)

Jeter’s Deli – a place for everyone: Restaurant enjoys a loyal following

SALISBURY – Walt Bradshaw has been coming to Jeter’s Deli for the last 14 years, and he orders the same thing every day.

Two eggs, scrambled. A side of bacon. Fruit. Wheat toast. A cup of coffee.

“And it’s kept me going since ’99. I get good check-ups from the doctor and my insurance nurse comes by to see me every now and then. And they say, ‘What do you credit your health to?’ I say, ‘Well, I think it’s good food,’” Bradshaw said.

Bradshaw, who is a retired sales engineer, has lived alone since he and his wife separated in 1997. He said that coming to Jeter’s to get his breakfast — and his lunch — gives him an excuse to get out of the house.

“I get a lunch carry-home because I live by myself and I don’t have anyone to cook with or cook for or even cook for me,” Bradshaw said. “Jeter’s has got a lot of friendly people here. And most of them are like me, they’re all retired. And we get lonesome. And we come here and it’s just like coming to somebody’s house.”

“One customer comes here at 5:30 in the morning every day,” Patel said. “Before we even open, he’s got to be here first.”

Patel said that the man always orders the same thing, so they named it after him – the Robert Special.

“Scrambled eggs, cheese, grits on top of the eggs…And when all of his friends come in, they say, ‘Oh, I want the Robert Special,’” Patel said.

Patel has owned Jeter’s Deli for the last 19 years. Before that, a man named Jeter owned the restaurant for five years.

Patel said he has a few customers who have been coming since before he even owned the restaurant.

He said he also has steady employees and a consistent menu, which appeal to the restaurant’s loyal diners.

“We’ve had many of the same (things) for the last 19 years; we just add a couple of things here and there,” Patel said.

Patel said that, in addition to retirees, Jeter’s also has a loyal lunch crowd made up of workers who want something quick — usually a sandwich or a salad.

“So it doesn’t take long to prepare. And some of the stuff, sometimes we say, ‘Oh, we’re going to sell this much stuff,’ so we kept it ready. And when they come in it’s ready to go.”

Jeter’s Deli is only open for breakfast and lunch, so people like Bradshaw have to go elsewhere for dinner. But, in recent years, Patel has expanded the restaurant’s hours so that it is open on Sundays.

By David Shaw sports@salisburypost.com SALISBURY — You have to wonder if Keith Dorsett was double-parked Saturday at Corbin Hills Golf... read more