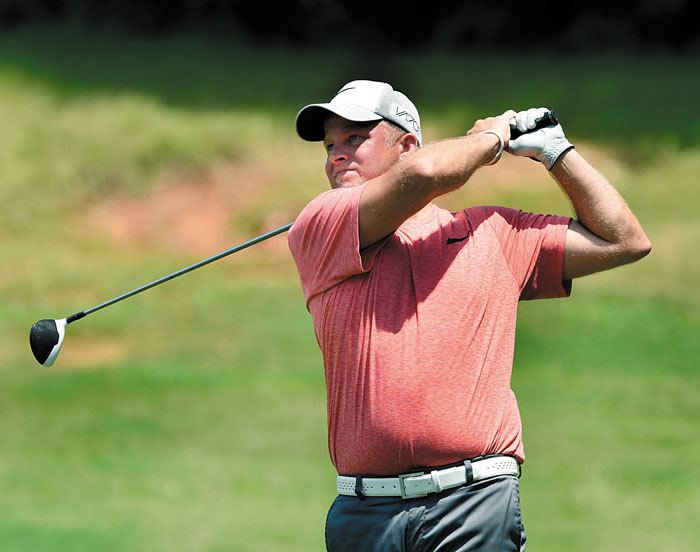 Keith Dorsett tees off in the Horace Billings Rowan Amateur Golf Championships at the Corbin Hills Golf Club. photo by Wayne Hinshaw, for the Salisbury Post

SALISBURY — You have to wonder if Keith Dorsett was double-parked Saturday at Corbin Hills Golf Club.

The 38-year old was first off the course in both the morning’s second round and the afternoon’s quarterfinals in the 39th annual Horace Billings Rowan Amateur championship.

“Well, when it’s 95 degrees you don’t want to be out there all that long,” the defending champ  said. “Any time you can finish a match early, it’s a good thing, especially on days like this.”

Playing under a blanket of heat and humidity — the heat index actually touched 110 — Dorsett made quick work of two opponents and cruised into this morning’s semifinal round, where he’ll square off with fourth-seeded Shane Benfield. The other semi pits No. 2 Nick Lyerly against 11th-seed Sean Kramer.

“I’m not ready to pass the torch yet,” said Dorsett, who also collected first-place trophies in 2007 and 2012. “Nick is a great golfer with a heck of a future in front of him. Corbin Hills may be his home course, but it’s also mine — and I’ve been roaming around here for 35 years.”

Dorsett played like he owned the par-72 expanse. He carded 11 birdies and two bogeys and needed only 28 holes to eliminate Ryan Burke and eighth-seeded Kevin Lentz, both by 5-and-4 scores. In the quarters against Lentz, he announced his intentions with birdies on the first two holes and was 5-up after nine. Lentz bogeyed Nos. 4 and 5 and never recovered.

“I got off to a hot start,” said Dorsett, who captured last month’s Rowan Masters crown. “It’s a matter of trusting your swing, hitting good golf shots and making putts. I’m defending champ, but you’ve still got to make shots and make birdies if you’re going to win this thing.”

Benfield makes his second appearance in the semifinals after besting Mike Parker (1-up) in the second round and Mitchell Swaringen (1-up) in the quarters.

“I made the final in 2010 and lost to Ronnie Eidsen,” he recalled after some coaxing. “I had to beat Phil Miller and Ryan Honeycutt to get there. It was a tough round that year.”

The 36-year old was equally resilient yesterday. He went 18 holes in both rounds and secured a semifinal berth when Swaringen lifted a tee shot out of bounds on No. 18.

“That opened a window for me,” Benfield said. “I had a birdie putt on 18 but parred it because I was playing conservatively. But it was neck-and-neck all day, a day of survival in this heat. I just had to play smart golf.”

Today’s semifinal match will be his first against Dorsett. “I feel like I’m getting ready to play Tiger Woods,” he said with a smile. “I’ll just try to play my game and not worry about anything else.”

Lyerly — the 2015 Amateur champion — said he wasn’t at his best Saturday, but try telling that to 15th-seed Ross Brown and No. 10 Adam Jordan. He was 1-under par in both rounds, but prevailed 2-and-1 against Brown and 3-and-2 against Jordan.

“Out here I expect to do better than 1-under,” said Lyerly, the 18-year old wunderkind who qualified as medalist with a 7-under 65 last week. “It got me through today, but tomorrow I’ll have to shoot better if I hope to win two matches.”

Lyerly birdied the eighth, ninth and 11th holes to go 2-up and take charge in his morning match with Brown. Against Jordan, he was down one at the turn before the challenger self-destructed a hole later.

“Adam flew the green at 10, which led to a bogey,” Lyerly said. “I made a short putt for birdie to pull even.”

Now comes a match with Kramer, the surprise semifinalist who ousted Lyerly’s father Roger in Friday’s opening round. “I’ve been to the finals twice,” he said. “And I know what it’s like and what to expect. I’ll be ready.”

Kramer can’t wait. He’s playing with renewed vigor and confidence since finishing second to Dorsett in the Masters — then lurching past sixth-seeded Steve Honeycutt (5-and-3) and fourth-seeded Derek Lipe (4-and-2) in yesterday’s rounds.

“You know what it is?” the 32-year old offered. “I put my driver in my bag and quit using it. I haven’t even given it a chance. I’m using my three-wood, which gets me right where I need to be.”

He used it to pull off a pair of convincing upsets. Honeycutt fell easily and Lipe received a bit of gentleman’s-comeuppance. “He knocked me out of this the last two years,” Kramer said with a sideways glance. “I normally make it to the elite eight and then get beat. This time I was just hitting it well all day.”

Kramer won two of the first three holes to go 2-up and led by three after nine. The key may have come at No. 1, which he parred and Lipe bogeyed.

“Going 1-up right away is like having insurance,” he said after making three birdies. “After that I just kept hitting fairways and stayed consistent until the end.”

Today’s scrap with Lyerly presents another challenge. They’ve never faced each other head-to-head, but Kramer and Andrew Morgan lost a 19-hole match to Lyerly and his dad in the 2014 Labor Day tournament.

“I’ll definitely have to make more putts,” Kramer acknowledged. “Nick’s a great player who deserves everything he’s won. But if I play a consistent round, I just may be able to bring it home.”